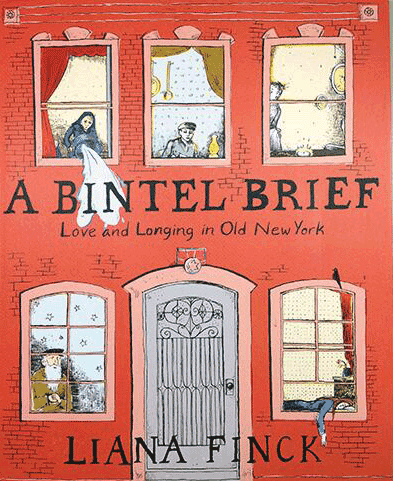 There’s a new sort of fiction circulating, stories of young people, by young people, for young people. This isn’t YA lit. These stories range across genres, even mediums, but they all describe the ambivalence of maturing in post-post-modernity. These narratives share a sense of lostness and reflective self-estrangement. The authors are smart and the narratives are smartly-dressed. They usually take place in New York. Think Frances Ha or Tai Pei or Girls. And if, as one well-respected author of such fictions has recently described them, they at times seem “cold, lazy, [and] artificial,” they also exhibit “extreme honesty and thoroughness of […] self scrutiny.”

Liana Finck’s new graphic novel, A Bintel Brief features one such young me-person; but, although the story mines her development as an artist, it does so by digging into the past. With the distance afforded by history, and supported by the graphic novel’s relatively diffuse gaze, Finck offers a warmer, and more engaged account of a remarkably persistent theme: how one comes to feel that they belong to a community. 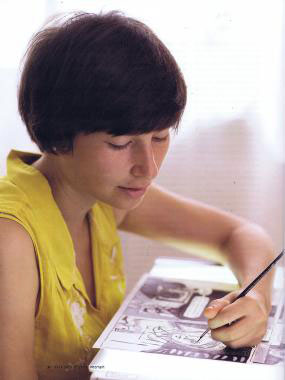 Finck foregrounds this theme early as her narrator inherits a book of newspaper clippings from her grandmother, old cut-outs of the “Bintel Brief,” an advice column authored at the turn of the 20th century by Abraham Cahan, the editor of the Yiddish newspaper The Forward. The clippings scrapbook turns out to be a magic artifact of sorts when it brings to life a phantom Cahan himself. He becomes the narrator and guide, explaining and fleshing out the lives preserved in each letter. The book proceeds as a sequence of vignettes, mostly black-and-white panels, Finck listening inquisitively to Cahan’s stories.

The time-traveler Cahan is out of place in contemporary New York. His arrival here brings forward the historical experiences of immigrant Jews—the readers of his newspaper—who came to America to find their family and friends, and found them changed from when they knew them in Europe. Subtending these threads is the delicate matter of absorption into “American” culture, a theme Finck treats with judicious subtlety. In some sense, the theme of belonging comes with the territory: New York is a city of plurivocality, an ideal that Finck enthusiastically invokes through the English literary tradition when she paints Cahan quoting Shakespeare on the diverse beauty of man as they walk through Times Square. Even voiced by a time-traveler, it resounds from the heart of her text with remarkable sincerity.

Each story recounts the predicament of a single letter, which is a great formal device since each missive bears with it an urgently felt and discrete plot. The form allows Finck, through Cahan, to gently resist narrating solutions. The advice Cahan offers only ever appears as text, and never comes to visible results. The invisibility of resolutions comprises the great empathy of Finck’s book—there may not be any thoroughly satisfying solution to these problems. 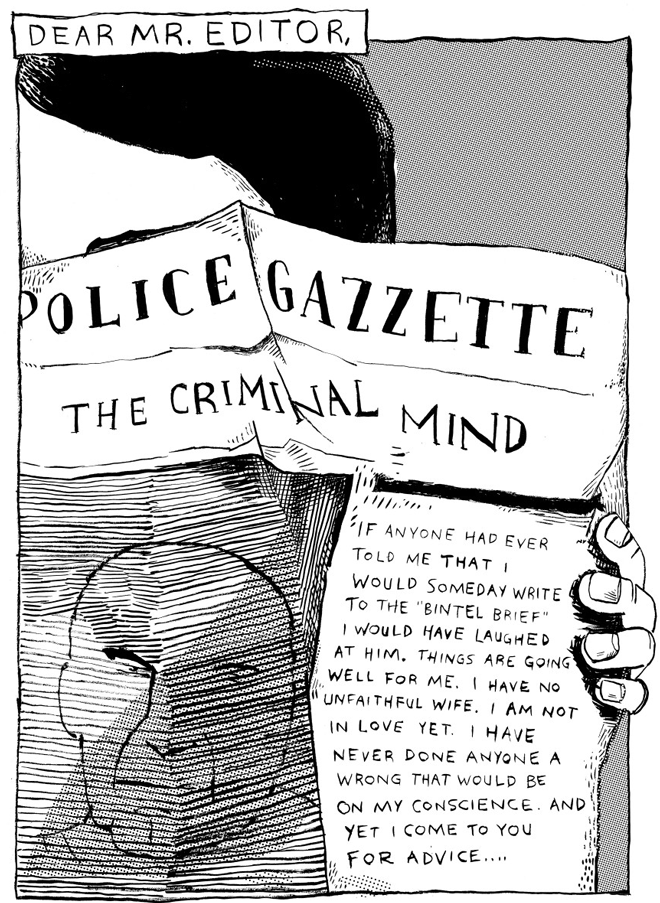 The thematic contrast between advised action and represented life gets at the most powerful formal element of the graphic novel, its fusion of image and text. Finck’s images vividly and gratifyingly give flesh to a world intently concerned with reconciling two tense imperatives: on one hand, there’s the necessary struggle to make ends meet in a new land; on the other, there’s a struggle to keep faith in what can’t be materially guaranteed—the affection of a lover, for instance, or the closeness of distant family, or a felt religious belief. Finck’s graphic style emphasizes their more intense, though varied experience in earlier times. In the black and white episodes, she frequently uses a heavy line to give a sense of shadow and darkness. Yet often, her objects, particularly the human bodies, appear pliant and fluid. For example, in the first chapter, “The Watch,” she begins the story of a frustrated mother by using strong lines and sharp objects: a pencil, a sword, the eponymous timepiece. By contrast, the eleventh chapter, “A Faithful Reader,” represents a story of unassimilated melancholy and trauma with phantom-like shapes and strangely-placed items in Sarah, the letter-writer’s room. The shlemazl, the oppressive spirit, an encephalitic stick-like figure, is rendered with only slightly less solidity than Sarah. These vividly represented problems might long for resolution—the narrator/artist pleads with Cahan to tell her how they ended—but to offer such closure in the text would compromise their emotional integrity. 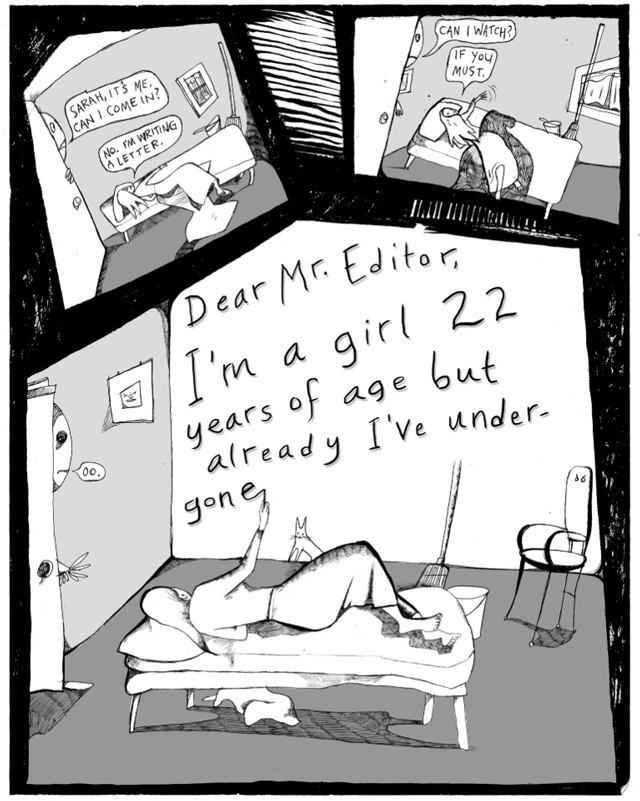 The strongest stylistic connection between these sections—the stories of the past and the story of how we come to know the past—is water, as both motif and medium: the line-drawing waves on the title page represent the same waves that bear immigrants to New York; water reappears as the tears that fall down faces throughout the book, indicating strong feelings that persist through history; it’s transformed into the soup that Cahan longs for and that Finck learns to make. Most importantly it is the medium of choice—the watercolors—of the sections of the present. It is the substance of the conversations between Cahan and the protagonist. It is the medium in which Cahan becomes modern—shaving, putting on modern clothing, walking through the city—and it is the medium in which the artist grows more historically aware, eventually initiating her own proper research into her family and her city’s history. The liquid blue of these sections quietly carries through each of the black and white episodes, highlighting an emblematic object of struggle or anxiety. 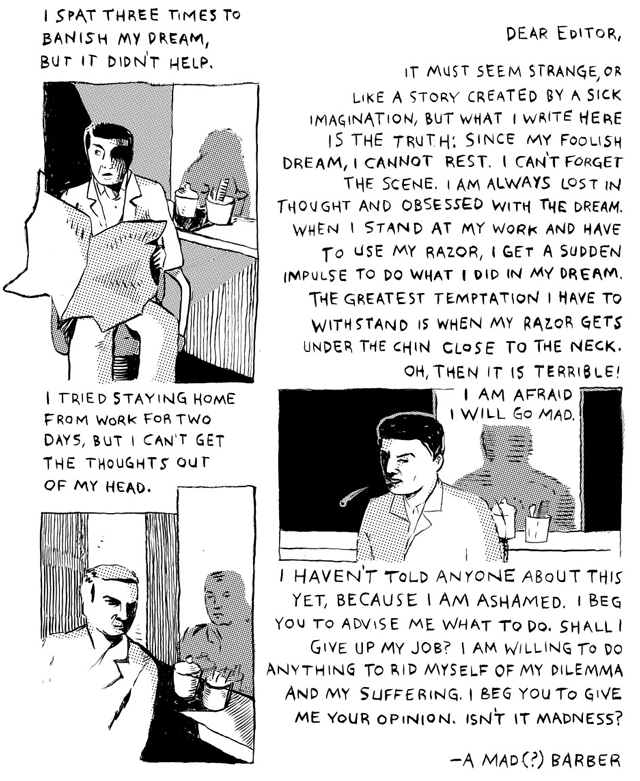 It’s easy to want to over-interpret these blue objects—a hat, a tangle of yarn, a singing bird—as they progress through each chapter. Finck recurrently illustrates dreams in these episodes, and that dense nexus of narrative and symbol isn’t neutralized by the fact that Cahan, until he decides to get a modernizing shave, looks suspiciously like Sigmund Freud. The chapter in which Finck illustrates Cahan discarding that self-presentation is itself one of the most politically unsettling dreams of the book. In that chapter, “The Mad(?) Barber,” the letter writer, a barber, describes dozing off at work, and dreaming about cutting off the head of a disrespectful customer—but that customer is George Washington! He is so disturbed by the dream that he’s tempted to murder his real-life customers. The political implications of such a dream echo in the scene when Cahan, walking through Times Square, chooses to quote Shakespeare (“O wonder! How many goodly creatures are there here! How beauteous mankind is!”) to express desire for expansive community rather than, say, Whitman, the more locally famous bard of social sentiment (“I loved well the stately and rapid river;” he writes, for example, in “Crossing Brooklyn Ferry,” “The men and women I saw were all near to me”). These passages indicate justifiable skepticism toward the promise of the American dream through history. The format here is especially powerful in framing that skepticism historically: it is a dream that haunts a man, who narrates it in a letter that is then published in a paper, and here drawn in a graphic novel. There is no singular voice expressing a grievance at America, but a collective, through dream-work. Here, Finck is at her best, most dynamically participating in a historical community. 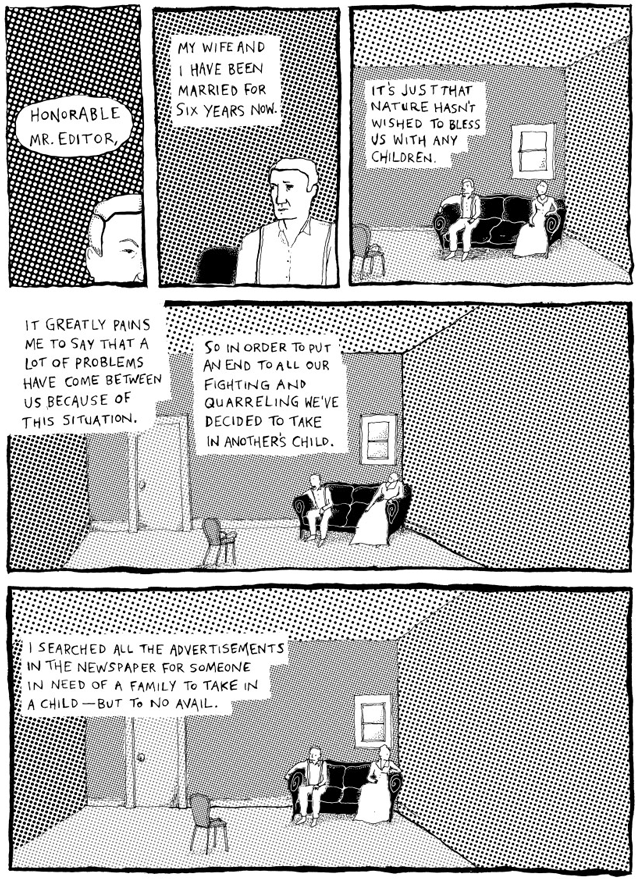 Cahan’s advice columns show off his commitment to close listening and observation, but he does not aim to interpret dreams, despite the implicit desire of those letters. Instead, he’s more concerned with the urgent pragmatism of lived life: “The writer of this letter,” he responds to the mad barber, “must simply laugh off the dream and drive the whole matter out of his head…he himself must be strong and overcome his impulse.” And to some extent, the protagonist of the novel takes up a contemporary version of that advice when her spirit friend leaves her, lonely, to get to the work of the present. And this is the singular weakness of the book: the delicacy of the present never rises to the challenging boldness of the past. The last pages thematize her personal development, and represent it as a problem comparable to those that came before: (“Editor, my spirit has left me and I don’t know who I am anymore”). But the novel is reluctant to clearly describe the struggles of the contemporary artist, how she got there and what symptoms she sees. She appears therefore distinctly immune from the urgently felt struggles of her community’s history. It has the effect, at least, in the text, of holding her apart from affective belonging to the historical community she so sympathetically represents. In the final panel, she claims that “some things can’t be put into words.” 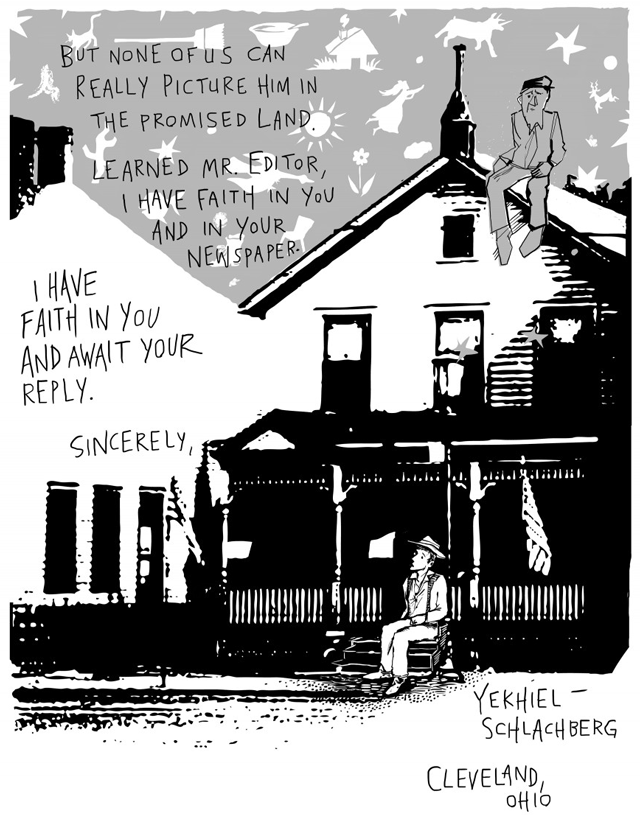 There is much to honor about the ineffable, and much to value in the unique potential of images, certainly. But if the blues of the present permeate the strong monochrome of the past, certainly the present too, can benefit from the past’s bold line. This is less a failing than an opportunity for a certainly flexible author like Finck. Her scrupulous and sensitive readings of the past, of the historical experience of lostness and estrangement can only strengthen her intuitive, if, here, vague representation of the contemporary youthful search for love and belonging in New York. Indeed, her work, in its anachronism, points to what might be missing in this crop of recent works: attention to the affinities with the experiences of the past. We can trust that she’ll continue to develop this cross-historical connection with no lack of subtlety or style.