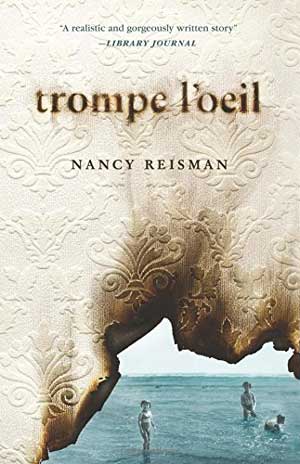 Does a good life play out like a well made film? Nancy Reisman has published two excellent books—a prize-winning collection of stories, House Fires (it won the Iowa Award for Short Fiction in 1999) and a novel, The First Desire. Now her second novel, just published by Tin House, Trompe L’Oeil, comes along and almost tricks the eye to thinking it is about a real family, or perhaps about what we can learn from a carefully curated assemblage of painters (descriptive response to their work is incorporated into the novel) including Edouard Vuillard, Michelangelo Merisi da Caravaggio, and Georges de la Tour. Still, there is something more exciting at play in Trompe L’Oeil than the saga of the Murphy family or the discussion of visual art within the novel. This is a novel that finds beauty and resolution by testing how real life and literary art are like filmmaking.

Reisman can sound like Virginia Woolf, but her experimentation also places her in the company of contemporary film directors like Terence Malick and Richard Linklater. If she has written a love letter to cinema, it’s not a traditional or straightforward letter. I don’t think anyone in the Murphy family ever so much as steps a foot in a movie theater in the many decades that we follow them. We hear about great painters, but no filmmakers, no directors, no actors. Instead, we can understand the Murphy family itself as a stand-in for a film being made. Moments accumulate to form their story, and we read of these moments sequentially.

Trompe L’Oeil is a literary “Girlhood” to Richard Linklater’s quietly experimental film “Boyhood.” Both Reisman and Linklater—like Virginia Woolf—care about moments. Late in “Boyhood,” we witness this conversation between the just-arrived-at-university Mason Jr. (the boy at the center of the film) and a girl he’s just met, sitting on a rock in the middle of a vast, beautiful desert landscape:

Girl: You know how everyone’s always saying seize the moment? I don’t know, I’m kind of thinking it’s the other way around, you know, like the moment seizes us.

Here’s Reisman in Trompe L’Oeil: “The world as one knows it is only the world of a moment, isn’t it? Then there is another moment, another world.” 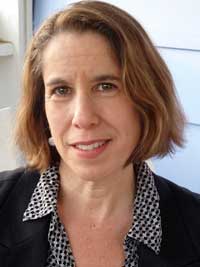 To make “Boyhood,” Linklater regrouped every year over the course of twelve years with his cast and crew; the actors aged along with their characters during the filmmaking. Linklater lets his audience experience both weight and pleasure in witnessing time change not only his characters but also his actors. The film itself, because of the way it was made over time, reminds us of the sequential nature of cinema, one frame following another, like moments, minutes, hours, and twelve years.

In the course of the twelve years making “Boyhood,” one of the young actors, Linklater’s daughter Lorelei, at one point wanted out of the project. She asked her father if he couldn’t, possibly, just kill off her character. He said no, the death of the character would be too dramatic for the story to bear. By coincidence, this plot point—a young child’s unexpected, random death—is a central moment that informs everything that follows in Trompe L’Oeil. The death of this young character risks melodrama and trying the patience of readers. But where “Boyhood” with its twelve-years-in-front-of-the-camera cast is a story about continuity, Trompe L’Oeil, constructed of words, is all about disruption. When “Boyhood” comes to its close, it illuminates that it has been built of a sequence of present moments, none necessarily more important than another. Trompe L’Oeil will show us that a weighty moment in a family’s life can be balanced by what comes next.

Trompe L’Oeil introduces us to the Murphy family arriving at what should be a very sweet moment in their lives. The father, James, has just been promoted and the family goes off to Rome to celebrate with a family vacation. Little Molly tours a church with her mother and older sister. Soon afterwards, from the church steps, she sees her father and brother across the street. It might be her pleasure in seeing them wave that leads her to step into the street toward them—we can’t know why she does so. She’s struck by a white delivery truck and a little later dies in the hospital.

The death of the child becomes an image—like a film still or a photograph—the characters repeatedly return to and try to understand. What does Molly’s death mean to each of them, and at different moments in their lives? How will this death continue to alter what the story of this family becomes? It’s also as though a reel of film, the film including Molly, has gotten lost; past age four, there’s no footage of Molly for the filmmaker to work with.

When a parent buries a child, we feel the sadness of life not proceeding in the expected order. The desire for order is striking in Trompe L’Oeil, particularly as felt by Molly’s older sister, Katy. After graduating from college, Katy agrees to move in for the summer with her boyfriend. She is soon taken by surprise by the disorder and its effect on her: “Here inside lay the crusted dishes, here the dirty laundry, despite her efforts. Again disorder had replicated; again the day confirmed that her simplest desires—the clean space, a conch shell on a bare wood table—were irrelevant; she herself irrelevant.” Katy’s great sadness does not end there. The clean space, the bowl of apples, and the order that Katy longs for are, in fact, things that were known to her in her mother’s home. She spends more time in her mother’s home over the summer—one way of regaining equilibrium. The feeling of disorder, of their lives being somehow out of sequence, will be corrected late in the Murphy family story when the children will go to the funeral of a parent.

Sara, a sister born after the Rome trip—one of two girls born after Molly’s death—will grow up with an awareness of “a gap” in the family. Sara experiences Molly as fictional—a character in the family’s story, talked about, but not someone she has ever known as a living person. They have lived in different time periods. Sara’s experience during her own trip to Rome, then, is rather extraordinary. Looking at a Raphael portrait of a girl—La dama con liocorno—she has the sensation of how alive the figure is: “As if in fact you see each other.”

There isn’t really reciprocity in the relationship between Sara and Molly, but what Sara sees in the girl in the painting—and by extension, in Molly—is reflected back to her. When Sara looks at Raphael’s striking painting that so strongly affects her, I would guess that she understands that to create such a portrait, Raphael must have viewed a real person who was his model, someone who was as full of life then as Sara is right now, at this much later moment, while she registers the beauty of the picture. This recognition—a sense of the real life of a person not living in one’s own time—sets Sara free.