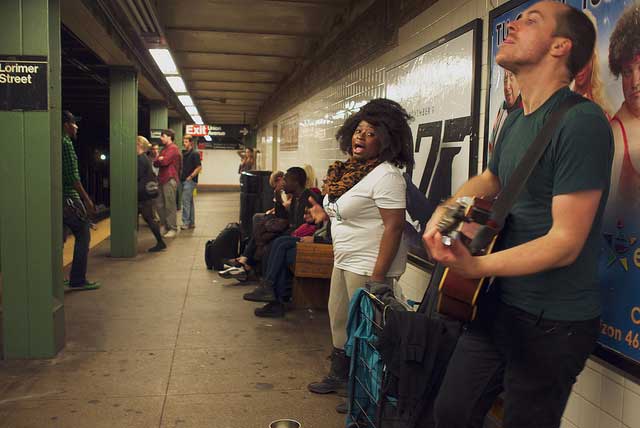 ON THE Q
By Tricia Park

Someone is singing “Rocket Man” on the opposite side of the NQR stop at Prince Street. “I miss the earth so much, I miss my wife; It’s lonely out in space; On such a timeless flight.”

The black pillars stand tall, sprouting like steel trees from the train tracks, holding up the street as the singer’s guitar competes to be heard over a trumpet wailing at the far end of the platform.

Now the downtown train blows its horn, a loud f-sharp, and through my earplugs it sounds like an amplified cello. I look up, expecting to see a cellist somewhere and wondering if it’s someone I know, someone I went to school with. And I think of you and the day you played your cello outside in Central Park and how that brown beagle stopped and wouldn’t leave, holding his owner steadily in place, ignoring every tug and pull to head home. Children and animals stopped and stared the most.

When we were still students, you and I found a shaded spot in the park and played there all afternoon. Young mothers with strollers, laughing schoolchildren, businessmen in suits trudging their way across to the Eastside. It was the first real day of spring and the freshly cut grass smelled like hope. We played Beethoven and Mozart and Playel and Mazas and LeClair, and we played a million wrong notes and a few right ones.

Around three o’clock, a crowd of kindergarteners formed a semi-circle around us, sitting cross-legged with their hands folded in their laps. One little girl, towheaded and bespectacled, sang, “Criss-cross applesauce, spoons in the bowl.” Mothers and nannies waited, standing behind them. Unnerved because we hadn’t expected people to stop and really listen, we became reverent in the light of our young audience’s gaze. We tried harder and even the city seemed to hush, respecting our efforts and the attention of our small guests.

Our fans left as quietly as they came, into the twilight. We’d made about a hundred dollars in those hours and we counted our stash sitting in the grass, gleefully stacking piles of coins and smoothing out wrinkled dollar bills against our knees. Near the bottom of the pile was a note: ‘Thank you for your beautiful music.’

We ate out that night. Drank wine, even. We had some money left over, and as we walked home through Chinatown, we held hands without gloves for the first time since winter. You walked on the outside of the sidewalk nearest to the curb. A delivery man whizzed by on his bike, so close that his plastic bag of food grazed your knee. You turned to cover me and we stopped, my face buried in your chest. You smelled like cedar and bread and you said, Marry me, into my hair.

I looked up into your eyes and wished for the certainty I saw there, shining and hopeful. I felt a thudding but I could not tell whose heart it was: mine, yours, or both.

The wheels of the arriving Q train screech against the tracks. The sound is piercing and I press my earplugs, wincing. It is rush hour and the train is full. I step inside, wedging myself into the car. The doors start to close but knock against my violin case, strapped to my back. I inhale and press against the woman in front of me, apologizing under my breath. She doesn’t reply as she bobs her head in time to music I cannot hear, white earbuds framing her face. The doors bang shut and I struggle to keep my balance, my hand cradling the side of my violin case. As the train races into the darkness, the windows flash like the beginning of a black and white film.

Soon I will arrive at the Fifty-Seventh Street station and climb the stairs up to the pavement. The wail of ambulance sirens will replace the rumble of the subway. I will see my name on the scaffolding surrounding the Hall, ever more surreal for its placement next to a picture of a very famous, very blond singer. I will wave hello to the guard and he will buzz me in through the backstage door, nodding.  I will take the far elevator to the third floor to my dressing room, where there will be bouquets in front of the mirror and dresses hanging from the cool metal rod, like ladies in waiting.

I will turn the volume down on the overhead speakers as the orchestra warms up onstage, muting all its voices, from the low rumble of the basses and cellos to the pealing tweets of the flutes and piccolo. I will begin the small rituals: the careful application of makeup (lipstick always last, the practiced strokes of the brush steadying my hand); the three pieces of dark chocolate; the small diamond earrings my grandmother gave me on my sixteenth birthday.

I will warm up with scales and go through the concerto slowly, methodically, like tracing the lines on a well-worn map. The stage manager will tap on my door, first with a ten minute call, then five. I will walk the dim corridor to the stage door, the train of my gown fluttering behind me.

The door will open, casting a long rectangle of light on the dark floor and letting in the sounds of the audience, rustling and coughing.  The people in the front row will turn and peer in, trying to catch a glimpse before I enter.

I will stand and wait, a thudding in my chest. But this time it will be my heart, alone. 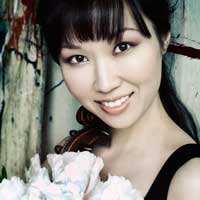 Tricia Park is a concert violinist and violin/viola professor at the University of Notre Dame. The recipient of an Avery Fisher Career Grant, she has appeared in concert on five continents and is also Artistic Director of MusicIC (www.uiowa.edu/musicic), a chamber music festival based in Iowa City that explores the connection between music and literature. This is her first published written work. To hear Tricia play, visit www.triciapark.com.