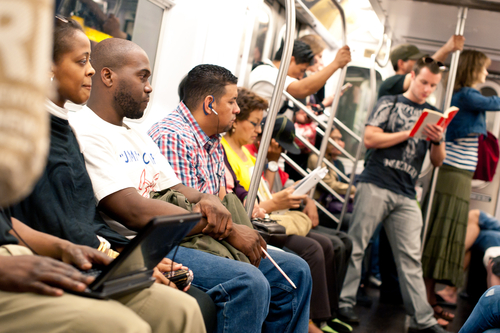 FALL ON ME
by Melissa Sarno

I’m on a crowded subway, clutching a heavy book that requires two hands not one, but where to place my fingers? On the warm metal pole, or balance, maybe lean, against a door or a railing where the puff of a stranger’s sleeve already peaks through.

I’m lost in rolling sentences, in the rain of words, and I am close, too close, to the tangle of her hair and the backpack strap slapping at my wrists, with my messenger bag smashed between an angry stare and the dull hum of his headphones.

When she comes on, I’m pushed by someone else and then I’m flailing, slipping from the grip of memory where the period had nudged up against a space. I wonder which word had come before it, which might come next, because suddenly the page is a mash of words I have to puzzle together, like the time I lost a fluttering bookmark to the water on the tracks and there went my place.

She talks of the goodness of God and I would mind it if she was yelling, like the others do, but she’s just talking, like we’re listening. She likes a crowded train, she says, and God is still good, and maybe that’s where I’ve found the extra o, the roundness of it, in the sentence I have had to let go of, because the train has tossed me again, and my hands are tight to the crinkled binding of the book, not at the slip-away railing, where they should be, and as I falter, then find footing between one crooked-heeled boot and a tattered shoelace, she says, It’s okay. You can fall on me.

And, usually, I wouldn’t say a word, not so early in the morning, not to someone basketball squeak dribbling, dribbling about the goodness of God but she’s just talking, like I’m listening, just that way, so I say, and I don’t know why I do, I say, Thank you.

You can fall on me, she says again. I’ve got nowhere to go. 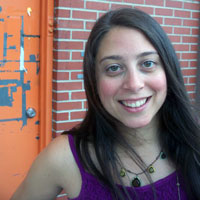 Melissa Sarno is a writer and producer living in Brooklyn, NY. She studied Communications at Cornell University and received an MFA in Screenwriting from Boston University. After a few years working in television production, she made the switch to children’s media. When she’s not writing elegant prose for preschool toys and games, she writes novels and short stories. She’s currently seeking publication for her first novel and is at work on her second. She blogs at http://melissasarno.com.