Them you can ever hear, the mouettes. When walking by the sandy concrete of empty storefronts, the apartments next to the sea, with their windows closed tightly.

Them you hear from your windows open as you write at the desk. Them you hear in the breeze, as you walk the overpass beside the colossal, four-story clouds. The clouds that swell up from the ground are pure. They are floating across the rails and they are making that you stop. They come from elsewhere and they are not staying.

The mouettes you hear when the streets are quiet, when the air is thick, when everyone else is gone, boarded up, closed behind windows with only the low murmuring, the clinking of forks.

It is raining and the walking people are shining in the puddles. The wind ruffles the ash trees speckled and furrows the silver leaves. The light is skittering between the shadows of figures who shuffle back and forth in the street. The university sits quietly behind the boulevard, the ugly, pushed-in windows covered behind the courtyard unruly.

The tram is gliding slowly through the water. It is saying in voice robotic: Université. Then it is swallowed by the bridge. It ends simply. Beneath clear, speckling rain.

In the darkness, the rail of the tram glistens. The three girls pass between the streetlights, and the one is holding out her arms when she speaks slurred, indignant. She trips on the rail and you are content she goes home with you.

You must be very careful of him, you tell her. He is méchant. He is the first person that I meet here. He is very bad.

Because she take the drugs she does not know the guys have placed bets on her.

I don’t understand why they think they can take whatever they want, she says.

You don’t say anything.

The woman with the clear blue eyes does not blink as she looks at the students, those that crane their heads over the notebooks. The yelling in the street is seeping through the windows with the climbing heat.

Someone is chattering in the back corner in a low voice. The sun is growing stronger through the cracked glass.

October the rain is thick, blinding. The wind tears out the leaves of trees that bend in its enormous power. If you close your eyes you can see August clearly, picture the smashed-up bodies of automobiles piled next to the train tracks. When you found something exciting and new about all the cars you’d never seen before, stacked—red, blue, green, orange, black. Something about the gleaming, acrylic-blue floors of the sunlit train, the excited voices chattering around you in a language you hardly knew.

The last morning. The hasty goodbyes and shoulders rocking against the windows of the train car. She had sat across from you, folded her arms and then her ankles. She had grinned at you haughtily, as if you two were sharing some secret.

Thank God, she kept saying as the train pulled away.

And you had said it too, but then you were looking back at the platform, at the young men shuffling in sagging sweatpants, at the sky discoloring above them. Thank God for going elsewhere. But where?

Dinner to celebrate getting away from here: But not French food, she had said. I hate this country. This country where she is followed home after dark and told about her nice thighs and cock-sucking lips.

So you were walking back home, watching where the road bent, where the men’s voices were coming from behind the white pick-up. She had stopped and you had asked why, it’s fine, they are just out for a smoke.

Sometimes I think about how much I could do with my life if it weren’t for the fear of men, she said. And you looked at her, how she strutted with her head inclined slightly, her bag wedged beneath her arm.

But the good news, I got these sharp knitting needles in the mail, she said. I feel like I could defend myself, at least.

She pulled out the sharp knitting needles, but what will those do, what are those needles against the tall heads floating over the library shelves, the deep, frenetic lines carved into temples.

It is hard to say the exact moment. When you feel that you are safe and life is neatly structured the way it is supposed to be. Until a hovering eye that promises to take that crystalline structure and crush it in his solid fist. It would be a pleasure.

He had had his hand on the small of her back, and his eyes had been glowing, his lips splayed meanly, as he watched her swallow the drink he handed her. And she, she was so stupid for not seeing it. And you, you were so stupid for not saying.

And they were holding their drinks and their chairs were facing away, but how did they not see it? Don’t they know him, that he would be waiting? And you, you see it, so how could you not say—

The young man doubles over laughing as the train stops so the bottle of vodka and orange juice is rolling around at his feet. He is laughing because he can’t speak—“In your country—” he stumbles into the headrest, “In your country—do people carry umbrellas when there is only little rain?”

The train is climbing up the hill and if only you knew. You would start climbing down to the last car, down to the hollow, and never go into the hills again.

But you don’t. And now each day he will follow.

Every morning when it is windy and dark, you two stagger across the dock bridge.

I have this thing called the “fish face,” she says, as you pass by the men in tall rubber boots who sort through the mollusk shells.

See, I used to think that if I looked mean, men wouldn’t bother me, but the other day I was walking through the station, and this guy says, “Hey, girl, why you look so mean? I’m gonna make you nice.”

He would crumple your face. He would. You could never be frightening.

And what would be better, then? To be invisible? To walk so softly your feet don’t clack on the tiles? To sit away from doorways? To take other stairs?

And so he will look sick as he walks down the stairs. He will always look sick, until he finds you again.

This is not admiration.

I am your obsession, but I am nothing to you.

You are gone now. And I am seeing you in the monsters in people’s eyes. 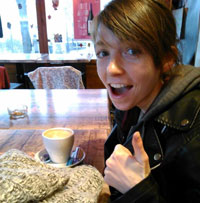 This is Kristen Herbert’s first publication. She lives in Chicago, where she works as a barista by day and writer by night. She’s traveled some and lived in France for a while, which she likes to include in her works. She is very excited to be a part of this issue of Cleaver Magazine.