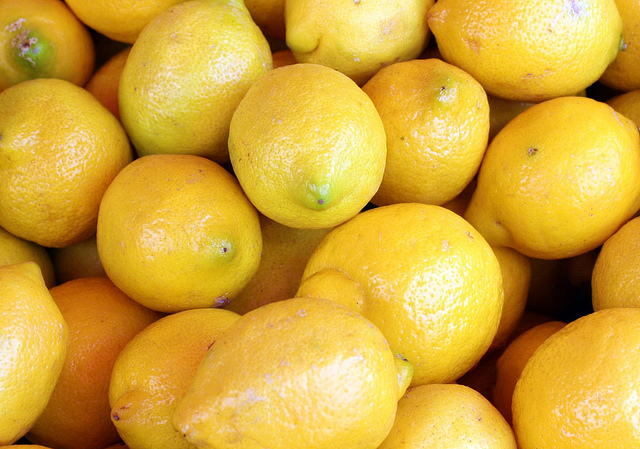 It was Lemon Tuesday and so far it had not lived up to expectations. His gran had made pancakes, smaller and fatter than any his mum ever made, and while he was eating, his mum had come home and talked quietly on her mobile in the hall, before coming into the kitchen and speaking to his gran using words he didn’t understand. He fiddled with the metal ball chain around his neck and felt the four corners of the cross with the tips of his fingers, before thumbing the raised ridge of Christ’s body. He knew that if he asked what they were talking about she would say in her most serious tone that it was an adult conversation, so he continued to cut perfect isosceles triangles out of his pancakes and decided that when he was a grown-up he would remember what it was like to be a child.

It was Lemon Tuesday because he had a plastic lemon in the fridge, which he squeezed on the pancakes his mum always made. He had called it that since he was little, and when he started school, the other days of the week began to take on different colours:

The boy finished his last triangle and tried to listen in on their conversation. He knew that his grandad was ill because he had stopped smoking and they had been to see him in hospital every other evening for the past three weeks, even though he was usually asleep when they got there. The lights were too bright in the ward and the grey-green plastic furniture made the boy feel unwell, but he usually didn’t say anything and would just hold his hands behind his back and look at the swirls in the tiled floor.

That evening he didn’t have to go to the hospital because he was going to Steven’s house. He knew that his mum didn’t like Steven’s mum because she always wore bright lipstick, but he liked going round there because he could play on the Nintendo Wii. His mum said that he could go, as soon as he had washed up and said goodbye to Gran.

At the sink he noticed his shoelaces were undone. The boy was one of the last in his class to learn how to tie his laces. He hated wearing velcro shoes because they made him feel like a little kid and his feet were too narrow so he could never get them tight enough. He bent down to tie his laces and remembered what his grandad had told him, talking himself through it as he went: left over right, tuck, pull, back together, loop right, left over, tuck, loop left, tuck and pull tight. He remembered his grandad’s hard, wrinkled skin and the way his hands had magically looped the first time he had shown him. His grandad had told him that he couldn’t tie his own laces until he was nine and had said: “Everyone in their own time”. He went to say goodbye to Gran and she finished off his laces for him. She gave him a little smile and he couldn’t tell if she was about to cry or not because her eyes often looked as if they had too much liquid in them.

He left the house, got on his BMX, and turned out of the estate, past the sharp bend in the road, which led across a bridge and up the hill. He tried to think of nothing but he kept seeing the words his mum had said. They were all black and in capital letters:

They hung over him as he pedalled up the hill. At night-time, the area beyond the bridge was flat blackness, but in the daytime there were fields, electricity pylons and a farm with chickens in the yard. He wasn’t allowed on the roads yet so he joined the footpath which ran through some fields, alongside the busy road. There were some bike tracks in the mud already so he didn’t feel too guilty about cycling on the farmer’s land. It began to rain and soon it was so heavy it was as though his glasses had grey filters in them.

The ground was uneven but it seemed to level out as the hollows filled up with rain. His anorak was wet to his skin like a shower curtain clinging to his arm, which was one of his most hated feelings. He was cycling up the hill against the wind when he spotted the strange bundle on the road—a blurred grey blob 200 meters ahead. It started to become clearer as he pedalled on and he thought it could have been a rat, or a big furry slipper. The rain pelted down on his face and he kept pedalling until he got to the fence. He jumped off his bike and was about to lift it over the stile when he saw through the fence that the lump of grey fur was a squirrel. He climbed onto the bottom rung and peered over. Although the squirrel was mostly grey, its coat had specks of auburn that perfectly matched his own hair and its dull black eyes looked like they should have been intense.

He knew the squirrel was injured but he couldn’t see any blood. He dropped his bike and hopped over the fence. He looked down at the creature and the damp soil soaked into the boy’s trousers as the rain got heavier; the huge raindrops felt like coins hitting the back of his head. He looked both ways and couldn’t see any traffic in either direction. The boy hadn’t seen any cars since he’d left the house but he knew one would probably come past soon. He stamped his foot right next to its head and shouted:

Just over nine miles away, the man’s arm came down to rest. The cannula around his head had irritated his skin for hours and he had been trying to make himself comfortable by readjusting it, moving his pillows and then altering the angle of his bed. Still not comfortable, at least he could now see the TV without straining his neck. The humourless TV presenter was introducing a piece on obese pets and was stroking a particularly mournful Basset Hound that weighed six-and-a-half stones. The man would have gladly watched the programme for the rest of the evening if he didn’t have to be seen by them all later, if he didn’t have to repeat the doctor’s words for the third or fourth time, if he didn’t have to listen to their endless interpretations and look at their poor, loving eyes. If he didn’t have to look at that boy.

With the cross now in his fist, the boy jumped and landed with both feet this time, shouting over and over again. As he screamed and thudded he thought of what his mum would have seen if she had stood watching from afar: a funny little boy shouting and screaming over nothing. Staring at the squirrel’s dull eye, he screamed and shouted and thudded and clapped his hands to scare it off the road. It gave the faintest twitch then remained completely still. He thought about picking it up but he knew that you weren’t supposed to move people if they had been in accidents because it could hurt them even more and decided it must be the same for animals. He also thought there could be insects in its hair that would bite his skin. He was ashamed of that thought and decided that it would be best not to touch the squirrel because it would hurt it to move it. There in the rain he stood staring, shouting at the ground and to the sky until his clothes were soaked through. The squirrel did not move, did not blink. He lay the cross down in the mud next to the creature’s head.

When the boy had shouted out everything he had, he whispered “I’m sorry,” grabbed his bike from over the fence and pedalled hard and angrily away, filled with rage for God’s forgotten few.
Image credit: Troy Tolley on Flickr 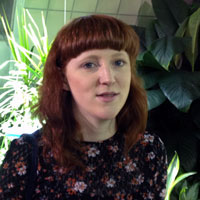 Jo Beckett-King edits Oblong, a flash fiction zine based in London. She works as a French translator and is currently enjoying an extended trip to the US. Her fiction has appeared in The Metric, 4’33” Magazine, Scissors and Spackle, and elsewhere.