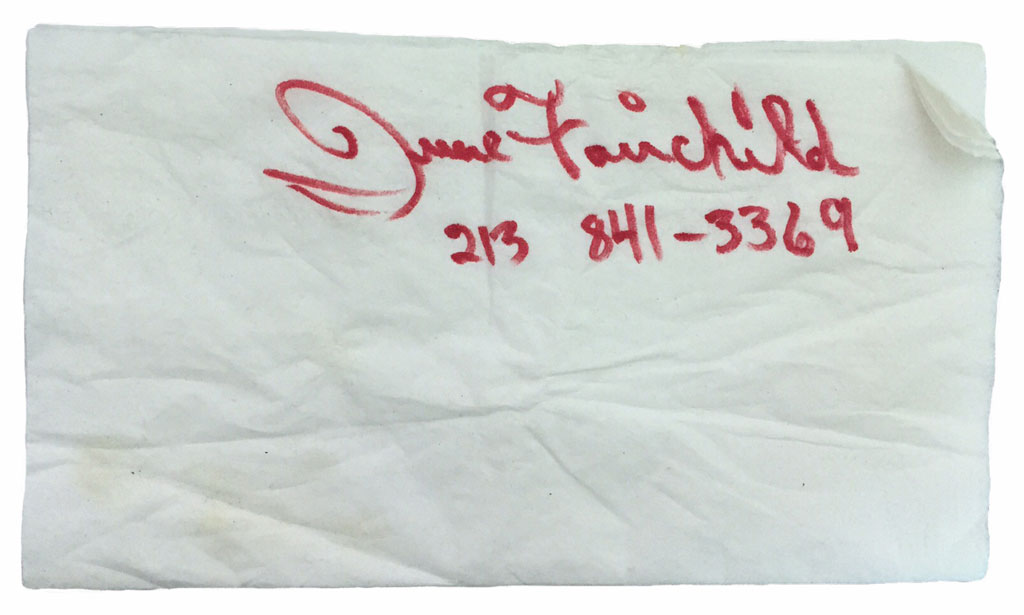 she’s planning a comeback.
she’s snorting Ajax for the camera.
she’s landing a role on “I Spy.”
she’s writing her number on a napkin and
handing it to me at King Eddy’s Saloon.

June Fairchild isn’t dead
I saw her tying one on at King Eddy’s Saloon.
she’s making “Drive, He Said,” with Jack Nicholson.
she’s selling the Daily News in front of the courthouse.
she’s snorting Ajax for the camera.

June Fairchild isn’t dead
she’s living at the Roslyn SRO on Main.
she’s giving up her daughter to her ex.
she’s snorting Ajax for the camera.
she’s planning a comeback, needs new headshots.

June Fairchild isn’t dead
she’s Up In Smoke, getting clean.
she’s sitting by the phone.
she’s falling asleep in Laurel Canyon with a lit cigarette in her hand,
waiting for me to call.

Former Gazarri’s dancer/starlet June Fairchild, a self-proclaimed “angel in a snake pit,” died of liver cancer on Feb. 17, 2015. She was 68 years old. Alexis Rhone Fancher writes, “I really did meet June and she wrote her number on the napkin. I’m a professional photographer. She had seen samples of my work and asked me to photograph her. Sadly, she passed away before we could get together.” 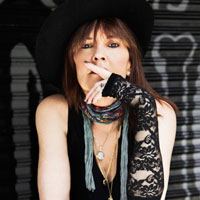 Alexis Rhone Fancher’s poem “when I turned fourteen, my mother’s sister took me to lunch and said:” was chosen by Edward Hirsch for inclusion in The Best American Poetry of 2016. She is the author of How I Lost My Virginity To Michael Cohen and other heart stab poems (Sybaritic Press, 2014) and State of Grace: The Joshua Elegies (KYSO Flash Press, 2015). Find her poems in Rattle, The MacGuffin, Menacing Hedge, Blotterature, Slipstream, Wide Awake: Poets of Los Angeles, Chiron Review, Hobart, and elsewhere. Alexis is the poetry editor of Cultural Weekly. Find her at alexisrhonefancher.com