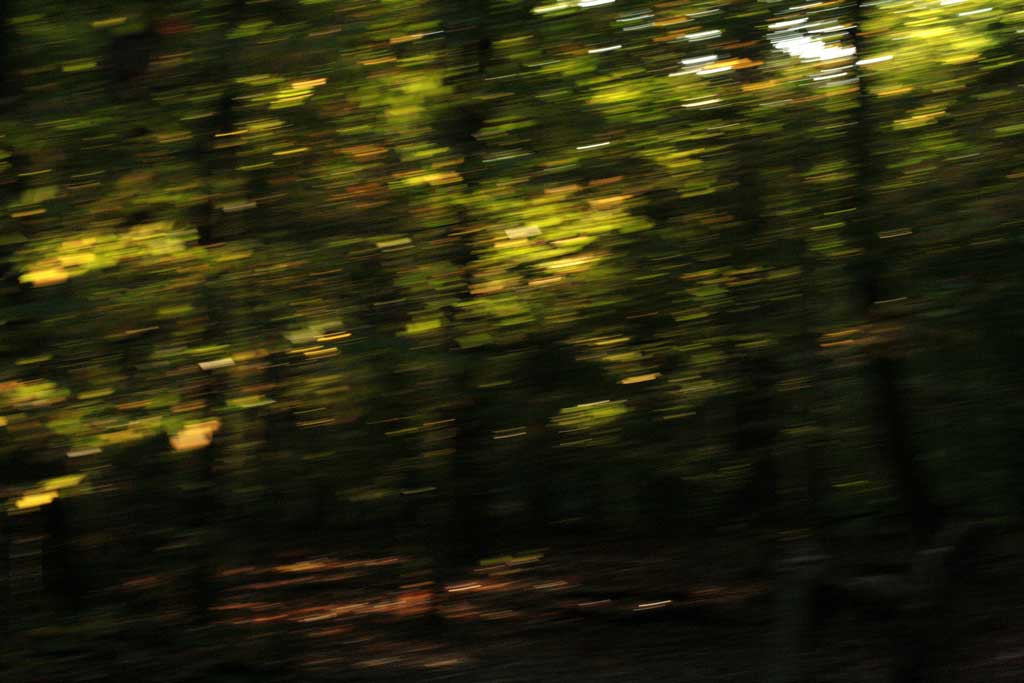 HOW TO JUMP FROM A MOVING CAR
by Ted Lardner

It’s all about thresholds.
When I walked up Shirley Creek trail
I knew some of my friends
to have done some wrong things right.
Blowing up gaslights
on suburban cul-de-sacs
with M-80s is not, once you
have the idea, difficult.
Jamming the gear shift,
both hands into Park,
and hugging your arms very tightly
around you as you throw
your body out the door, once
you have the intention,
is not any more difficult
than hugging something special good-bye.
When they jumped, they pulled out
all the air behind them.
Are you being held hostage?
Is your life under immediate threat?
Look for a soft spot.
Above the wedding ceremony
we watched one day a performance
by expert jumpers.
The car they jumped out of
sounded like an airplane,
and their jumps, so ecstatic,
do you think? Or accomplished?
They turned into smoke,
they turned into trails, they wrote out vows
the wind erased, we saw wreaths
of chrysanthemums over bannisters
falling over the gilded meadow
as you, looking up, momentarily
beside yourself, beside
the glass-sharp blade of the creek
where it hums its work on the pavement
beneath you, let’s face it, you
probably already know how.
Let’s go inside. This is hard.
It’s about thresholds.
The second-easiest thing,
after being born, you’ll do
in this world. There might be
a time it will be less dangerous
than to remain in the car.
Are you married?
When I walked up Shirley Creek trail,
the woods were so dry.
Dog shit tied up in throw-away bags
on the sides of the path.
Sky through the trees a really big car.
The jump is most of you, like DNA.
Grafitti—Christ! 55 years old!
How to spell it? Two Fs! One T!—
cut into the bark of a stupefied tree,
an aspen jumping across Shirley Creek trail,
that I jump as I read:
LAMAS… ISA… TILLEY… LENA
This tree will be here a thousand years,
where will you be?
My feet, step by step,
pass the afternoon beneath them.
This was where Li in city shoes
skidded into bushes and,
feathers, this is where, Edgar said, a feather
is a prayer, so you can’t just leave them,
all the ones you’ve taken,
you have to put them back.
This is where I thought,
when these woods go up,
they’re going to burn
like a motherfucker, where
cinders will rain, terrible American cars,
the fire jumping out their doors.
When I walked up Shirley Creek trail
I saw on the sky—all H’s, capital A’s,
And I, I, I, letters forming, and
I thought here of Rashida M.,
in this stand of huge trees, Rashida,
editor of the college newspaper
back home, this summer, she’s going
to Jerusalem, and here, where I
thought of her, and said out loud
I hope you come back, I read
on the exposed trunk
of a whitened old spruce
shorn to its last threads of bark,
where ants and termites
had tunneled, the hieratic
paths of their urges, zodiacal subway
route maps such as in Greenwich Village,
a place I have never been
that might as well
for all I can say about it
be in Europe.
A bear? Something like that.
Startled up ahead, crashing
the poison oak. I was about
to turn around anyway, the canyon
filling with sound. Hikers, bellowing
its mall-like reaches. Hello, help.
Wind. A ruckus of fire.
A trouble in the creek. 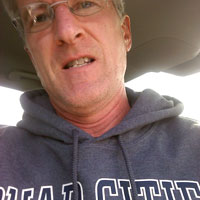 Ted Lardner has published three chapbooks: Passing By a Home Place (Leaping Mountain, 1987), Tornado (Kent State, 2004), and We Practice For It, which was selected by Mark Doty as the winner of the Sunken Garden Poetry Award and published by Tupelo Press in 2014. His poems and nonfiction have appeared in Watershed Review, One, Blue Fifth Review, Gone Lawn, 5am, Arsenic Lobster, and other journals. He lives and teaches writing in Ohio.