IN HEAVEN
by Rachel B. Glaser

they could have lived in clouds
but so missed houses that they actually built some
they missed roads
though in life, roads hadn’t really appealed to them

in a nostalgic, industrious phase
they assembled a touristy street
where stores sold the bright t-shirts of before
covered with puns and jokes about being half-alive 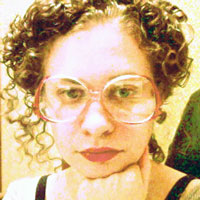 Rachel B. Glaser is the author of the poetry collection Moods (Factory Hollow Press, 2013) and the story collection Pee On Water (Publishing Genius Press, 2010). She paints basketball players and lives in Northampton, MA.