BIRTHPLACE OF A NATION
by Kevin Varrone

Joe TIVO-ed Casablanca
and became immune to commas.
Joe’s been paralyzed by the syntax of youth,
by his sumo for frankfurters.

Joe is a concave bibliographer, a nor’easter
cult diva who uses tabula rasa
as an ultimatum and asks
“Where you at?”

Joe loves women. Joe loves a woman
the way two broken machines
love each other in a landfill. 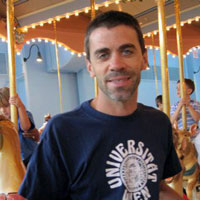