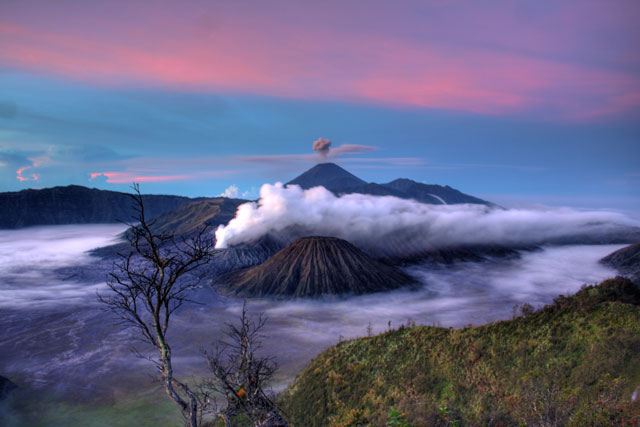 We were speaking about the earthquake.
Some were in high school then, others on a farm,
one driving, a few forgot.
A big tv swung from a classroom wall.
Waves in the tulip fields, yellow and magenta,
we followed the trough and crest as one of us
rolled his hand above a plate of corn.
We have no tornados or hurricanes.
A blizzard’s an insult.
We have floods and fill sandbags—
for earthquakes, drills.
Warned of tsunami, we alone are ready.
I asked if I might tell my dream
and began before objections,
though someone groaned.
“It’s short, nothing happens,” I reassured
and swept my hands with speed to show the cloud
arose in mist above church spires,
Crusaders’ lances on the march.
I saw the mountain peaks revolve about the city
where an insect in a helmet
raised a puff of motorcycle exhaust.
It oozed to a stately cloud
genied from the shining spout of a cylinder
a rich purple—the whole contraption like a zeppelin,
it spun toward me, lonely soul on the dusty path.
Swift across summer air it swam, cloud in tow.
I turned to run back down the mountain,
but felt its metal heat, and I woke up,
and everyone laughed—because we wake
before danger kills us, or it really was
that dream where nothing happens,
or has the mumbling eccentric at the end of the table
finally shut up? And all through dessert
I couldn’t say another word. 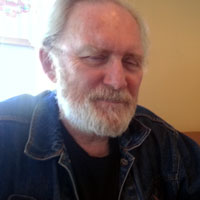 Michael Daley, born and raised in Dorchester, Massachusetts, took vows and prepared for the priesthood. Upon leaving religious life at 21, he was wild in the streets, protesting wars and seeking a life of experience. His work has appeared in APR, Hudson Review, Seattle Review, North American Review, and Writers Almanac, as well as current or recent issues of Rhino, Gargoyle, Spillway and elsewhere. His books include The Straits, To Curve, Moonlight in the Redemptive Forest, and a recent translation of Alter Mundus by Lucia Gazzino.