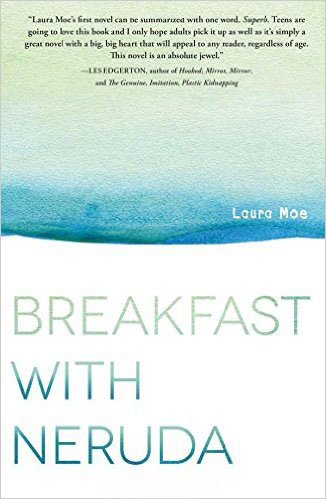 At some point in our lives, many of us bury parts of ourselves that we aren’t ready to face. These layers can form over time; from people we’ve encountered, from situations we’ve endured, or from issues we’ve found lodged deep within our psyche. They can protect us, like a shield, from life’s many fluctuations, and they can contribute to a great part of who we are. However, this protection can come at a cost–we can become distant, untouchable, and unreachable to those we love or resist the change we need to grow. In Laura Moe’s debut novel, Breakfast with Neruda, we journey with Michael Flynn as he learns to peel back the layers that have shielded him for so long.

We first meet Michael spending the summer cleaning his school, which serves as the first part of his two-part sentence after detonating his locker in an ill-conceived attempt to destroy his ex-best-friend’s car. Through Moe’s simple, yet, descriptive, writing, we soon realize that being condemned to custodial work and having to repeat his senior year are the least of Michael’s worries.

I go out to my car and count the cash I palmed from locker cleanup…I now have almost twenty-three bucks to last me for the next five days until pay day. If I plan this right I can get some gas, have enough cash left for a drive-thru lunch, and buy a few groceries.

Michael Flynn is homeless, having had to resort to living in his 1982 Ford LTD station wagon, The Blue Whale, because his mother’s hoarding has made his house unlivable. Michael’s journey of self-discovery begins once he meets Shelly Miller, another student sentenced to summer cleanup and the only person able to figure out where he’s living; a secret that no one outside of his family knows about. They both meet nearly every day, as the title implies, over breakfast, Shelly’s treat. What ensues is a relationship that forces Michael to look inward, uncovering who he is underneath all of his secrets.

Michael, of course, begins to fall for Shelly, but isn’t ready to open up to her. Shelly, he learns, isn’t quick to reveal things about herself either. The words they share between them, their sharp quips and comedic musings, are used to hide parts of themselves. They dance around their truths, choosing words carefully so as not to disclose too much. Their stories unfold piece by piece, each layer falling away as they learn to trust one another. A crashing of a family reunion unveils Michael’s hurt over not knowing his father. Their drive to Columbus exposes Shelly’s desire to be loved unconditionally.

However, it’s their love of words that brings them ever closer. Upon finding a book of Pablo Neruda’s selected love poems, they begin to connect on a deeper level. Neruda’s poems become the force that binds them, his words giving life and meaning to their budding love. Slowly, Michael begins to entrust Shelly with the parts of himself he felt necessary to hide and his honesty eventually coaxes Shelly into telling him her troubled past.

I want what I love to continue to live,/and you whom I love and sang above everything else/ to continue to flourish, full flowered…” (Pablo Neruda, Sonnet 89)

While Michael opens himself up to Shelly, he finds it hard to get his mother to tell him anything about his father. He knows that, somewhere beneath the detritus in his house, is the truth his mother kept from him all his life. The mounds of filth plaguing the house represent both Michael’s and his mother’s buried secrets. It’s when Michael finally becomes brave enough to sift through those piles of garbage that he’s able to discover who he really is underneath those layers of trash, and underneath the layers he made for himself.

Moe gives us a wonderfully written, character-driven novel. Her first love is poetry, which comes as no surprise since the narrative reads like one of Pablo Neruda’s poems. Every word feels as if it was carefully chosen to tell Michael’s story, using simple and crisp prose to convey deep and complex themes. Imagery is used only when it needs to be and actions are described as they are. Like a poet, Michael is fully aware of his emotions, and his feelings toward different aspects of his life are presented with such vivid imagery and language that a few choice lines become poetry in and of themselves.

I want to know her fully, to step inside her skin and burrow around. Like a hunter who waits for the fawn to become comfortable enough to let down her guard, I will wait.

Like Michael, I, too, am at a point in my life where I have to peel back my own layers. One of the best things about this book is that I was able to see myself in its characters and, through them, gain insight into my own troubles. This, I believe, is the mark of a great book–one that serves as a lens through which readers can look at themselves.

Breakfast with Neruda is a true journey of the self, taking us deeper with every turn of the page. It shows us that healing can only take place once we dismantle the walls we painstakingly build around ourselves and that our most vulnerable selves might hide our strongest truths.