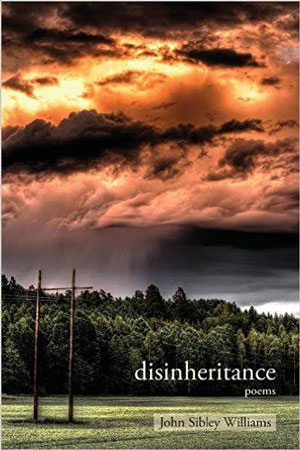 Language is almost intuitively understood as a tool for possession—a form of communication which allow us to hold and deliver ideas between minds. However, John Sibley Williams’s latest poetry collection, Disinheritance, demonstrates how language itself is anything but concrete or possessable. By employing themes of abstraction, fictionalization, and absence, Disinheritance depicts a reality that is only accessible through distortion.

Williams’ poems hone in on the moments where language breaks off, proves insufficient, or only serves to describe a situation rather than explain it. In this way, Disinheritance investigates how poetry can both be made out of language and escape it. Like a snake eating itself, Williams’ lines often turn back on themselves, admitting that their bodies are made out of English while also refusing to be limited by the borders of their syllables.

One of the first poems in this collection, “November Country,” uses a sense of abandonment to raise questions about presence and absence that much of the collection concentrates on. In “November Country,” instead of helping his grandfather dig a grave, the speaker decides to gather the earth rather than empty it, declaring,

I ball the half-frozen river’s slack
numb around my fist, tighten
into ice. I will try to be less
hard next time.

While the grandfather prepares for inevitable absence on the edge of a season, the speaker tries to possess something but comes upon his own emptiness—a numbness caused by the act of attempting to hold on. He goes on to attach himself to the migrating birds that are leaving him, but ends up realizing:

Even the birds
we compare ourselves to

With the use of this isolated final line, the speaker shows us his loneliness, feeling almost without a self as the birds leave him with nothing else but himself. The birds’ leaving is equivalent to the speaker standing still, his hands numb. The two actions become both opposites and synonyms, just as the holding of cold snow is both a way of having and losing feeling at the same time. 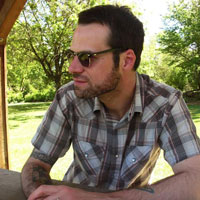 As metaphor worked to create the odd and oxymoronic idea of loss having presence in “November Country,” Williams uses metaphor in the poem “In Apology” as a route to realism. The poem opens with a candid explanation that the speaker has to use metaphor if he’s going to be able to realistically depict his fears. Here, the fiction inherent in making comparisons is used not to deaden but to heighten what’s real for this poem, writer, and speaker. The speaker explains that “there comes a time / abstractions must choose which shape to take,” perhaps admitting that all metaphors betray a body behind them; that despite the undeniable distance between words and their meanings, things like fear can be called “golden threads woven into a bundle” and still lead a braided way back to someone’s racing heart.

Because so much of Disinheritance walks directly through language and abstraction in order to arrive at its own breed of realism, concepts like that of a “self” also depart from their descriptions and bodies to show we are all constantly both made up of and in the middle of making ourselves. “A Dead Boy Learns Metaphor” discusses “The comfort of abstraction / of self-defining,” linking how we understand directly with how we intentionally misinterpret our realities. The speaker goes on to commit further intentional misinterpretations:

can finally be their pure spring lake.

It’s through a misdirection, a very purposeful decision to see walls as birds, that the speaker is able to realize and comprehend himself inside them. He is only a lake when the walls have feathers and he is only fully himself when he can serve the birds he’s imagining. This is exactly how abstraction can be utilized as a way of defining and making clearer—giving wings to white bricks allows this patient to understand who he is as a person standing within them.

As reality becomes fictionalized in its translation from sensation to poem, so too does Disinheritance admit that language is anything but static or uniform. In “House Fire,”

and what the gull sees is not
………what the Haida saw, is not what I see

Perspective becomes a way of moving words across definitions without necessarily admitting that any one type of sight is right or wrong. The birds in this poem see their world differently than the speaker and Williams writes this down differently than it will be read. With the admission that language is naturally fluid comes the idea that even a poem written with ink and built out of comprehensible words cannot wholly solidify an experience. The water and the movement and the loss Williams has offered throughout Disinheritance suddenly become both what his language is communicating as well as what it is made out of. It is impossible to hold it all still: Williams’s reoccurring theme of absence as a presence, his resurfacing image of a dead boy acting as living, and the rivers that reappear throughout this collection connect it with a current—all of these things give constant movement to his words and allows each poem to be read in many more ways than one. Like its written rivers, the poems of Disinheritance are chilly, dappled with careful light, and anything but still.