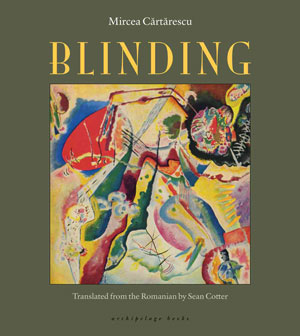 It starts in adolescence. The questions come to you while lying in bed (certainly now with a growing awareness of your sexuality), the walls of your room expanding into endless grainy darkness, as if the room itself could encompass the entire world: why am I here, why is there anything at all?

The questions may haunt you at age 13 or 15 or 17, but by adulthood they tend to feel banal. Unanswerable, impossible, if taken seriously debilitating, they are in a word blinding, and so you tend to avert your gaze. But suppose you can’t, suppose the inviolable white light only draws you closer, to madness possibly, to paint or write or drink or pray (to what God, tell me?) almost certainly. And so perhaps you scribble, the pages of your notebooks filling with furious script, like eons of sediment piling into sad mute mountains no one else will ever excavate or carve or climb.

Unless, perhaps, you are a writer of the caliber of Mircea Cărtărescu, the celebrated Romanian author of the 1996 book Blinding: The West Wing. Cărtărescu is a poet, essayist, and novelist of unsurpassing imaginative vision and startling bravery. He has won several Romanian literary prizes, but beyond Romania and France, where a few of his novels have been translated, and Holland, where he has taught, Cărtărescu, a child of the post-War communist dictatorship of Nicolae Ceaușescu, is rather unknown. His only other novel to be out in an English edition is the 1993 Nostalgia, published here in 2005 by New Directions.

Blinding, which was brilliantly translated into the English by Sean Cotter for Archipelago Books, is a strange, beseeching, glimmering book that’s part meditation, part meta-fiction, part exploration of the relationship between a man and his deeply flawed city. The Bucharest in Blinding, says the book’s narrator Mircea, “filled my window, pouring inside and reaching into my body and my mind so deeply that even as a young man I imagined that I was a mélange of flesh, stone, cephalo-spinal fluid, I-beams and urine, supported by vertebra and concrete posts, animated by statues and obsessions, and digested through intestines and steam pipes, which made me and the city a single being.”

And like the Prague of Michal Ajvaz and the Buenos Aires of Borges, in Cărtărescu’s hand the rooms, gazes, corners, lamps, current events, political officials, ruins, hallways, and basements of Bucharest become portals to hidden, dreamlike, distorted, and yet visceral worlds. Reader, beware: one might veer into them at any second.

The point of these journeys, be they to underground vaults or high into elevator shafts left standing after wartime bombing or even to the time sequence of another city—New Orleans—is to challenge the veracity of our individual senses. We are, in other words, he says, blinded by the incessant propaganda of our own prosaic lives. But there is hope: even “in this opaque world, dense, murderous as pillow that someone holds over your face, kneeling mercilessly on your chest to stop your writhing,” says Cărtărescu, “revelation is possible.”

He goes on: “What every person had intuited at some point in their lives somehow, suddenly became clear: that reality is just a particular case of unreality, that we all are, however concrete we may feel, only the fiction of some other world, a world that creates and encompasses us.”  In that world, we—every being and kind of being, every feces and every sperm, larvae, neuron, and whisper—are all part of single throbbing unit of life.

The heart of the book is this search for enlightenment, with hints of the Norwegian writer Karl O. Knausgaard’s discovery of angels in A Time for Everything and shades of Hinduism and barbarity. Is this a true spiritual journey or, as Mircea wonders, “nothing other than howling, yellow, blinding, apocalyptic howling?” This meta-conversation about the purpose and intent of the work—alive throughout—is like a strap handle on a streetcar, to steady the reader as the story sways.

And what of the story? Having gone through electric shock therapy for facial paralysis at 16 and hospitalization for another, unspecified, illness as a young boy, Mircea is about thirty in the mid-1980s, when the book takes place. Seemingly alone but for a drunk named Herman he’s taken into his small apartment, Mircea seeks the meaning of his existence, most profoundly, in the empathetic narrative of his mother Maria’s coming of age, from peasant village to encounters with Bucharest nightlife to the night of the bombing, by Allied forces, of her neighborhood in the last year of World War II. Maria is adventuresome, self-possessed, and in love with cinema. Post-War Bucharest, the “Romanian miracle” of early communism, feeds the life of her quickly transforming city. But progressivism turns into the despotism, doubletalk, and political strangulation of Nicolae Ceaușescu’s bloody regime: a different kind of blinding.

Through all of it—the quick paced, straightforward, sexually charged narrative of Maria’s passage to womanhood, her marrying Mircea’s father Costel, Mircea’s boyhood from one house to the next with visits to Maria’s father in the country, the detours to other worlds rife as they are with insect imagery and madness, the strap handles of meta-fiction—Cărtărescu’s prose, so magically transformed into English by Cotter, speaks to the reader with a lush and fruitful honesty. Time and again, he produces imagery you, the reader, are sure you’ve held in the quiet of your own subconscious, mirrored in Maria and Mircea’s own search for memories and images of their pasts. Here is a crowded subway station filled with “a subterranean humanity rising like a menacing water,” a blind man walking “as though he was resisting someone who pushed him from behind,” a tram approaching, “red, rocking on its rails, like a tired beetle,” Mircea walking the night city, “the mysterious and beloved city spread under the Persian carpet of the constellations.”

In all, Blinding wants to prove that being is both less and more than we take it to be. It’s less, because of course, none of us is really separate from the massive opera of life, more because reality is also unreality, reality is memory, human existence is cumulative, iterative, self-creating. “The me of today,” writes Cărtărescu, “englobes the me of yesterday who encompasses the one from the day before yesterday and so on and so on, until I am only an immense line of Russian dolls buried one in the next, each one pregnant with its predecessor, but still being born from it, emanating from it like a halo until the middle is darker and the surfaces more diaphanous, and the glassy surface of my body in this exact moment already reflects the tame light of the one that I will be in an hour, since my astral body is nothing else but the clairvoyant light from the future.”

Again and again, Blinding seeks this greater, more profound, more meditative path, which in this imaginative realm is never banal and always lush, even amidst the gray streets of the ugly city. That doesn’t mean the book is easy to read. The other worlds are harsh and strange and sometimes ridiculous. A giant, blue winged butterfly appears and reappears, a harbinger or a monster or a god. You might tire of Mircea’s endless melancholy or, if you’re like me, part flesh and stone of my city, but also weary of its utter, blinding hegemony, Cărtărescu will speak to you, an astonishing voice from another world.