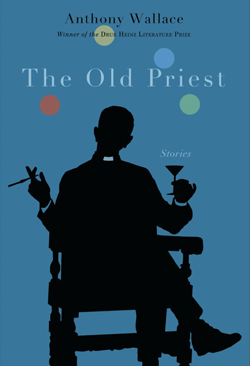 “Let’s leave Limit,” says Anna to her husband Phil, the narrator of Anthony Wallace’s story “Snow behind the door.” Limit is a fictional New Jersey town near Atlantic City and a metaphor for the physical and emotional borders that confine Phil and the other protagonists in this searing, surprising collection. Phil and Anna want to escape—their neighborhood is in decline, the neighbor’s dog won’t stop barking—but at what cost? To what end? What’s keeping them?

What’s begging them past the border?

Phil and Anna could leave. She suggests they open a restaurant in an old industrial town in upstate New York that’s “just begging for this kind of thing.” But Phil’s grandmother Rose is dying; they can’t leave her, not yet, anyway. He needs her too—as he listens to her own stories that wend the line between escape and acceptance. Ruth’s stories—and the stories, places, and myths that hover over other characters in this collection—exert a kind of invisible, perhaps even imagined, influence over their lives. We imprison ourselves, Wallace seems to say, in memory and habit.

In “The City of Gold,” fiftysomething Charlie has dragged his nineteen year old girlfriend Amber, the narrator of the story, from Atlantic City to New Mexico, where he imagines he’ll get work in an Indian casino. (The casinos in this book, windowless places of escape, inevitably imprison the characters in dead end lives. Phil works at a casino called the Bastille, “the irony of that name long since lost.”) Since she was sixteen, Charlie has kept Amber under his total control; he has given her a “good life” in exchange for her freedom. While they’re waiting to see Charlie’s contact at the casino, Amber sees an opportunity to flee; as with two other stories in the collection, “Have you seen this girl?” and “The unexamined life,” escape comes in the form of a surprising sexual encounter.

Here is the narrator Christine stepping across a threshold in “Have you seen this girl?”:

Then a door opens and I’m out on the fire escape with Darcy, the sky in flames behind the blackened rooftops. The dog on its length of rope blinks, looks up at me, blinks again.

“Hey,” Darcy says, and brushes the velvet-covered back of her hand against my arm, the side of my face, the ends of my hair.

“Hey,” I say back. “Want to go someplace? A look, something, the architecture of her face.

She takes her gloves off, one arm then the other.

Sex and drugs, indeed, infiltrate Wallace’s various borderlands; they serve as the means and form of escape, and, of course, entrapment. In the title story of the collection, “The Old Priest,” a 2013 Pushcart Prize winner suffused with existential Catholicism, an encounter traps the narrator in an endless paralyzing purgatory of sexual confusion and uncertainty. In some other imagined Catholic reality, the priest, behind the confession box, might relieve him the burden. But this priest, who knows the border territory all too well, and the narrator are locked in an unspoken battle of will and shame.

Wallace’s protagonists seem to alternate between paralysis and determination; his skill lies in meting out both kinds of characters—and in convincing the reader how closely they’re aligned, perhaps he might say two sides of the same coin.