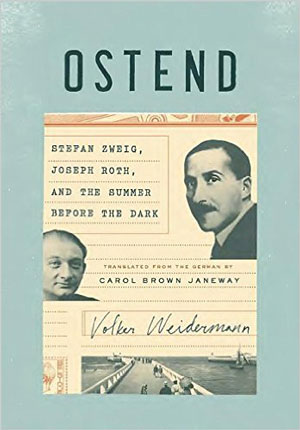 …it would be something, to my mind, if the museums would display not only the finished article but the preparatory studies, the sketches, the plans which preceded them, so that people did not regard the finished work as something which just dropped out of the sky, but instead realized that these masterpieces were created by their brothers, men just like them, created through great pain, with suffering, with joy, torn from the raw material of life at the highest price to the soul.

Volker Weidermann’s Ostend gives us the stories of writers Joseph Roth and Stefan Zweig, along with an ensemble of friends, coming for summer holiday to a favorite Belgian beach resort. The style is clipped and brief. History, dark fairy tale, friendship, fleeting joy, literary enchantment, dissipation, destruction, exile. Ostend reads as a time capsule that Weidermann has sorted through for us, and organized. It’s 1936, and the holiday begins like a David Hockney print, with an inviting surface of sea and sun and wide blue sky. But as we make our way through Weidermann’s collections of scenes from the period, the view looks more like something painted by James Ensor, the mask making, shell collecting, piano playing older artist who happens to live in a little house in Ostend. As we look behind the scenes at the act of literary creation we see the writer as an element of a complex artistic ecosystem. Ostend pushes us to think about the serious, long work necessary to heal an artistic ecosystem when racism has had a place inside it.

There is a lightness of tone that opens Ostend: “It’s summer up here by the sea; the gaily colored bathing huts glow in the sun. Stefan Zweig is sitting in a loggia on the fourth floor of a white house that faces onto the broad boulevard of Ostend, looking at the water. It’s one of his recurrent dreams, being here, writing, gazing out into the emptiness, into summer itself…” Weidermann captures the feeling of optimism, easy creativity, appreciation of one’s fellow artists, and the sweet potential of friendships, all known to the group that included Zweig and Roth before the War. Once upon a time, life was full of pleasures for them. Weidermann gives us that sense.

But ultimately it’s a dark vision. Weidermann manages to convey, in this compressed, swift historical tale, the liminal state of the Jewish writers in exile, their situation of not knowing how historical forces will shape them. While Weidermann shows us Roth drinking himself to death, he also raises the question of whether Roth has much control over what happens to him. History presses as hard on all the characters as do Roth’s excesses and his favored bottles of Verveine. Almost no one comes out of this superficially idyllic moment not shattered. 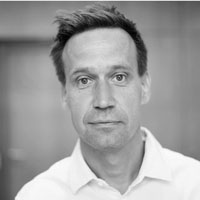 The book is not a novel, but it feels novelistic. Weidermann applies simple brush strokes: he quotes Joseph Roth, Stefan Zweig, Hermann Kesten, the deathbed fragment of Christiane Grautoff, the personal diary of Klauss Mann, and so on. He builds his story out of archival research, presenting his rich material in a compelling frame. He seems also to add some imagined dialogue to the story, so perhaps what we are reading is a pastiche of fiction and nonfiction. The small scale of Ostend allows Weidermann to focus on a carefully chosen moment that illuminates well beyond the frame. I wondered what might have happened if Weidermann had allowed himself more room to fictionalize and to build something larger around his core characters. Fiction might have allowed the writer to breathe still more life into his characters and to more fully realize the texture of their world. I wondered if by insisting on non-fiction, Weidermann felt the story would have moral weight.

Weidermann does little in the way of explicit editorializing. Yet he does a remarkable job in tapping into the theme he presents as Stefan Zweig’s obsession: guilt. How bound is Zweig to look after his friend? German publishers cast out their Jewish writers, and these writers aren’t assured of American or European houses staying with them. Life is bleak for Roth. Publishers are dropping him; he no longer has much hope of supporting himself. Zweig is somewhat better off. But as Weidermann presents it, Zweig “can’t do any more for Roth without being dragged under himself. Not now. He wants to be free.” Zweig as understood and portrayed by Weidermann is filled with a sense of responsibility for his friend but also a desire to pull away. Here is Weidermann on Zweig’s first (and it turns out only) novel: “The theme has always preoccupied him; now, in these years of exile, more than ever. Is a life without guilt possible?”

Weidermann guides his story to a devastating place. He tells us of Hermann Kesten, a writer connected with Roth and Zweig during their magical summer. After the War, he finds himself invited into a circle of young German writers known as Group 47. They turn around and reject him and other writers previously in exile. These German writers, including Hans Werner Richter, appear chillingly incapable of reaching out to the Jewish writers who lived through the Holocaust. In Weidermann’s portrayal, we find post War German writers as lacking compassion and guilt that we might expect them to have.

Weidermann’s Ostend is not a lecture, and historical forces are not the only source of suffering in his tale of Zweig and Roth. In the figure of Roth, whose drinking destroys him, we witness a toxic environment not as an abstraction. Roth, because he is a Jewish writer, begins to lose his ability to make a living as a writer; his publishers turn their backs on him. Roth becomes involved with a younger writer who adores him, but seems to be, like Roth, an alcoholic. What can Zweig do for his friend? Weidermann writes of Zweig and Roth greeting each other at Ostend: “And then everything is back to normal. Roth’s relief comes flooding back by the minute. A man, a friend who organizes things for him, his connection to the sun, to common sense, to the guarantee of a safe existence.” Of course, this “safe existence” is not possible. Roth’s personal difficulties have everything to do with what is happening in the world in which he became a writer. It is as though the Verveine that will kill him is poured from the atmosphere.

Note: The epigraph comes from a lecture collected in the recently published MESSAGES FROM A LOST WORLD: EUROPE ON THE BRINK by Stefan Zweig, translated from the German by Will Stone, foreword by John Gray, Pushkin Press, 216 pages