Nobody took Rhiannon there, and nobody took her home. She managed the whole thing by herself. When she woke up, it was dark outside. A light was on in the living room, and she could see it through the open doorway. She lay in bed with her eyes closed, trying to decide if it had really happened or if she had dreamed some version of it and it hadn’t happened yet. She hoped it had happened and that it was finally over, and at the same time she hoped it hadn’t yet happened, something that was still out there, a possibility among other possibilities. She lay quietly in the place between happening and not happening, between what had been and what might yet be.

In the doctor’s office she’d waited longer than she’d expected to. She read a couple of magazine articles. One piece was about ants finding their way home. If the ant’s legs were extended, the ant would go past its home: the ant would walk farther than it needed to. If the ant’s legs were shortened, it would stop before it reached its home. She couldn’t remember how they lengthened or shortened the ants’ legs in the experiments. To lengthen them they could attach tiny stilts, perhaps, but to shorten them—

Then there was another article about Portuguese men-o-war. They were a type of jellyfish. She remembered laughing at the idea that the plural of man-o-war is men-o-war. It seemed ridiculous to her, but she couldn’t figure out why. She pictured the school of jellyfish like a gang of men rocking back and forth even as they marched forward with cudgels in their hands. She laughed now, still with her eyes shut, thinking of it.

In a while she got out of bed and walked toward the living room. She was unsteady on her feet, but she was thirsty. She went from the living room to the kitchen and drank water out of the plastic gallon jug in the refrigerator. Only then did she realize she was still wearing her raincoat. She unbuttoned it. Underneath the raincoat she was wearing a long white t-shirt and below that a pair of striped blue stockings.

She shrugged the raincoat off at the shoulders and let it drop to the floor. On the counter was a canvas supermarket tote that contained a large bottle of Orangina, a bag of Ranch-flavored Doritos, and a fresh copy of People magazine. She took the things out of the tote and lined them up on the countertop. In the sink was a dish partially covered in water, and on top of the dish an empty drinking glass. A long strand of blond hair lay across the wet plate. She dumped some of the Doritos into a terra cotta salad bowl her mother had given her, poured warm Orangina into the glass that had been in the sink, and placed the bowl and the glass along with the magazine on a wooden bed tray. She took the tray back into the bedroom where she lay quietly, enjoying the snack and watching the six o’clock news with the sound turned off.

She still didn’t know if it had happened or if it was still in the future, something that was going to happen but which hadn’t happened yet. She might have been in the doctor’s office just to schedule the appointment and have a preliminary checkup. She might have a card in the pocket of her raincoat or in her wallet that gave the date and time of the procedure. It might still be out there, a possibility among others.

She changed the channel and another program silently appeared. The show in progress, she found out by scrolling the remote to the viewer’s guide, was a documentary called “The Witch of Hunan.” It was on the History Channel. But the program seemed to be almost over and she couldn’t figure out what it was about. The viewer’s guide had given the title but no description. On the screen was a small brown mummy, or what looked like a mummy, ceremoniously arranged in an open pit. Then there was some footage of a woman in an elaborate costume, a pointy black hat with arcane symbols on it, loose clothing that billowed up and undulated as the woman twirled round and round a roaring bonfire, a stick in her hand that looked like a magic wand. She recited something Rhiannon couldn’t hear and the people huddled by the fire sat listening, mesmerized. The woman in the pointy hat must be the Witch of Hunan.

Rhiannon took the remote from the night table and turned up the sound, a row of green dots moving across the bottom of the TV screen, but it was too late to hear what the witch had to say. The witch started screaming and waving her magic wand, the History Channel blared some fake-sounding Chinese music, and all the people fled as the bonfire seemed to engulf the screen. The credits began to roll over a final shot of the mummy in her burial pit: gourd-like shoes curled up at the toes; brown, leathery face pulled tight beneath the pointy black hat; swaddled in the witch’s loose-fitting robe a mummy so small it might have been a cat, a tiny blue cap on its head, a tiny blue stone over each tiny eye. 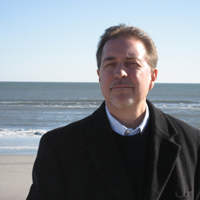 Anthony Wallace is a Senior Lecturer in the Arts and Sciences Writing Program at Boston University, where he is also Co-director of “Arts Now,” a curriculum-based initiative to support the arts at BU. Tony has published poetry and fiction in literary journals including CutBank, Another Chicago Magazine, the Atlanta Review, River Styx, Sou’wester, 5-Trope, the Republic of Letters, and Florida Review. His short story “The Old Priest” won a Pushcart Prize and was published last fall in Pushcart 2013. His short story collection The Old Priest is the winner of the 2013 Drue Heinz Literature Prize and was published in September by the University of Pittsburgh Press.