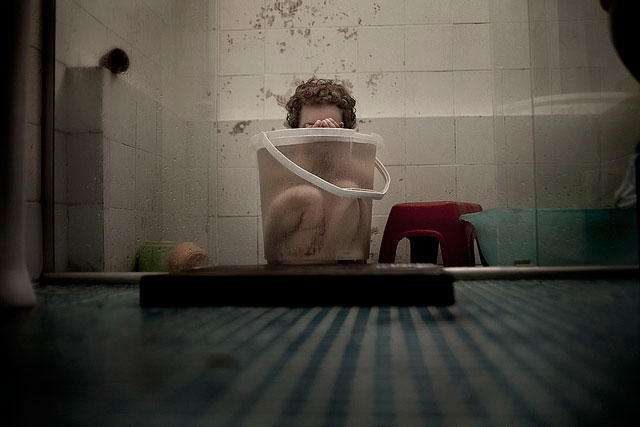 FLESH AND BLOOD
by Jamie Lin

He’d done it again. Little puddles of sticky green glop all over the floor, specked with shards from the small glass bottle that’d held the apple purée. His fist clutched the plastic spoon as more pale green glop dribbled off his chin and onto the high chair.

Ying had left him for less than a minute to attend to her dinner, which had been threatening to boil over onto the stove. When the bottle shattered on the tiled floor she moved quickly, striding across the small expanse from kitchenette to living room and lifting him clean off the chair and into his cradle, away from the glass. Her movements were smooth, instinctive. He gurgled, his expression untroubled, and using the spoon as a catapult he feebly flicked more purée onto the floor.

As she looked over the mess a familiar warmth began to collect in her insides, wisps of something that was not yet—this was the second time this week she had forgotten to sleeve the bottle and both times he had knocked it off the table. She picked her way carefully back to the kitchenette where the pot still rattled on the stove, the water hissing on the flame. This time she managed to get the clattering to ease before a new sound broke in the close air of the flat: a shrill wail, a sure sign that he was hungry again. At mealtimes she would struggle to feed him while he pushed food out of his mouth with his tongue or smeared it on his chair, and only as she was close to giving up would he grow hungry and shriek his insistence on being fed. She removed a fresh portion of purée from the fridge, placed it in a bottle and warmed that in a container of hot water. It was easier to prepare his meals in batches, steaming the fruit and vegetables—or boiling when she didn’t have time—and then puréeing by hand, storing the food in the freezer where it would be good for a couple of days.

The crying continued as she crossed to the living room and tried to right the mess with paper towels and a wet dishcloth. The impact of the bottle on the floor had flung bits of glass under the furniture and it would take too long to gather the pieces together; they would have to wait until after he was fed. He was rigid in his cradle where she had left him, barely a year old and bawling like only an infant could, the shrill sound seemingly one with rather than coming from him, shining into the hollows between her ears and the crevices of the small flat. Ying felt her teeth slowly go on edge.

When the last of the purée was off the floor she returned to the kitchenette. The broth simmered quietly, tendrils of steam uncoiling lazily upwards in the enclosed, stagnant air. A pigeon sat on the ledge just beyond the closed windows, its head cocked at an angle, by all appearances a permanent feature of the windowscape. As Ying dabbed some of the fresh purée on her tongue to see if it was ready, she heard the spoon clatter onto the floor and his wailing double in volume. There was something strange about the way he was howling: it was different, urgent somehow. Quickly she swirled the contents of the bottle to even the mixture out, and in four strides she was by his side. Bits of glass lay strewn around the high chair; his cradle would have to do. His face was pale from all the crying and his fists motioned uselessly in the air. She shushed him loudly, spooned some purée from the bottle and pushed it into his mouth. His lips hung open, non-complying, and the purée trickled out onto his chin. The cries continued. Ying clicked her tongue, the warmth in her insides close to blooming. He had to be hungry by now. She swirled the contents of the bottle again and took another taste before offering him a second spoonful. His eyes squeezed shut and he continued to wail. This time the purée dribbled onto the cradle bedding.

As if from a distance, Ying watched one hand pass the spoon to the other and arc cleanly back across his cheek in a fluid motion, connecting with a tight thwack. Her insides were alive and the expression felt uncommonly good. In response his cries crescendoed, his skin flowering a multi-petalled crimson where the back of her hand had landed. She tried again with another spoonful of purée, but this time his head jerked away so that she couldn’t even get it in his mouth. His vacant gaze was fixed intently on the windowsill upon which the pigeon still perched, patient. Buoyed by another surge of emotion, her hands left the bottle and the spoon and fell roughly about his shoulders, shaking him fiercely, her voice jagged in a half-scream, desperate for the wailing to stop.

His tiny weight shifted under her strength and out of the corner of her eye she glimpsed a squirming yellow-and-black spot on the beige of the bedding—a small wasp had been caught under his thigh and was just wriggling free. With the blood rushing to her head she lifted his leg a little and saw with a shock that the back of his thigh was puffy and discoloured. He was whimpering quietly now, and when he lifted his eyes to hers again, she saw a look on his face that had the quality of a realisation, as if her actions in those moments had upset something precious, something deeply personal that had barely begun to take shape. And while that was the last time he would taste her wrath as he shed his youth over slow decades, emerging a man no different from others in appearance—able-bodied, good-natured, kind, yet something seemed to have been taken from him that day that he was not to find again, some capacity to give all of himself over to another, a quality of abandon that made him seem more than, or perhaps not quite, flesh and blood. Decades later in the long afternoons she would spend awaiting his return from work, their roles by then wholly reversed, her mind would often return to the events of that day, her thoughts circling the past like a songbird over its cage, already but not yet free. 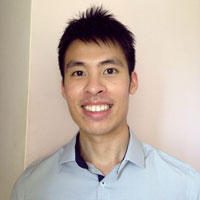 By grace alone, Jamie Lin lives, teaches, reads and writes in Singapore. His work can be found both in print and online in Flash Magazine (UK), Relief, and QLRS. A chapter in a nonfiction anthology Altogether Elsewhere is forthcoming from Math Paper Press in 2014.