IN MY TIME
by Shannon Viola

I have a love-hate relationship with Hemingway.

Sometimes when I’m writing, he’s over my shoulder. He seizes my hand and slashes the Latinate adjectives on my page while I wince and moan. He tugs at one of my curls every time I craft optimistic characters. When I really anger him, his hot fist squeezes my shoulder. Then he prods my side.

“What are you doing? Get at this.”

All I have to do is flutter my eyelashes at him, and he releases his grip. He always did have an Achilles heel for women. My youthful face, however, is useless when he sees that I have concocted an eighteen-word sentence. He grabs the entire mass of my hair so hard that my neck bends at an unholy angle. He holds my head below his.

He sees that tears totter in my eyes. Deleting lovely words is death to me. “But don’t you want an In Our Time?” he says.

I nod and sniff as he dabs my eyes with his smudged handkerchief.

Composed of short stories marked by vignettes, In Our Time by Ernest Hemingway was the catalyst for my writing. Before I read Hemingway’s little chapbook in Honors English III, I wrote elaborate pieces of short fiction: a little girl forgetting her name, best friends in the midst of adolescence, and an honors student who loves to bake. Although these stories filled up the pages nicely, the characters were spacey and the narrator removed, like snow the day after Christmas. They weren’t stories that I could see future high school students discussing; they were the kind of stories that would be published in some obtuse journal gathering dust in a public library.

While reading In Our Time, I savored every detail of Nick Adams’s life and dissected each deceptively random vignette. It was as if Hemingway was flirting with me: each detail was a come-hither wink, but he never lingered long enough for me to smile at him.

My witty banter with Hemingway began one day in English class. Mrs. Smith had “A Cape Cod Evening” by Edward Hopper on the projector. “Now”, she said, folding her jewel-studded fingers, “I want you to write what you think is happening in this painting, like a story. Five minutes!”

Graphite smoke streamed from my pencil tip, creating memories in characters that I had just met and their deepest desires and foibles but my character could only express them in terms of clean and dirty also don’t forget the dog and there are sailors out there, yes, that’s what she’s looking at, but what if-

I finally took a breath. I emerged from my imagination with a wonderful story, and it didn’t even fill the page! A reader could chip away at my glorious, faceted story for hours.

“This,” Mrs. Smith said, “is called the iceberg effect. Hemingway writes like this, like he’s writing from a painting . . .”

Here is when I love Hemingway: I love it when he’s peeking over my shoulder deleting details so that my stories are ekphrastic. My best work ignores character names and lets you fill in the gaps. He pats me on the back when I write like this; it’s the greatest gesture of love he can give.

After writing a la In Our Time for a couple of months, I noticed a theme. My heroines were girls dressed in white, with furrowed brows. At least one character berated this girl for her innate beauty, like she should hide it so that no one should feel ugly.

This is the core of my In Our Time, but Hemingway doesn’t really understand.

“There’re not that many pretty girls. Give her some freckles.” He takes a swig of rum.

“Freckles are supposed to be ugly?”

“Well, isn’t your little book all about being perfect?”

“It is not! It must be over your head if that’s what you think.”

“Please, this is all over your head.”

I stand, arms akimbo. “Beauty isn’t all moisturizer and hairpins. Do you know I have been mortified because kids tease me about what I wear? That I’ve been told I’m participating in the over-sexualization of women just by wearing an Ann Taylor dress? I’m no Bardot, but I know that first impressions actually do mean something, and I always make an effort. Is that vanity? You can’t make a pretty girl ugly with words; you can make her feel ugly, but that will never change the fact. But my book isn’t for the beautiful people. It’s for the people who think that they can please every minority, for those who believe in cultural relativism, and for the atheists who don’t know that Aristotle already proved the existence of God with logic. Those people can’t make the majority a minority, and they certainly can’t tell me not to wear lip gloss to school.”

Hemingway leans back on his heels. “You’re so cute when you get passionate about these things.”

“I hate you right now,” I say, dismissing him with an eye roll.

We’re quiet for a moment, and I sit again. I write: “The hem of her dress flew as her knees popped up and down, revealing her sun-seeped thighs . . .” and his nostrils flare. His hand rises to slap my cheek, but I intercept it. 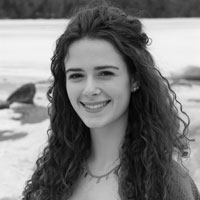 Shannon Viola has been published in the 2006 edition of Anthology of Short Stories by Young Americans, Teen Ink, and Calliope, and she recently won the 2013 Mayborn National History Writing Contest. Shannon has attended the New England Young Writers Conference at Bread Loaf, and she runs a local writing group in her hometown.