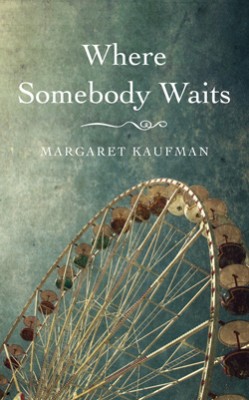 WHERE SOMEBODY WAITS
by Margaret Kaufman
PaulDryBooks, 201 pages

Critics never thought much of Ettore Scola’s 1987 film La Famiglia. Vincent Camby, writing in the New York Times, said that it has “the manner of a film that was conceived as an idea…The characters and events were thought up later.”

But the idea, to capture time as it drifts through a single family in the space of a single apartment, is so powerfully melancholic that I’ll sit and ache through the film any time. Even despite the soft filter gauze of the mid-1980s.

That same ache ventures forth from Margaret Kaufman’s debut novel Where Somebody Waits, out this month from Paul Dry Books. The tidy paperback, with its glancing, storyteller’s prose, covers about 60 years and four generations of the Davidson family, Jews in a small Arkansas town. While La Famiglia centers on the scholarly, even-handed Carlo—it opens with the infant Carlo in his grandfather’s arms on the day of his Christening and ends at a party for his eightieth birthday—Where Somebody Waits places its focus on Ruby, a fiery beauty from a poor downriver hamlet who seizes the opportunity to marry the gentle shopkeeper Bubba Davidson. “If he was so solicitous now, when they barely knew one another, what would it be like when they were lovers?” Ruby wonders of Bubba, whose real name is Nathan, on their first date. “Was it possible she would sleep with a Jew?”

The Davidsons are an archetype Jewish family of the south, whose story of dual identity and assimilation has been rarely told in film or literature, one major exception being Tony Kuschner’s play Caroline, Or Change. Bubba owns a clothing shop on the town’s main street; his brother is a doctor, who treats black and white alike. The family is vaguely more liberal than most of the town’s whites. Bubba, Ruby notices right away, says “colored” instead of “nigger.” But while the Davidsons don’t hide their identity, they are caught, as Kaufman writes, “in a frenzied limbo between worlds we didn’t quite inhabit.” Bubba, eager for business, donates fans to the church revival going on in town at the book’s opening with his store name on one side and a picture of Jesus Christ on the other.

Early in the book it appears that this duality, and negotiated compromise, will be the territory of Where Somebody Waits. It struck my interest: there have been shoe and furniture and dry goods stores all over the south with the Popkin name on it, distant relatives who disembarked in New Orleans instead of New York, who I imagine eat, as the Davidsons do, fried catfish and collard greens and cornbread.

But Kaufman’s book finds its emotional center in a different negotiation, Ruby’s own, between passion and stability, the urgent fire of the moment and the long simmer of a life well-lived. Ruby and Bubba’s immediately explosive love tempers. A year goes by and Ruby isn’t pregnant. “Lying on their bed, smelling his cigar, listening to the radio, feeling the evening creep into the house, purple and blue over the rose of Sharon outside their bedroom window, Ruby was surprised by sadness.” Ruby, who is so compellingly drawn out by Kaufman, hungers for a child, but she’s also reconnected with an old lover John Clay, who had been off at war.

Must she give up one for another? In La Famiglia, Carlo, too, is faced with a similar choice, between the steady Beatrice and her sister Adriana; the choice of Beatrice haunts him—and yet all the same it doesn’t. Life simply goes on.

“Anybody who tells you you can’t love but one man at a time, they don’t know what they’re talking about,” says Ruby much later in life. It took her decades to come to understand.

In Carlo’s lifetime in La Famiglia, Canby notes, “Italy has survived World War I, the rise of Mussolini, the Spanish Civil War, World War II, the fall of Mussolini, Nazi occupation, Allied liberation, the sinking of the Andrea Doria and the marriage of Arthur Miller and Marilyn Monroe.” Likewise in Where Somebody Waits, as Ruby fights and gives into passion, and tries to hold the demon whiskey and her uptight sister-in-law at bay, the US experiences World War II, desegregation, Viet Nam, terrorism at the 1972 Olympics, the counter culture, and AIDS.

Kaufman’s skill is threading all this through a humble, almost whisper narrative about a certain southern family writ across a short—or is it long?—period of time. As all time, Ruby’s era aches with our own need and our own enduring search for grace, aware as we are of our limited time to be alive.