The ten stories in Nana Nkweti’s debut short story collection Walking on Cowrie Shells offer tableaus of Blackness that are as varied as they are vivid. From tale to tale, Nkweti’s genres shift as surely as a living body does, limbs never at a single angle for long. The same assortment of stories that renders a realistic portrait of race and romance within New York City’s Black literary scene delves, with the same intrepid narration, into a crime drama’s layered violence and moral contemplation. Though varied, what anchors these stories within one another’s vicinity is a relentless inquisition of human connectivity, a tour that proceeds whether such connection hues grotesque and brutal or beautiful and palliative. Black girls navigate personal and cultural identity as the collection arcs through fandom space in “Rain Check at MomoCon.” Readers alight in a Lagos beleaguered by a zombie apocalypse in “It Just Kills You Inside,” where racial capitalism and white condescension commodify African people unto apparent death. In “The Living Infinite,” our transatlantic vault to Louisiana reveals Nala, a 202-year-old Mami Wata (a female water spirit and seducer of men) mourning her late husband. Nkweti’s commitment to sensory imagery traces trauma as it ricochets between generations, cultures, and families, as it glints in gendered violence, racism (as well as its internalized iterations), and neocolonialism.

The Salikis of “It Takes a Village,” a Cameroonian-American couple whose lives have become tabloid fodder in recent months, herd us into the first of many technicolor locales in Nwketi’s collection. Theirs is a grasping, desperate suburbia whose ache for commodity and appearance ripens it to their adopted daughter’s advantage, allowing her to refit its obsessions to her own ends. The financially well-off Salikis strive to fashion a quintessential nuclear family for themselves, adopting a young Cameroonian girl who, in their view, has been “imported straight from the motherland.” The Salikis are the vessels for a particular brand of States-based hubris: they immediately affix the American Dream to the daughter they have adopted once they learn from her handler that she has been separated from her biological family in Cameroon, insisting that they are a simple extension of her existing relations and will operate as a conduit for the social elevation of her African relatives, assuming all the while that this method of social mobility is what their daughter wants. It is a psychological commandeering, their own self-centered assumption of what she craves or desires. This bloodless violence is clever, though the Salikis themselves are not. Additionally, the girl’s handler insists to the Salikis that her name is not important, that they may rename her in any way they wish, giving the Salikis free rein to prune and reshape the girl’s identity. The treatment of the girl’s name by her adoptive parents and her handler borrows the infantilizing erasure of both African colonialism and Atlantic slavery, deprecating the personal history of the targeted to make way for the self-serving material or authoritarian growth of the privileged. The story’s point of view then switches to the daughter, who wields her sexual exoticization at the hands of her white male classmates, as well as her parents’ myopic obsession with her, to secure a stable financial future for herself. She is the one who tells readers her name, Zola, as she reveals that her own agency has always been a point of fact for her, regardless of whether any of the adults in her life were aware of its presence.

“Rain Check at MomoCon” carries forth Nkweti’s investigation of identity for young Cameroonian girls. The story’s protagonist, Astrid, is a Black nerd (a term I use endearingly) who feels dislocated in both her cultural identity and her plans for her future post-high school. She cosplays as a katana-wielding avenger at Comic Con, along with her cousin and friend (who are also dressed as fictional warriors), and finds kinship among the costumed crowd:

She is surrounded by mild-mannered accountants, data entry specialists, computer analysts—assorted neckbeards. All shedding their daytime skins, thrilling to their secret identities in a dreamscape free from the mundanities of rumored downsizings, late mortgage payments, and vacant relationships. For a brief time, they all are heroes. Her too. 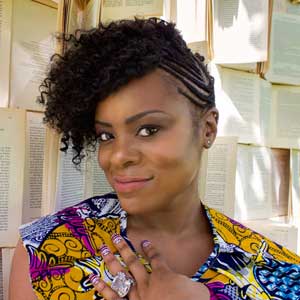 Nkewti’s quick, decisive characterizations of the nameless Comic Con attendants grafts personality onto setting in a way that fleshes physical location and imbues it with stakes of its own, granting it the capacity to be protagonistic, antagonistic, or any compelling combination therein. The reference to “shedding” renders a starkly visual and visceral return to a truer identity, tying heroism, in its fantastical dimension, to a more grounded honesty with oneself. This passage, as well as the rest of Astrid’s narrative, recognizes identity as it often exists: a cocoon of personal truths likely invisible to an onlooker’s naked eye, whose location is only known and accessible to the person to whom it belongs.

In “Night Becomes Her,” Zeinab is a bathroom attendant in the women’s restroom of a New York City nightclub. It is there that she observes that each of the women she meets at her post is “their own Scheherazade,” stopgap storytellers who portion out their anecdotes to her as they wash their hands or fix their lashes. Zeinab received asylum in the U.S. on the heels of a suicide bombing in her native Cameroon that killed her mother and several others. Though the attendant position that she finds once she enters the U.S. allows her to survive financially, her love of dance is what functions as her emotional scaffolding, as well as the source of her more positive feelings. This piece momentarily toggles between Zeinab’s perspective and that of the young woman, Hanifa, who set off the bomb. We learn that Hanifa was kidnapped from a schoolyard by jihadis eleven months prior to the bombing; she was forcefully married to and impregnated by the group’s commander. She seeks recourse and peace from her abuse through an act that tragically articulates the cross-stitch of trauma, announcing it as a serrated thing that catches and snags. This piece portraits how one of the elements with the greatest capacity for nurture and safety, motherhood, can be barbed and warped by darker macro forces. Nothing, it seems, escapes the purview of tragedy. This makes Zeinab’s attachment of freedom and joy to dance all the more triumphant, as it is dancing that mothers her in her mother’s absence, this thing that tends and nourishes.

But Nkweti’s nuanced portrayals of African Blackness have Black American casualties. In “Rain Check at MomoCon,” Astrid’s friend Mboya, though Cameroonian, is the character that is most closely aligned with American Blackness. Mbola criticizes Astrid for “talking white,” attends a “crowded high school with metal detectors and girls named after luxury cars and liqueurs like Alizé and Lexus,” and is a hypersexual aggressor who pursues Astrid’s romantic love interest, Young, despite his unreciprocated feelings. It is difficult to read past these facets of caricature in Mbola’s rendering, particularly because so many of the elements specific to her are exaggerations that serve as narrative opportunities for further complexifying Astrid’s character. The lean towards caricature becomes a wholesale plunge with the introduction of La—a (pronounced “La-dash-a”) in “The Devil is a Liar,” a low-income attendant of the mommyhood classes taught by the protagonist, Cameroonian law school professor Temperance. La—a is generally aggressive, illiterate, and levels her fertility against Temperance (who has had trouble becoming pregnant) as a means of recouping their difference in financial and social privilege. Even her name stands in stark, eyebrow-raising distinction, as the story collection in general is populated by African characters with gorgeous, varied names that speak to a thoughtfulness and careful networking to intricate personal and familial backgrounds. La––a’s name feels pulled from the punchline of a Def Jam comedy special; it palpably lacks that same attentiveness. Additionally, the fixation on La—a’s fertility, in contrast with Temperance’s fertility troubles, is particularly painful to read, as it breezily and biologically essentializes Black American femininity in service of a distinct textual sympathy for Temperance.

Many of these stories prove unique even in their formatting: “Schoolyard Cannibal” is a collection of scenes almost vignette-like in their arrangement and is interspersed with images. “Dance the Fiyah Dance” is pockmarked by the main character’s diary entries. “Kinks” is split according to its protagonist’s different hairstyles, and, in so doing, contours her relationship to her Cameroonian Blackness around these culturally-specific elements. The prose itself twins the measured, attention-sustaining adventurism of the worlds it births. The text abounds with colorful metaphor, colloquialism, and a linguistic veering to French, pidgin, and Arabic. Ultimately, each life that Nkweti shapes out for us carries the dents and impressions of the other lives it encounters, brandishing a proof of collision that speaks to a fragile, vicious, irrepressible mortality. 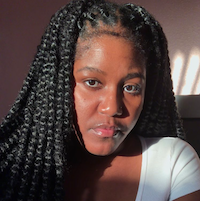 Juliana Lamy is a Haitian fiction writer from South Florida. She holds a BA in History and Literature from Harvard University, where she won their 2018 Le Baron Russell Briggs Undergraduate Fiction Prize. Her work has appeared or is forthcoming in Split Lip Magazine, Pidgeonholes, The Conium Review, and elsewhere. She is an incoming MFA candidate at the Iowa Writers’ Workshop.