EMBRACE THE NELSON:
Going Beyond the Pretty Narrative Voice
A craft essay by Dena Soffer

In my first graduate writing workshop, David Gates told a true story about Raymond Carver working on a piece of writing that wasn’t going well. Carver worked and worked, experiencing the feeling that all of us writers have felt—the piece was going nowhere. All of a sudden, the phone rang. He picked up, and the voice on the other line asked to speak to someone named Nelson. It was a wrong number, but this timely interruption made Carver think that maybe what his story needed…was Nelson. He inserted a new character by that same name into his story, which soon became “Vitamins,” and this proved to be the exact change the narrative needed. In a craft lecture at Muse and the Marketplace Literary Conference, Charles Baxter called this type of character a “Captain Happen,” someone to insert into a story to destabilize it on purpose.

In workshop, Gates encouraged us to make trouble happen in our fiction in a variety of ways, one of which was by using this exact technique. When I had somehow forgotten this advice halfway through the term, he reminded me. “Maybe you want to drop a new character into this mess,” he suggested in a letter about a story of mine that wasn’t quite there yet. My first-person narrator was dreamy and quiet. Not much happened to her, though the sentences did sound pretty. Rather than writing fiction, I was perfecting prose; readers came away from my work asking the exact question that no writer wants to hear: “so what?

Narrators like mine were everywhere in literature – wallflowers, idealists, poets. So why wasn’t mine working? I found a solution, as always, through reading. In “Glow Hunters,” a story from Kimberly King Parsons’ Black Light, the narrator, Sara, is a teenager with a tendency to ruminate. She is a thoughtful, introverted type who believes humans are “always in between tragedies, that anything good is a lull before the next devastation.” A narrator like Sara is without question a good writer, but also provides such a great deal of interiority that she risks infecting the story with passivity. Parsons breaks up Sara’s gorgeously reflective, yet potentially bleak first-person voice by looking to another character to take the lead for action: Sara’s best friend (and crush), Bo.

Bo gives Sara an active purpose right from the outset, declaring that the girls’ summer will be defined by their quest for psychedelic mushrooms. During their days on the road searching in cow fields, Bo tells outrageous lies to cashiers at truck stops and insists that Sara is the “designated [mushroom] gatherer.” Without a character like Bo, Sara might very well spend her entire summer indoors, fearing life before it can happen to her. Parsons knows that if we’re inside Sara’s head the entire time, we must at least have interesting things going on outside of it in order to carry a story.

Sara is aware of Bo’s magnetism. “Bo’s more brightly lit than the rest of us,” she notes in the very first sentence of the story, and soon becomes aware of the fact that her friend is bringing out something in her, too. “What Bo and I have going on – this electric something – I’m not sure either of us knows exactly what to call it.” Halfway through summer, Bo wakes Sara up in the middle of the night for sex, and the rest of the story is propelled by Sara’s hope for it to happen again. Here, Parsons has inserted a character that is doing quite a bit of work on the page, both prompting all the action while also serving as an object of desire. Bo is unafraid to make a scene, contrasting Sara’s passivity, and so because of her we have scenes, and the girls’ journey moves along much more speedily than it might otherwise. Readers have someone interesting to watch from the start, but the plot is truly propelled by the love scene in the middle, after which our narrator starts to want.

Desire becomes the main driver giving the story its shape, and Parsons knows to stretch this out, making us wait. Like Joyce bringing the perverted man forth and taking him away in “An Encounter,” Parsons has teased her readers with this middle scene. The day after their rendezvous, Bo doesn’t even acknowledge that anything has happened, which tortures Sara, and readers ache right alongside her. This is when the author’s choice to include such an internally-focused narrator makes most sense; Sara’s strengths shine brightly in these next sections, when she articulates her thoughts on the anguish of unrequited love quite clearly, despite being unable to say them aloud. These words nourish readers, who have of course felt this too. Not another inkling of intimacy appears again until the very end, when finally, Bo straddles Sara in the back of the car, “and it’s bliss.” Sara has gotten what she wanted, so the story is over, but she is still her same introspective self. “It’s the kind of sex so good you want it to hurry up and be over so you can talk about it for the rest of your life,” she thinks. “That’s something I think of while I’m having it, some way I might describe it later.”

There is great power in the narrative voice that sounds pretty, and perhaps even more in the gritty voice, the one that tells the same truths as the voice inside our heads. Dialogue can achieve this too; in Carver’s “Vitamins,” the narrator’s wife discovers her job selling vitamins isn’t all it’s cracked up to be. She says, “Vitamins…for shit’s sake! I mean, when I was a girl, this is the last thing I ever saw myself doing. Jesus, I never thought I’d grow up to sell vitamins. Door-to-door vitamins. This beats all. This really blows my mind.” There is a seduction in reading other people’s voices and realizing they sound like our own. Still, the voice can’t do all the work, no matter how good it may be. In fiction, we need surprises to push against our characters, challenging them. In fiction, something must always intrude: Nelson arrives, carrying with him a severed human ear from Vietnam. This changes the scope of the story, forcing readers to compare the vitamin-ridden, middle-class existence to the horrors of war.

It seems ludicrous now that I didn’t see it before: the essential shape of a story typically includes the introduction of something new into a character’s life. This something new could take on many different forms; writers may find their Nelsons in long-kept secrets, or a lacy underthing, or anything, really, that causes characters to react. These intrusions mold the plot, putting characters in situations where they have no choice but to change, bringing readers to a conclusion that does not just sound nice but brings the gut punch we are all looking for, the one that happens when a page of words manages to capture a precise emotion from real life. Only artists can do this. We know it when we see it, cutting across time and place, connecting writer to reader: that feeling you describe; I’ve had it too.

So, let some social misfit walk by your characters, or set roaches loose inside the house. See what happens. If you’re like me, you might not fully succeed, at least not yet. But in the words of a wise mentor of mine, “who knows, you might actually end up with a plot.” 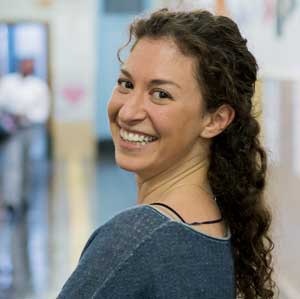 Dena Soffer is a writer and literacy coach from St. Louis. She earned her MFA from the Bennington Writing Seminars and is a 2021 recipient of an Author Fellowship from the Martha’s Vineyard Institute of Creative Writing. Her writing has also appeared or is forthcoming in Ploughshares, the Chicago Review of Books, and the Cleveland Review of Books. She is working on a novel.