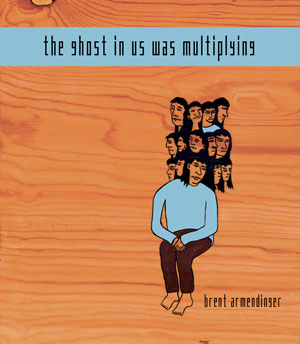 THE GHOST IN US WAS MULTIPLYING
by Brent Armendinger
Noemi Press, 94 pages

It has been thirty years since Bernstein, Hejinian, McCaffery, et alii stormed the gates of poesy—twenty since some of them hitch-hiked up to Buffalo. Depending on where you sat, they were either a palliative or a wound—in either case, necessary. They ran over the daisy with a lawnmower, the better to see the fibers of its petals. In a preface some time back to a re-issue of The Sophist, Ron Silliman mourns that “seventeen years later . . .[it] doesn’t look as radical to the eye as perhaps it once did.”

That isn’t necessarily a bad thing. They accomplished what they set out to do and thus of course Bernstein’s work looks more familiar. There is a time to shoot down the rapids with funky alphabet soup spraying in your face, and another to issue out into a broader and slower expanse of river, where you can put your head up and see the sandstone cliffs. The essential debate of whether a word is a word or a picture will go on forever, without closure, as it should. Beyond anyone’s manifesto, how much rhetoric and how much lyric, how much narrative propulsion and how much regress, are good for the brain game once known as verse, goes under negotiation with every keystroke of every poem.

There may be coteries today, tendencies that aggregate around a particular magazine (Typo, Memorious), but to speak of any sort of school at the present time is schematic. Beyond that, formal boundaries have become so fluid (not to be confused with the old free verse vs. sonnet tension), that it is, if not meaningless, at least inexact, to speak of “prose poetry.” For where the poetic ends and the prosaic begins is case by case.

Into this deregulated field comes Brent Armendinger’s the ghost in us was multiplying, announcing its large aims with lower-case modesty. I couldn’t help think of Fanny Howe—not that Armendinger is derivative, or even samples her—but the penchant for deep aphorism, like hers, makes for a memorable, logical, even quotable, quality to poems that are also oblique, self-referential, and as is often the case with poems that foreground the nature of language, filled with deliberate non-sequiturs, and sideways meaning alongside wordplay.

The body keeps asking the body to become
a zero or a sum. This is the lesson
of intimacy. This is the lesson of
less than me—it begins
in a quietness sometimes far—a cup
on the shelf reveals my body
to be sand, too late to fire it
in the kiln. Impossible
to drink from, I fill it up
with water.

A deeply contemplative spirit drives the sentence along the line, not ironic but rather sincerely questing, bringing us into its logic of austere diminishment, the body as sand. It is beautiful in the way of a mystic, not cloying.

Parts of the book are witty. From “Casual Sex”:

I found him like I found everything—
on my way home from the euphemism
on the wrong side of town.

Armendinger rushes into image, metaphor, and rhythm, those mainstays of lyric, for in the end, with his love of couplets, tercets, quatrains, he shapes what he shakes.

When you get home, don’t open the book,
but lay it beside
the others in your bed, adopting the space

as if a second sleeper. What is sex but this?
A wingless craft,
a witness. You disembark without turning off the light,

pulling bits of him through the coils,
the reservoir above.
Free of the mind, the one who gave it to you.

Nor is he above falling, as above, into stretches of the pentameter Pound meant to break. These are tender verses, shy of psychology, fond of philosophy. I’m far from the first to comment on sexual/textual binary, but here it is, as reverent as Blake. One of the things I like very much about this volume is that it deflects any definitive statements about derivation or influence to a mere guess (excluding the epigraphs). Twenty different poets came into my mind as I read these pages.

Why do I live
in a house of newspapers?
Why does my window
stare back at me, the grief
of someone else’s mother? 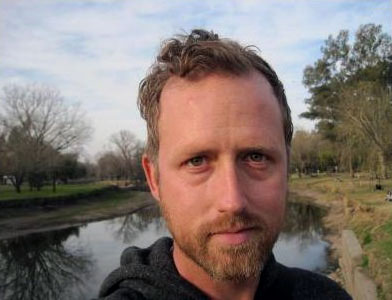 Haven’t we all asked ourselves these questions? If not, shouldn’t we? The poet is sure-handed with junctions and disjunctions and other verbal surprises, keeping the mind on the edge of the next revelation. “Under my clothes I’m covered/in aftermath.” “Can I call you/Palimpsest?” The answer is yes. Though sometimes the self-awareness of ink, papers, documentary, reading, words, vowels, homework, causes a certain fatigue. Like the lilies and clouds of yore, we’ve heard them too many times before. Yet this is a multiplying ghost that hasn’t lost its sense of measure, proportion, symmetry, even if its emotion is recollected more in insomnia than tranquility.

It is in “Landfall,” perhaps the centerpiece of the ghost in us was multiplying, that the author gives way to full-blown rapture, no less than Wordsworth in The Prelude. The Romantic emerges unashamedly, if, as always, somewhat shielded by the imagery of text-in-itself.

Flocks
divide one soul across their thousand
flapping wings. The clipped flying
in my chest, no color but remainder,
the valves that could not usher
flood, the too much
soul or exile.

…You lie here, beside my handwriting,
how we sliced you, your body
now a thousand sheets of paper
devoted to a day.

Innumerable poets, at an impasse, settle for mere eclecticism, not reconciled by any continuous impulse. The worst one can say about a collection, unless it is a Selected/Collected Poems, is that it reads like an anthology. Ghost follows its flying credo to the ultimate consequences. I think I can speak responsibly of inspiration, as long as that word is also understood as simply drawing one breath after another. The lines, expansive, are kept under tight control, no matter how far-flung the mindscape, how swift the landfall.

The birds where I write to you,
their short loud spurts
hung by tremolo. The way
the sun flakes off in slivers.

This work is mature, all the way up to the imaginative titles: “Sky Math,” “House of Stopped Clocks,” “Promiscuous,” “Third Definition of Daughter,” “The Myth of Clotting.” Seldom do I feel that reading a Table of Contents creates a sense of drama, but that is the case here. Armendinger is a poet of stamina—80 full pages of small type, excluding preliminaries—and when I say full, I mean full. I’m picky, always mentally editing (sometimes unfairly) what I read, yet I couldn’t find a single poem to pluck.

Certainly this book challenges, makes the mind restless, but I found it a surprisingly quick read. I guess I just got absorbed and forgot to object that it looked difficult at the outset.