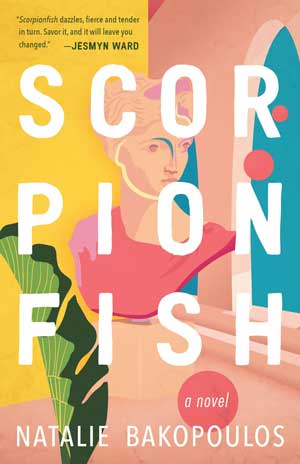 Scorpionfish by Natalie Bakopoulos begins with a return. Mira, a Greek-born academic in her late thirties, arrives in Athens after her parents’ funeral. She must sort out the remainder of her parents’ affairs—Mira’s childhood home in Athens and another apartment on an island referred to only as N. While Mira is stranded outside her apartment building without a key, she has a chance encounter with her next-door neighbor, a sea captain. Later, the pair spend night after night on their adjoining balconies. While they are unable to see each other clearly, they share cigarettes, beer, and conversation. Both characters are grappling with grief, of sorts: Mira has lost her parents; the Captain has lost his position as a sea captain and is about to divorce his estranged wife.

Bakopoulos splits the novel between Mira and the Captain’s perspective, their two stories spinning out alongside each other like “a double helix”—often occupying parallel tracks, but enjoying brief points of intense connection as they navigate loss.

Guided by Bakopoulos’ observant prose, the reader enmeshes themselves in a dynamic social scene. We meet Nefeli, an acclaimed artist in her sixties; Aris, Mira’s ex-lover and a rising political star who is currently engaged and expecting a child with a Greek movie star; and Dimitra, Fady, and Leila, a family hosting Rami, a teenager who fled alone from Damascus.

However, the cast of Scorpionfish includes more than just the living. We also meet those who have recently passed: Haroula, Mira’s aunt and Nefeli’s lover; Mira’s father, and Mira’s mother, a life-long alcoholic who struggled to acclimate after the family left Athens for Chicago. And, while Aris is still alive, there is a distinct split between the current Aris, and the Aris with whom Mira shared an on-and-off relationship for many years.

These ghosts mingle with the living, creating an environment that cannot be easily categorized by descriptions of past and present. As Mira considers her childhood apartment, she thinks it is “as though I could walk through walls, my past and present, and future selves all negotiating the same space, bumping shoulders, tripping over feet.” In another moment, while Mira is listening to musicians play, she catches a glimpse of “my mother [dancing] a hawk-like zeibekiko in a yellow dress.”

Mira’s perspective is, perhaps, more compelling than the Captain’s. Yet, often her voice feels detached, nearly clinical. She refers to some friends by their titles (the Captain, the novelist) rather than their full names, and her emotions, too, feel somewhat suppressed: while the death of her parents begins the novel, we learn about the manner of their death only in the final pages. We may understand her cadence as a product of her career—Mira is an ethnographer and an archaeologist. Yet the physical presence of ones she lost hints at the depths of her grief, a roiling turmoil below Mira’s academic cool.

We plunge into the streets of Athens. Mira and the Captain spend much of their time exploring the city, and eating at tavernas, reconnecting with current lovers, former lovers, and family members. Athens is constructed with delicacy, streets mapped with close detail. The light, in particular, receives special treatment. Sunlight “[shimmers] through olive trees, like an invitation to a new world,” Mira considers how morning light shines off of the Captain’s hair, and “the flush of sunset.”

In these passages, I am reminded of how I once heard a photography professor describe successful photos: “every place has a certain type of light, and great photos capture it.”

When we move through Athens, we linger, observing the light or the outfits of diners at a restaurant. However, there is also a familiarity to the characters’ movements. This is perhaps what makes Mira’s perspective so successful: Bakopoulos deftly conveys the experience of returning to a beloved place, the experience of re-seeing. 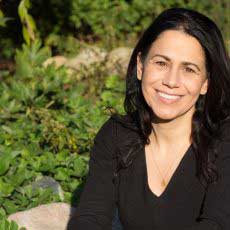 Yet, despite this tenderness, Bakopoulos’ descriptions of Athens never rely on nostalgia-driven sweetness. Athens is struggling through an economic crisis and a charged political climate. Strikes and protests fill the streets. Bakopoulos writes, “one [home] seemed like it had been burned in a fire, and the next was fit for a magazine photoshoot.” Mira eats at trendy restaurants-cum-vintage Airstream trailers and gives English lessons at abandoned schools now hosting refugees; sunburnt tourists walk the same streets as violent nationalists who attack Mira after hearing Mira, Dimitra, and Rami speak in English and Arabic.

As the ghosts of lost loved ones intermingle with the living, the experience of past Greeks never feels distant. We see “large concrete apartment blocks built during the junta transitioned to old neoclassical homes” and streets named after key figures during the Ottoman rule of Greece. Athens’ identity refuses to be delineated—into impoverished or prosperous, monocultural or multicultural, contemporary or historical.

In one particularly striking moment, Mira attends a retrospective of Nefeli’s work. One work of art shows a video of Dimitra, Leila, Fady, and Rami. In the background, scenes of conflict play on a loop, including—”a scene of South African apartheid, footage of hundreds of Bosnian refugees walking a dirt road.” Perhaps these juxtapositions serve to illuminate the interconnectedness and cyclical natures of traumatic displacement. However, the implicit voyeurism in this exhibition also seems to ask: to whom do these stories belong? What is something that we live, and what is just a backdrop—something to watch, but not experience firsthand?

In Part II of Scorpionfish, Mira travels to N island. Here, her parents kept a vacation home where her mother dreamed of spending retirement—another place where Mira cleans, sorts, and confronts ghosts. On this island, Mira turns inward, scrutinizing her relationship with her parents, Aris, and Nefeli.

Bakopoulos approaches both family tensions and Greece’s social, political, and economic issues with extreme nuance. Scenes of family tension are particularly striking in their tenderness. One night on the island Mira drinks a glass of whisky and dresses in her dead parents’ clothing.  At another point, the Captain returns from a run to his soon-to-be-ex-wife, Katerina, and their children:

I walked to the massive refrigerator and filled my glass with ice, making a clownish show of it, acting surprised as all the ice tumbled to the floor.

Katerina looked up absentmindedly, and Ifigenia asked, ‘What is wrong with you?’ before they realized I was trying to make them laugh.

There is a deep yearning here; it is a heartbreaking scene of intimacy left unfulfilled.

At the close of the novel, Mira and the Captain consummate their relationship. Yet, as with their correspondences on their adjoining balconies, the reader sees little of this interaction: “a shift of the body, a look on Mira’s face, her bare shoulder.” Indeed, this intimate scene directs the reader to consider how bodies are considered throughout—always veiled, hidden beneath clothing, or behind glass. The final description of intimacy also recalls an earlier description Mira gave of the boundary between her and the Captain’s apartment: “If the light was right, you could see the shadow of a person behind the cloudy glass partition.”

In Scorpionfish, we see characters in tantalizing glimpses. At times, they seem to be jockeying for the reader’s attention. Sometimes I couldn’t help but want to dig deeper! But why would we be entitled to see more, to learn more?

I recall a moment from early in the novel, where Mira considers the barrier between herself and the Captain: “separated by a wall of opaque thick glass, an architectural veil behind which I heard him now moving from one side of the balcony to the other. I could not see him but felt his presence.” Scorpionfish offers no complete or comprehensive views of Athens or its inhabitants. Instead, we must confront the limits of our viewpoints and expectations. We must consider the stories left untold. 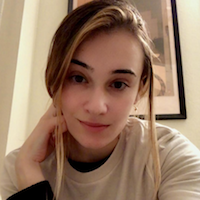 Aleksia Mira Silverman lives and writes in South Florida. She holds a BA in English from Bowdoin College, where she served as founding editor of The Foundationalist and currently serves as contributing fiction editor for Barren Magazine. In Fall 2021, she will begin her graduate studies as an MFA candidate in fiction at the University of California, Davis.