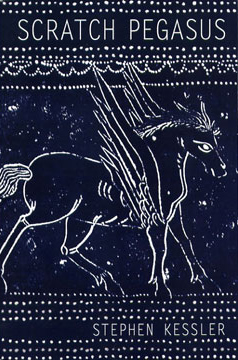 Stephen Kessler’s agenda in the poetry of Scratch Pegasus would seem to be that of the artist in his poem “Hopper”: in an era where inscrutable conceptualism has become somewhat of a standard, Kessler is confident that his “representation / so square compared to his successors’ transgressions / looks now purely formal and coolly classical … in rooms full of murmuring tourists / relieved to see what they recognize”. It’s lamentable, then, that Kessler’s altruistic aspirations towards a communitarian poetics, a poetics of reachable clarity, are troubled by an unintentional (or so one hopes) exclusion of the modern reader.

True, the poet occasionally hits the mark with poignant imagery (“the barking park / where the city’s dogs / sniff each other’s butts / and tangled strips of toilet paper / fly like flags from lampposts”, “Gold light streams / through cold beer”, etc., obviousness that is not condescending but pleasantly relatable), but such imagery drowns in problematic particularities.

Kessler makes clear that he is in his later years, a state of being meant to inform his poetry, but he is heavy-handed in dating himself. While certain details, though culturally past their prime, may be innocent enough (as in “Driving a Stake Through the Heart of Beatnik Vampires”), the book far too frequently resorts to voyeuristic recollections of women past, reminiscences that recall the less-than-pleasant gender norms of an earlier time. Babs, Dotty, Cathy, Marina, Miss Masacas, and others are remembered for their breasts, their legs, the poet’s attraction, yet the dismayed reader finds no relief in Kessler’s poems of the present, either: the poet grins knowingly as a boy feels up his curvy lover, imagines teenage lovemaking after observing a pair of skateboarders, and time and again equates the sex act to devouring food (“Death by Tiramisu,” “In the Dark,”). It’s a misogyny disturbing not only for its disregard of feminism’s advances, both social and literary, but for its predictability; one wishes that Kessler’s renegade-against-opacity persona were a little more rebellious, a little less tame in its transparency.

Indeed, Kessler seems to overlook that which makes Hopper’s paintings so successful: while we recognize the subjects and are invested in their stories (or the stories we project upon them), there remains an element of mystery, ambiguity, subtle tone, that renders them universal, relatable in their unknowability. It’s a voyeurism with the shades half-drawn, a matter of human curiosity trumping point-blank representation. Kessler’s interest in the ephemeral beauty of an individual moment, the act of “trying to fix [an afternoon] / in time, hold[ing] its momentous weight” or “transfusing the ordinary night / with unrepeatable beauty, one-time-only”, is certainly a valid poetic aspiration, but is sabotaged by his insistence on spelling his message out for readers in a way that makes blaringly obvious the retrospective act of writing. In the section entitled “Some Teachers,” for instance, each teacher is summarized in the opening lines, a technique that veers towards rote gimmick: “He worked for us when I was a little kid”, “He was the toughest coach I ever had”, “He taught philosophy at UCLA”, and so on. Otherwise-compelling poems are diminished by neat take-aways in their final lines, as in “Wild Man” (“The hunt continues”) and “John C. Padilla” (“I owe him more than I can ever repay”). Kessler is so conscious of eschewing abstraction that he overexplains in an explicitness insulting to the reader’s ability to actually read, and glean meaning from, his poems.

It is only when Kessler returns to language as an object of interest rather than blunt semantic object that the reader is permitted to appreciate his craft. Redeeming lines like “verses rhymes with versus and they are against Everything” are refreshing and clever, but it’s as if Kessler is shy about letting them peek through their more obvious counterparts. When he becomes less tied to a cut-and-dried “observe and report” strategy and lends insight not into his own lasciviousness, but rather his relationship with poetry itself, Kessler is (perhaps paradoxically) much more accessible on the universal level. “But poetry was doing something to me”, he writes (in an ending line that does invite further thought): it is madness (“Relish your lost mind and embrace the mania, / … You are a poet”), selfishness (“He wrote for his creative writing students / more than a hundred letters of recommendation, / thereby neglecting to write a hundred poems”); an expression of humanity. It’s a shame that Kessler’s final two poems are among the only ones to evade overwriting—“Bird in the Chimney” finally permits observation to collect without qualification, symbolism that speaks for itself, while the titular “Scratch Pegasus” encourages a second reading in its whimsicality. One likes to think that Kessler’s next volume will include fewer wedding poems and seedy recollections and more of this such work; as of yet, it may be that the poet has made a dent in the campaign to contrast conceptualism, but it’s the sort of dent that one discovers days later in the fender of their shiny new car, nothing to be done but fume quietly to oneself.