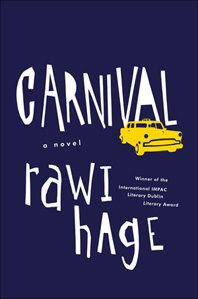 Fly, the narrator of Rawi Hage’s fabulist novel Carnival, released in the US on June 17, is a literature-obsessed taxi driver—and child of circus performers—who imagines himself a super-hero, avenging wrongs perpetrated on the vulnerable and the poor. Books—particularly the subversive kind—are his sword. One night, he picks up an arguing couple. The woman, Mary, is crying. Her husband berates her for her introverted, bookish ways. He wants some action. “I am tired of this, do you understand?” he says.

Fly flies into a rage, forces the husband out of the car, leaves him by the side of the road, and brings “sweet Mary” back to his book-stuffed apartment. “And she laughed and walked among the garden of books,” he says, “and then we took off our fig leaves and made love in the corner, where verses from heaven touched our bare, cracked asses that hopped and bounced like invading horses in the holy lands.”

We flew out of the city and we landed on the page where Moses split the sea and the Jews marched between those suspended mountains of water, hovering, humming on both sides, and the poor expelled merchants wondered if Moses knew what the fuck he was doing. What if his hand got tired and he accidentally dropped his magic cane, or got distracted by a wet desert ass, or lost his sandals, or what if that lush single malt of a God changed his mind again and the fucking Red Sea closed in on them with its menstrual red liquid?

It’s unusual for Fly to have a partner in these imagined sexual-literary journeys. On most days, he lies down on the magic carpet he inherited from his father and masturbates while traveling to far off lands, fighting in epic wars, crossing rivers, and visiting bathhouses. Hage wants to say, naturally, that reading and writing are acts of both inward self-absorption and outward imagination. “I once contemplated becoming [a novelist] myself,” says Fly, “but instead I stopped typing and picked up another creative habit that has kept my fingers busy ever since.”

Flying solo on his magic carpet, Fly is free, unleashed from the demands and expectations of others. It’s an enticing possibility, certainly. Fly’s visceral need to escape and yet hover nearby is reminiscent of Cosimo, Italo Calvino’s twelve year old protagonist of The Baron in the Trees, who escapes his insecure father and pedantic, overbearing mother by going to live in the oaks and walnut and olive trees of the family’s estate.

The problem with masturbation as escape (perhaps not unlike living in the trees!) is that it’s ultimately unsatisfactory; the act may evoke powerful sensations, even feelings of the eternal, but emotionally it’s limiting. And that’s the problem with this book. Hage is a truthteller (Fly as a child in the circus was employed as a discerner of secrets). But for all of his ability to clarify, break down, and isolate the undercurrents and deficiencies of society, Carnival lacks emotional depth and nuance. Indeed, Hage’s love of literature gets in the way: he’s too busy making clever references to other writers and books and he puts too much faith in the conceit of the liberal, wise, compassionate, open-minded, and yet non-believing writer as a foil to small-mindedness, greed, and stupidity. But the great force of literature is its ability to explore the short-sighted and parochial nature of man—and not condemn it.

This is not to say Carnival’s characters lack depth. The plot centers on Otto, an empathetic, but highly dogmatic political activist, who is Fly’s accomplice righting wrongs against amoral CEOs of multi-national corporations, vapid rich kids, and pathological psychiatrists. But Otto, a victim of society, breaks down and commits a horrible act. Hage portrays Otto’s descent with evenhanded care and love. “We are capable of harm,” concludes Fly.

Hage has written Carnival, his third novel, entirely in monologue, a difficult form. Fly’s voice alone has to sustain the reader, who also must feel terrific empathy for Fly the author doesn’t deliver. Hage seems to admire the Hungarian novelist Bohumil Hrabal, one of the many authors he refers to in the text. But Hrabal was a capable of delivering monologue that was outrageous but also hilarious and very, very sad.

One problem is that Otto’s earnest moralism invades Fly’s own language; this has the effect of distancing the reader. Moreover, the monologue is filled with predictable, and therefore uninteresting, condemnation—of miscreants, polluters, suburbanites, Catholic priests, and even lawns. When Fly brings a pair of “typical beer-bingeing sports fans” to his prostitute friend Linda and the encounter falters (for the poor behavior of the Johns), Fly beats them up.

There was nothing in the news about tourists getting robbed, fucked, or punished. Idiots like that are usually too proud to admit defeat. They just go and get drunk and numb their wounds and the next day go to the gym and pump iron and check their muscles in the mirror…There is no mirror that they pass and do not greet with a flex of biceps or the slow landing of a leg. Inflated balloons with broken cords, always walking as if they are taking their first step on the moon.

Contrast this withering assessment with the nuanced tone of the take-out of a similar scene from Calvino’s The Baron in the Trees. Here, Cosimo’s brother, the narrator, describes the outcome of an episode in which Cosimo’s love interest Viola, known as the Sinforosa, has duped the band of urchin boys who also live in the trees.
What happened afterward was more difficult to understand; the Sinforosa’s “betrayal” seemed to have been twofold: partly her having invited them into her own garden to eat fruit and then getting them beaten up by her servants; and then her having made a favorite of one of them, a certain Bel-Loré—who was still jeered at it for it—and another, a certain Ugasso, at the same time, and set them against each other…One of these episodes or some episode like these or all these episodes together had caused a break between the Sinforosa and the band, and now they talked of her with a bitterness mingled with regret.

Hage, who was born in Lebanon and lives in Montreal, is profoundly interested in the global forces that bear down on society; his book attempts to take account of the impact on people of migration, racism, and global capitalism. It consistently sides with the losers, even when they commit horrendous crimes. But Hage makes a mistake, it seems to me, in devising an escapist narrative to confront the dysfunction that’s only grounded in an imaginary city (if it’s Montreal, I don’t quite recognize it) during the bloated week of carnival. This disconnection became apparent to me toward the end of the book, when over the course of a few days a number of taxi drivers are murdered. Each killing is described in detail, somewhat in the fashion of Roberto Bolaño’s clinical description of murdered factory girls in the masterpiece 2666. Hage’s account of the taxi murders made me think of Bolaño—that was Hage’s point, I imagine, in this novel about books and reading—but also long for Bolaño’s emotional precision and his simultaneous attention to the sad, hollowed-out cry of anyone attempting to live.

Nathaniel Popkin is a journalist, author, editor, film writer, historian, professor, and critic. Since 2002, with the publication of his first book, Song of the City: An Intimate History of the American Urban Landscape (Four Walls Eight Windows-Basic Books), he has been a distinctive urbanist voice in the conversation about Philadelphia’s past, present, and future and a careful observer of cities in the context of American life. According to Tom Sugrue, historian of the University of Pennsylvania, Popkin is “a visionary with two feet on the ground, a poet who finds verse in the everyday.” Lion and Leopard, Popkin’s novel of historical fiction about the romantic movement that shook the foundations of the American art establishment in the early 19th century, will be published by the Head and the Hand Press in Fall 2013.