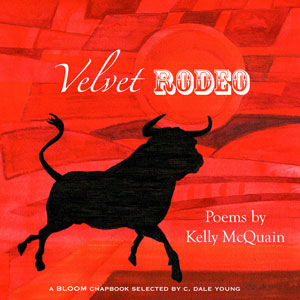 Between a single dawn and dusk, I shadowed a speaker through adolescence and into adulthood, from young summers in West Virginia to liquored confessions in Mexico. Kelly McQuain’s Velvet Rodeo is a rare chapbook that spans such lengths—though, that is one of poetry’s potentials: every verse paragraph a vignette. And yet while McQuain’s poems are distinctively narrative, they are rife with imagery; from nature to anatomy, McQuain’s imagery evokes experience, from discovering one’s body to discovering parental fallibility. It is fitting then that Velvet Rodeo’s opening poem, “Scrape the Velvet from Your Antlers,” begins spiraling outward, from pastoral aesthetics to something more existential:

Your brother and sister run to catch the horizon.
You wade slowly through the lashing,
alive with combustion, eager for bursting.
This hill, once a forest, has long been cut low,
untilled, rock-strewn, stubbled
with stubborn flowers. Soapwort,
Queen Anne’s lace, whorled loosestrife
seeded scattershot

The evocative action at the beginning of this passage, “run to catch the horizon,” casts a human experience on the plainly stated imagery following; in this sense, McQuain quite literally illustrates one of the poet’s roles in this world: observer—though, the speaker is clearly acted upon by their surroundings, thus debating the boundary between oneself and the material world. Dwindling lines to a list of plant life, McQuain remarks on the simple, obvious beauty of the natural world; however, his careful selection suggests that one meditate on humanity’s naming of the world—nature’s emotional effect on humanity.

As “Scrape the Velvet from Your Antlers” continues, it drifts further from the natural world and deeper into the psyche:

as you cast your gaze down-road, past trailers,
to a line of pines
gloating their evergreen promise of shade.
What kneels to drink in that dark?
What hooved thing—some player
of panpipes moving? A preacher
might call this moment choosing.

Here, the speaker sees something actually human in the pastoral landscape. This moment demonstrates one’s inability to escape the self, even alone in the natural world. The “preacher,” or the lurking preacher of the western mind, interrupts as an unasked question. Is this question of morality, guilt, or is that just this reviewer’s own relative reading? Either way, the ambiguity of McQuain’s work is the beauty of it: to leave the reader to discover themselves in his lines as the speaker discovers his or herself in the world painted in the poem.

Another beauty of Velvet Rodeo is the play with form. As noticed in the second passage, McQuain does not eschew rhyme, which is perhaps the most striking formal choice of this chapbook. McQuain’s poems prefer internal and slant rhyme as sly musical choices rather than traditional end rhyme or stanzaic patterns. These softer choices come off restrained, self-aware, yet not completely ironic or absurd, as if McQuain wants you to unabashedly enjoy the music of lyric poetry. He is not a stranger to other sonic devices either, such as sibilance or alliteration, the latter not used cheaply in “Alien Boy, ” a poem about the possible infanticide of the speaker’s friend’s brother: “I’m lucky not to have had to draw // such large lines between loves.” The poem doesn’t hold back in detail, plainly addressing the infant’s condition, micro-penis, that may have led to the parents’ and doctors’ decision. Midway through the poem, the reader learns of the infant’s condition and the possible outcomes:

flood him with hormones
and raise him a girl, or…?
Or let nature take him as nature nearly had. Should he live?

These lines are plain and honest, blunt and unapologetic—as they should be. The following lines, “Who among us could // tell which fear finally exhausts us?” pushes aside the urge to accuse for a moment and asks the reader to unfathomably empathize for both the boy and the parents. McQuain’s ability to develop sympathetic characters in a few lines is an enviable skill and speaks to his narrative ability; one could also suggest that the plain narration of “Alien Boy,” much like the plainly stated description of “Scrape the Velvet from Your Antlers,” declares that the story is poetry in and of itself.

As Velvet Rodeo continues, the reader ventures more into the social than the natural, much like a teenager thrust into social situations. “Creation Myth” assembles and disassembles the American dream through analyzing the speaker’s parents’ relationship and youth. Wondering if the father ever experienced a spiritual crisis, the speaker asks, “Did he question whose hands he’d always been told / had molded those hillbilly mountains from dirt?” The question itself remains unasked and unanswered of the speaker; however, since asked of the father by the speaker, the son, McQuain suggests a connection through similar emotional distress, as if inherited. Further down, McQuain retrospectively remarks on the repression or the expression that make a person:

When my father was more boy than man

he wanted to live in Greenwich Village. Never Did.

Drafted into the Army instead

Although the difference between father and son remains unwritten, this retrospective illustrates a tough man—though it also appears that looking back the speaker’s father shared the same aspirations of his son, though unrealized.

After a chapbook full of questions of self and purpose, Velvet Rodeo’s narrative offers no final answers, but, playfully, a poem about a struggling mechanical bull rider:

Now, on the floor, as he picks himself up,
he recalls an old line from a picture book: Oh, oh,

the places you’ll go! Hand him his hat. Time to rodeo.