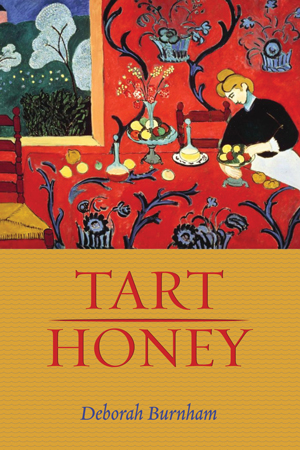 Divided into four sections, Deborah Burnham’s poetry collection Tart Honey seems cut into citrus slices— edible, organic, and aware of some lost and bodily whole it re-composes in the formation of its parts. The poems feature modern relationships with too much absence, a dissolving picture of Apollo 13 soon taken over by a persona attempting to collect her body into experiencing her partner, and paintings with colors that spill into cells, among other simultaneously harmonizing and divisive images.

Divided into four sections, Deborah Burnham’s poetry collection Tart Honey seems cut into citrus slices— edible, organic, and aware of some lost and bodily whole it re-composes in the formation of its parts.

Experiences and sensations become as important, if not more so, than physical presence, even on occasion manifesting into doppelgängers of bodies. For instance, in “The night the screen fell out” Burnham’s persona has learned “to live bravely with no other body/ in the house” just in time to have a bat cut through her room at night. This bat is not alone either, but casts a reminder for the persona’s partner as she expresses:

your absence hovers silently, the bat
at play around my head, more like a thought
of sound than sound itself.

A missing partner becomes an intrusive body, absence molding into a shocking presence and seemingly contradicting the persona’s sentiment that she is learning, by example of her mother, how to be the only body in the house. The bat is kept away from direct metaphor or simile as Burnham writes “your absence hovers silently, the bat” a line which invites us to consider an absence as an animal, but also refuses to demand it. This careful wording and use of line allows the body to be at once an animal, a stand-in for the absence of another body, and a thought that the persona experiences inside her own body. If there is only one bat, we lose it in the dark only to have it resurface as a potential triptych, all in a very small space and inside a rumination on being alone rather than visited by airborne mammals. 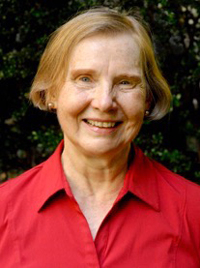 Burnham’s poems regularly touch on re-occurring events, namely the departure of a partner west, and what is done following separation. In “Winter Apples” Burnham’s persona gathers apples into glass bowls, explaining “I’d cut one, saving the hardest,/ greenest against your coming.” almost appearing to make a bet with the ripening fruit to prove the inevitability of a return. The reader is given this “green mellowing to gold” an assurance that, this often-mentioned departure has not only an end, that being a reunion, but comes, again, with presence. Here, the filled bowls and the lessening fruits countdown and the least ripe is offered as a sort of place-holder, the least edible thing, the longest lasting, and the body that will be consumed on another’s return.

The next poem, entitled “Ripen, or Not” encourages the reader to understand the poems in conversation and written in awareness of one another. In this piece, the persona is with her partner, and again with bowls of fruit. This time, however, the persona has kept fruit “cold and sour, as if by forbidding them/ to ripen I could stop time and keep you here.” Again, we are given the sensation of an oncoming departure and a clock by which to watch its approach, fruit approaching edibility, ripeness, and by that measure, decay as well. These two pieces offer what is perhaps a simple and legible picture, but do so in conversation and cooperation with one another, asking the reader to approach the book as a whole and consider its pictures, moments, events, and absences to be ones that repeat, build, and echo one another.

In the third section of Tart Honey, entitled “Shadows Waver Between Your Shape and Mine,” the poem “Quoting Sappho” also features a fascinating approach at absence as something tangible, personal, and communicative. Burnham writes, concluding the poem:

and I warm myself, make my breath stop or leap,
remembering that sweet Sappho knew exactly
how the tongue fails, ailing across words like fire
and rush, sitting close to one she loved,
far from saying what she meant or wanted.

This final stanza, like the rest of the poem, fails to fulfill the literal promise of the title; there are no quotations from Sappho. What is offered instead is a mistake, a failing to communicate, a difficulty with both the literal word and how its performed through the body and with the intended meaning. Neither comes across, and so the act of quotation then becomes a mimicry of incompletion, a mouthing of a historical and mythic figure’s silence about and inside of love. Perhaps like the bat, Sappho is made quiet but multiplied, speaking again in an open empty mouth, in an attempt but not a production. To bring all of this to light inside of language and poetry renders this poem, like many others in the collection, a ripe site for navigating the outlines of presence and absence, the spaces we use to make words and their meanings, and how their failings, departures, and unquotable areas can and should be made communicable.

“Parts and Wholes,” a poem I found to be the most emblematic of the themes of this collection, (at least in my reading) is composed in two stanzas and begins with a jigsaw puzzle. A young girl first tries to navigate the puzzle by guessing

what the pieces were, sometimes saying “flower”
for a clown-face, but soon she understood:
each piece had its locked-in place.

The child in the poem begins navigating by image and word, but, when this fails, resorts to understanding shapes and the utility of the pieces, leaving the picture and the meaning of the whole to be something arrived at as conclusion. The second stanza of this poem begins “Old couples stay together touching edges,” immediately setting up bodies as at least partially analogous to the pieces, asking for their status as separate wholes to be set aside. The persona goes on to describe these body pieces as “next to one another, soft and blurred,/ but practiced, sure.” presenting a picture and a fit that seems to fall short of puzzle. The image is blurred and the joining soft, not uniform or perfect or enduringly static, as in the puzzle, but still with enough intention and rehearsal to show belonging.

This book presents a rich and soft array of bodies and their people without dodging the knowledge that failure, absence, loss, and division can be just as full, complicated, and crowded as a full house.

Deborah Burnham’s Tart Honey tours a partnership, showing what it loses, how it fluxes, and where it exists when it is and isn’t physically manifested. Cutting fruits and thinking of words for the silence in an orchard, Burnham’s poems circle in on specific intimacies and often read like letters intended for a partner in a long-distance relationship. This book presents a rich and soft array of bodies and their people without dodging the knowledge that failure, absence, loss, and division can be just as full, complicated, and crowded as a full house.