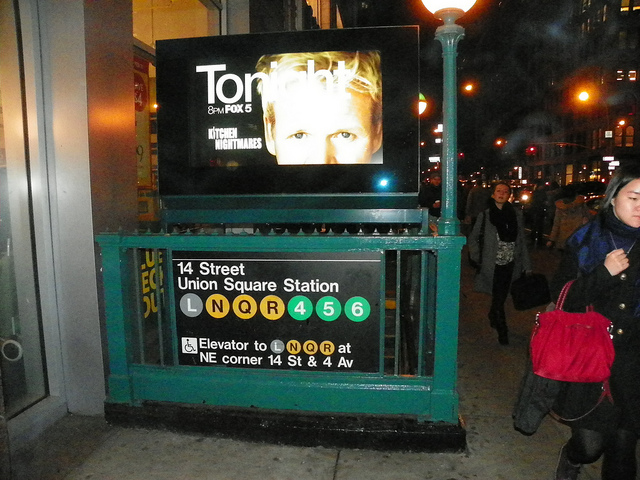 On the crowded subway platform a space had cleared around the couple. For reasons no passerby could ascertain, the expensively-dressed young man and woman—Wall Street by the cut of the suits, the fabric, the accessories—were slapping each other. Fewer of us were passing by anymore: we had stopped to watch.

Clearly the guy was holding something back, like this was all a kind of game—though his clenched jaw told the captive crowd he was having no fun, taking more care to parry his partner’s blows than to land his own. By contrast the woman was swatting hard, dead serious from the first instant I saw her, more furious now that blood was trickling from the man’s lopsidedly big upper lip. Had the ring on her finger caught him there? The gold band sent out a ruby spray as it caught him again.

Before it landed a third time, the man grabbed his companion by the wrist and licked a crimson ribbon from her fingers. Did I hear a gasp? The woman appeared winded. Yet her shock (if shock it was) immobilized her but a moment. When she slapped him with her free hand, wildly, he slapped her with his. After this hitch in the rhythm of the match, it resumed unabated.

The crack of flesh hitting flesh arced back and forth across the resonant subterranean space, above the muffled grunts of the couple, above the contained buzz of the crowd. “Shouldn’t someone call the cops?” yelled someone after a while, a cry that provided no appreciable release from increasingly unsustainable communal tension. Instead the train came and we all, even the couple, pushed aboard. In the car there was not enough space for a decent swing.

For our enhanced protection we strung concertina wire across the window frames. There was little we could do now but wait.

I’d tried (I swear to God) to get a license to carry a plain, unenhanced handgun into Sodom City, but the City (just as I prophesied it would) turned me down. Loath to violate Caesar’s law (even when Caesar’s law is unjust), I declined to exercise my rights and left all my serious arms back at home.
We started out early Sunday. After Church my wedded wife and I packed up the pick-up and drove out to the flea market, the one that sprung up at the abandoned strip mall just before the Christmas before the Christmas before last. It’s the best place I know to find fireworks—the kind that can take your hands right off if you’re not professional about it. We bought us as many as we could fit in our bags. As we drove into the City, I was wishing we could’ve fit more.

Now that we’d secured all the entrances and exits to the old State Hospital, Janie and I unloaded our stuff, said a prayer and settled in for the siege: they’d be coming to get us soon. To kill the time, I filled the water pistol I won at the Legion picnic last Independence Day, aimed at a mirror above a sink in the empty emergency room and let loose. By the time I was done, my own mother wouldn’t know me. Then I handed the gun to Janie. 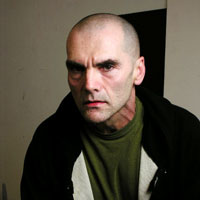 Jim Eigo is a writer living in New York City. His fiction has appeared in Likely Stories and Best American Gay Fiction #3, and periodicals such as The Chicago Reviewand Cream City Review. You can read his recent flash fiction in The Legendary #26, riverbabble 19, Word Gumbo 2,Polluto 8, SPLIT Quarterly 5 and Wordland 1. His first published art work appears in a limited edition book from Intima Press, The Poetics of Space. His work as an AIDS activist is profiled in the documentary, How to Survive a Plague, which just received an Oscar nomination.