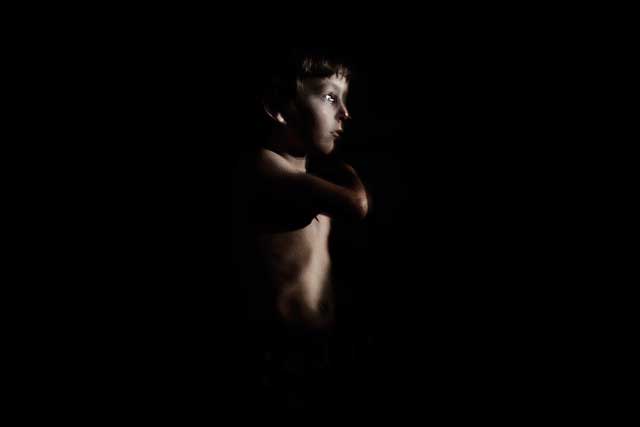 Leo is lying face up on a mattress in a walk-in closet. The entrance is missing a door so a purple wool blanket, suspended from two nails, serves as a flap that keeps out the light but not the noise. It’s late and he can hear two adults down the hall in the living room. Their heated voices are not out of the ordinary; everyone in this neighborhood talks loud and fast. But tonight the tone is different. Words trail off in snorts and huffs. He hopes everything will be fine. When an abrupt thud reverberates in the walls he jumps from bed, swipes back the flap, turns a corner and runs to the living room. The adults are wrestling and the man is winning; he’s got her pinned to the carpet between the television and the coffee table. They grin like twins when they see Leo fixed and ready, his small pink hands shaped into huge red fists. Go back to bed, says the woman. In bed there is a pitch-black dream with everyone booing or weeping at undulating decibels. He can hear the women in the world on one side of the darkness, and the men on the other. As soon as the dream repels him from sleep, he staves off nausea by not moving.

When denied access to a familiar tree, something man-made will have to do. A-frame garages in his uncle’s alley line up like opposing teams. He is lying belly down on the shingled roof of a crooked garage, head above the vertex. Backyards no bigger than two-and-a-half Cadillacs are either decorated like church pews or the pits. Trash cans wait to be kicked. Garage doors will be punched by men who mean what they say. When he spots the girl from the sign shop cutting through the alley, elevation is no longer desired because he knows she never looks up. He sidles downward on the flanks of his sneakers then drops off the eaves. He’s running before he lands but intercepts her without fanfare or words. She has ancestors buried beneath the mounds in the park on his side of the river. This is all he can think about now that she’s staring at him, that is, until teenagers exit from an unseen garage and fan across the alley. Follow me, he says. She follows him through the wind-tunneled spaces of the neighborhood. Once they reach a safe distance, he stops, but she keeps running. 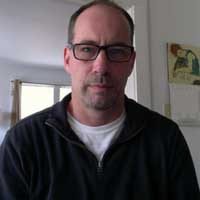 Paul Enea was born on Milwaukee’s East Side where he continues to reside. His work has appeared in Blue Canary Press, Verse Wisconsin, Porcupine, Brawler, and the chapbook anthology Portals and Piers.