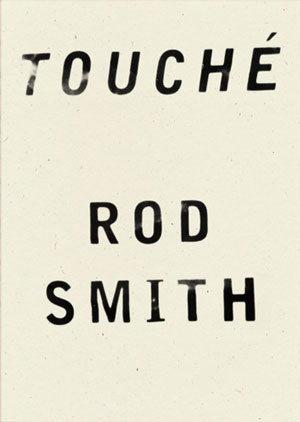 Poetry these days is unglamorous, but at least it’s fun. At most, it’s fun. Rod Smith’s Touché plays, but you would have to call it mischievous because it hits you with über grit, and not one punch is held back.

“Everything I have written is trash. I have not / even the strength to love. Let it go.” The blunt emotion of these lines is the impulse of “Buoyancy”—the cathartic moment of a tormented artist who is filled with self-hatred and guilt over his inability to love a woman more than his work, and his work at all.

The pathos is so real to me—the hapless raising-onto-pedestal of a woman—the inevitable transition to thoughts of writing: “I have to write past this obsession / with you, Nora, with an invalid / admiration in the learning. You’ve / got the idea. I’m a calf. & the victory / of the light. // Does it go on? The poem I mean.” I am pretty sure I felt this way last week. Touché, indeed. 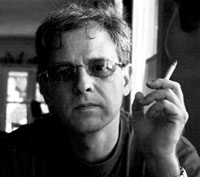 I know. I too was taught that the author died long ago in some publication by a French poet named Roland. But this death is, itself, dying, as evinced not only by Rod Smith but also by the resurgence in “real fiction.” There is a name for this self-awareness—in everything from banal reality TV to narrative journalism, and immersion journalism, and like every story I have ever read in Vice. So maybe, just for a second, let’s put all that past behind us.

The moody, embittered protagonist of Touché might be an archetype that awoke from Rod’s dreams, or a little dendrochronological slice from Rod’s history, but this reader is convinced of the reality beneath the work.

Maybe I’m too sympathetic. Maybe you won’t believe me. Here’s the second delta of my triangle. Who else but a poet would compile the lines of “Find The Job That’s Right For You,” a found poem taken from an employment listings page. Look at this: “8   Part-Time Education Program Specialist / 23     Part-Time Gallery Attendant / 69     Part-Time Program Presenter, Visitor Experience.” If you are not screaming right now, you have never been a self-employed writer.

I wish I had the courage to jump into the protagonist’s position. But for me, this poem is a reminder of my lack of faith in the academic world, my lack of faith in a society that neglects its poets. It is a warning, and an anticipation that guided me into more lucrative forms of writing. You know, the stuff that people actually pay for these days.

And the work’s ingenuity and intelligence makes it even more aggrandizing. Because talent and devotion has never been so ill-repaid. I particularly like Rod’s adjectives, which are often so intuitive as to be utterly new and unexpected, as in “The Birds of America:” “The tall / beach / & / the same / classic / certainty.” This is language organized by feeling and laid into occasional grooves of elegiac cadence. Practiced. Heartbreaking.

Rod Smith’s “protagonist” is rebellious at times and always inventive. His work digs into self-diminishing pity, and just around the corner reveals the full canvas of an owned world. There is anger. There is facetiousness, subtle innuendo and a bit of hip-hop. It is expressive and utterly Romantic while being formally contemporary.

And it is exactly what you should read if you ever get that urbanely ambivalent ennui. Because really, there is so much to feel and maybe we should? Well. Now, there’s a pill for that. And it’s on my bookshelf.