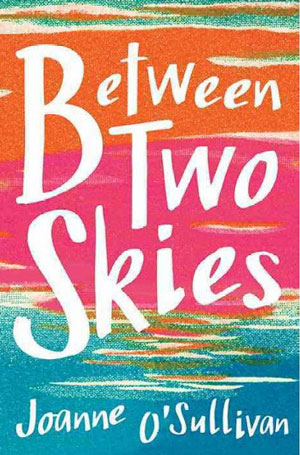 When I sat down with Joanne O’Sullivan’s Between Two Skies, I was immediately drawn to the subtle cover design; colorful yet subdued, water meeting sunset. Then the first line captivated me even more:

When I was little, my grandmother, Mamere, used to read to me from a storybook about a mermaid who lived at the bottom of an alpine lake.

From the start, O’Sullivan pulls readers in with well-crafted characters and a beautifully painted setting. She drops the reader deep into the South with Hurricane Katrina looming offshore. The opening pages saturate us with the warmth, hospitality, and food that are so true to this geographical location. But we aren’t allowed to get too comfortable. Not with the bad weather reports and the life-changing storm churning at sea.

Unlike other stories focusing on natural disasters, O’Sullivan takes our attention off of the storm, at least for a moment, and places it on a lovable character. We meet our beloved protagonist, Evangeline Riley, on the eve of her sixteenth birthday. We learn how much she loves her tiny fishing town of Bayou Perdu, nestled way down south in Louisiana along the Gulf of Mexico and how she loves being on the boat with her father, a shrimper, where she spends hours watching the birds, the sky, and the sea. Evangeline’s world becomes ours and we immediately root for her. 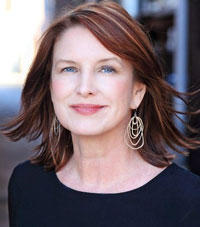 Then the storms hits. And with destruction, comes chaos.

One minute, Evangeline is arguing with her sister and managing a new crush on Tru, a Vietnamese-American musician and shrimper. The next minute, when the storm surges and stirs, she’s evacuating her beloved hometown, becoming a refugee, and moving to landlocked Atlanta. It is through this turn of events that we get to know the characters on a deeper level. A truth through pain moment. Evangeline’s sister breaks down, her parents begin fighting, and who knows if her best friend was able to escape the storm alive?

Evangeline’s calm life in her small fishing town is shattered. We see the struggles firsthand through a realistic description that makes us feel as if we’re experiencing the pain along with Evangeline’s family.

We finally get word that we can go back. Forty-eight hours to get in, inspect your property, collect what you can salvage, and get out again.

After the storm settles, Evangeline’s family receives notice that they can return to their hometown. The closer the family gets to their tiny fishing town, the more destruction they see.

There’s an eighteen-wheeler with its back wheels in a tree and the front ones on the ground. A school bus like a crumpled-up soda can. There are cows on top of the levee, alive and dead. The live ones move slowly, grazing under a blue, blue sky.

But that glimpse of blue, blue sky offers the reader hope, even before Evangeline and her family see it.

Thankfully, the story doesn’t end here. A rebuilding process is inevitable. However, the landscape may never look the same.

Between Two Skies is a beautiful and lyrical story that explores the loss and abandonment associated with one of the most historic tragedies in the United States. Instead of using broad strokes and verbose description, O’Sullivan’s gentle touch paints a unique picture of what happens to a family when their world is turned upside down due to uncontrollable circumstances.

A strange feeling comes over me­—emptiness, but not a sad one. An emptiness that is newness, that’s ready to be filled up with something else now that all that pain has come out.

This is a difficult-to-put-down, gently threaded love story with charming characters that will leave readers thinking about a family, their tiny fishing town, and Evangeline for a very long time.

Brenda Rufener is a technical writer turned novelist. She graduated from Whitman College with a degree in English and writes full time. Harper Teen/HarperCollins will publish Brenda’s debut young adult novel, WHERE I LIVE, in February 2018, with a second novel slated for 2019. Originally from Oregon, Brenda currently lives in North Carolina’s capital city with her husband and two daughters.