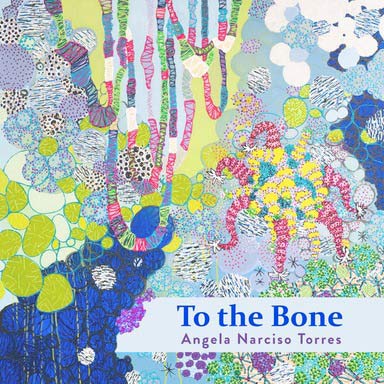 To The Bone is a book about the particular sort of remembering that accompanies losing a parent to Alzheimer’s. The poet’s mother is brought tenuously, haltingly, on the page. A sense of slippage is accomplished through layering, repetitions, and fluctuating temporality to reveal how a disease of memory appears to the mind struggling to find shore in presence.

“If you go to bed hungry, your soul will get up and steal cold rice from the pot.” So begins the first line of “If You Go To Bed Hungry”, a series of adages and if-then statements, the superstitions handed along by a mother, which establish place as memory, itself, or the act of remembering.

The next poem, “Sundawning”, is dedicated directly to her mother, Carmen. Here we enter the recurring sensory themes and motifs: the piano music, the scent of “guava and rust”, the mother’s hands on the piano, her voice singing kundimans. Pacing isn’t so set so much but stanza-length or white space but through the use and repetition of certain verbs, and this sort of verbed breath-making sets Torres’ poetic voice apart.

The use of italics to offset the mother’s words renders them stable, set apart from the unreliable shifting text. There is a sense in which italics also hallow these words like a song refrain; the italics tell us what to remember:

The sweetest meat clings—
she insists. Peels a mango.
Amber rivers training her elbows.
A trail of L’Air Du Temps wafts
in her wake.

The perfume, translated as Air of Time, and various scents, act as anchors through which the mother is held in place. Scent is our most animal memory, our strongest connection, our pheromonic drive, an elemental and intimate way of knowing, and Torres returns to certain scents as if to draw more from them.

Rosaries are recurrent motifs, whether in dreams (see “Sundowning”) or in the title, the frame itself, as in “Self-Portrait With Rosary Beads”:

I am olive wood,
carmelian, plastic, black onyx. Am rosebuds
pressed into fragrant spheres. Your heat
is my mask; your worry, my fire. Pick
your mystery.

Time, space, and personhood blur; the point of view is somewhere outside the narrator, in the air between daughter and mother. We see this in “The Immigrant Visits Her Mother,” a long stanza with tiny twists after enjambments, and the emptiness that seeks the italics of the mother’s voice–the one that was real. Insofar as Alzheimer’s asks one to recreate the absent mother, to fill the vessel they’d abandoned, the poem is an act of preservation that crumbles as it proceeds.

Even when using first-person, Torres rarely inserts herself into the poems; she is there as an archivist, a witness, a keeper of memories. There are multiple I’s. “Narrow Bed” is heartbreaking in its gaps, its chunks of white space, its details–a still-damp blue robe, “a narrow bed” in a row of narrow beds, “chenille slippers”, and “why am I here“–that existential question which acquires a different valence in the context of a disremembered life. This question is worse, somehow, in the mouth of amnesia, in the unmoored self.

Torres offers piano music as a language that hasn’t been lost between mother and daughter. In “Fugue and Prelude,” music serves as a metaphysical metronome, keeping time between the then of childhood and the now. The narrator marks time as “decades of preludes ahead”. In “What I Learned This Week”, the taut tercets circle the question of time–what time is, what it means to know in time:

……..Some say music memory
is the last to go. Still, I have no windfalls

for the empty baskets of my mother’s eyes.
When I returned from Manila, the peonies I’d left

in half-blossom were stunted by spring storms.
A bud that will not bloom is called a bullet.

Pain is carried in blossoms and botanical elisions. In this way, loss is personalized without the poet claiming it.

In “Recuerdo A Mi Madre”, the narrator watches her mother sleep when she was still intensely inhabited, still herself” as recognized by others. The poet continues:

my mother requires
the patience of a miner

carving amethyst from rock.
To know my mother

is to memorize
a labyrinth of longing.

Again there is “her guava scent” accompanied by piano music, “prayer and dirge”, and the longing, named this time, as labyrinth. There is no motion forward, only a circling with no relief or reprieve. There is no kenosis, no spiritual revelation–just the slow theft which becomes part of the seam of things. 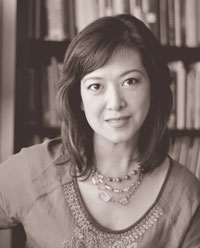 Torres grapples with difficult questions by using botanical and entomological metaphors as a sort of counterpoint to carry the weight. I loved “The Abscission Layer’s form–a diptych in two-columns, one column constructed of words from an encyclopedia article on leaf layers, the other column a loose collage of words from diagnosis, folk remedies, “the jagged calligraphy of twigs”. I read it vertically and horizontally several times, and found new things in each layer of this leafing. “Some Uses of Friction” approaches the issue of assisted living and her mother’s care by using data about insects, building a metaphor from cricket wings, to inhabit, rather than resolve, insoluble tension.

“Self-Portrait As Revision”, an anaphora of “I am” statements, offers the most exposed view of the narrator. The “I am” sets out a solid presence, a voice which can be held accountable, an active being rather than one who is acted upon. Since Alzheimer’s is a story of helplessness for all parties, and there is no bystander–no one who is not a victim– I value this poem’s attempt to speak for the poet, and how it shifts directly into “Sea Psalm”, which addresses a god in psalm form, both visually and lyrically. “Let me begin again, Lord.” In this revision, however, the poet returns to a reliance on something outside the self, a note of supplication.

The poet continues reaching towards her mother in “Pearl Diving”, a list poem in eight sections, through kundimans and rosaries. There is an image that haunts me in this poem–an image of the mother’s hands praying an “invisible” rosary, running her fingers along beads in the air. And “What Happens Is Neither” beginning nor ending. The loss continues in the land of remembering the mother whose memory no longer includes her husband.

There is no resolution, no revelation, no final reckoning. “Trees know best the now of things,” the poet says in the book’s final stanza. In the slight inversions of syntax, the use of botanical certainties, the absence of an inhabited, stable narrator, Torres leaves us with the mother’s words lined up like rosary beads to fondle again, again. It is difficult to write loss in Alzheimer’s without losing the integrity of the subject, and I admire Torres’ skill in keeping love entire without minimizing the cruelty of diseases which attack memory. 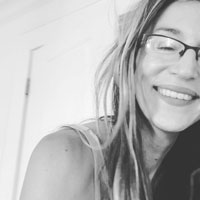 Alina Stefanescu was born in Romania and lives in Birmingham, Alabama. Her writing can be found in diverse journals, including Prairie Schooner, North American Review, FLOCK, Southern Humanities Review, Crab Creek Review, Up the Staircase Quarterly, Virga, Whale Road Review, and others.  More online at www.alinastefanescuwriter.com or @aliner.