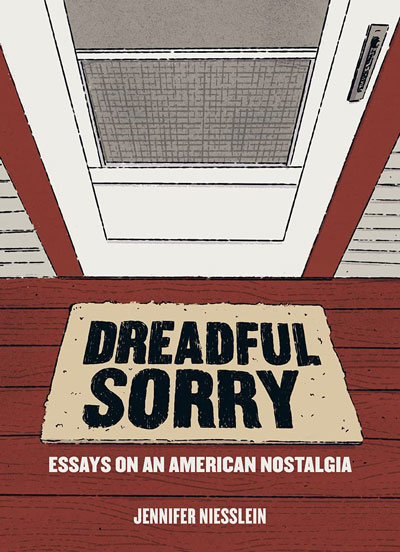 I have been reading Jennifer Niesslein’s new collection of essays—Dreadful Sorry: Essays on an American Nostalgia—on a suddenly warm February afternoon. Outside on the deck I sit, the white stones of a fire pit glowing by my feet, the neighborhood kids riding their remarkably loud vehicles up and down and up and down the nearest driveway. Somewhere in Russia, Vladimir Putin is addressing his people with a long list of grievances. He is stamping his figurative foot, wishing for a yester-year, a yester-century, even. And because Putin wants what so long ago was, there are nearly 200,000 troops massed on the Ukrainian border.

What is this thing, nostalgia? What does the word rightly mean? What is it good for, and what good might it do? Those are the questions that set into motion the true stories at the heart of this thoughtful and thought-provoking collection.

To Niesslein, who previously authored the memoir Practically Perfect in Every Way and is the editor of Full Grown People (full disclosure: I have been a lucky writer in her pages), nostalgia is, well, complicated: “ … by definition,” she writes, “nostalgia is regressive, backward-looking. Both personally and societally, nostalgia challenges the validity of memories of those who recall events differently.” Nostalgia, she continues “has the ability to unite us on a wider scale, too—but it can also be downright dangerous, depending on what we unite for.” 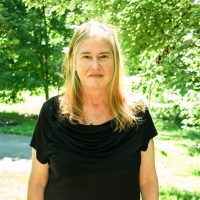 Niesslein is a nuanced thinker, and she honors the tremendous complexity of nostalgia in the nine essays contained within this book. “Before We Were Good White,” for example, is a reckoning with a family’s history—an ancestor’s jail time and eyebrow-raising death and the silence that has accompanied that tale across time. Having set out to make some sense of this past, Niesslein pulls up short: “What I found out was that I’m so far removed from the underclass—by my own foremothers’ design—that I took for granted that her suspicious death would warrant the kind of investigation that mine presumably would.” Nostalgia, in this essay, is a wanting to know. The reality, however, is that this particular past, at least, will buck nostalgia’s desire and refuse to reveal itself.

In the essay “Hospitality,” Niesslein finds herself at the Homestead, a Virginia resort, among those who would like to turn back time. “What is the Homestead’s nostalgic draw except as a place where human rights were abused in the name of luxury?” she asks. “Similarly, what is ‘Make America Great Again’ except nostalgia for a time when many Americans didn’t have the rights they do now?” This Homestead resonates with nostalgic trouble, and Niesslein puts us deep inside the discomfort.

We twined our lives together. We stood together outside the hospital room door and heard the first cries of our oldest nephew after his birth. We took cheap vacations to off-season Chincoteague, using our last ten in cash to cross the Chesapeake Bay Bridge Tunnel. We stayed up late waiting for the other to get off shift waiting tables or tending bar. One summer day, we skipped work to go hiking at Sugar Hollow. It was a ways out of town and we drove with the windows open and the music pouring from the speakers. We found an easy, sun-dappled trail that led through some streams, and we walked the gentle incline, bumping into each other just as an excuse to touch skin. We took pictures of each other posing on a rock that lay just beneath the surface of the water, an optical illusion of levitation.

What, Niesslein wonders, in her final essay, is she to do with her nostalgia—this woman who is warmed by the background glance, this woman who cares very much about the fate of the world in this moment. I won’t spoil the pleasure you will take in these collected essays by sharing with you her final words. Trust me that she lands in an interesting place, a place that asks us to think about the past we are creating right now.

Beth Kephart is the award-winning author of three-dozen books in multiple genres, a teacher of memoir at the University of Pennsylvania, a widely published essayist, and a book artist. Her new books are Wife | Daughter | Self: A Memoir in Essays and We Are the Words: The Master Memoir Class. More at bethkephartbooks.com and https://www.etsy.com/shop/BINDbyBIND.