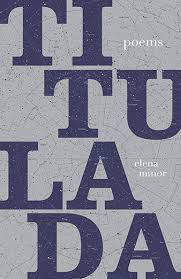 From its first pages, Elena Minor’s TITULADA announces its commitment to experimentation and resistance to easy characterization in a single poetic or linguistic category. English is invaded by Spanish, typical grammar and punctuation are dispossessed by mathematical symbols, poetry itself is invaded by prose and even drama. Readers enter these poems with trepidation, uncertain of where the floor will fall out from underneath them, but that not knowing, the discomfort with which we read these poems is a crucial part of the immense pleasure of reading them.

Minor’s dedication is “For all those upon whose shoulders I stand” and these poems certainly owe much, visually and typographically speaking, to e.e. cummings. But where cummings mainly broke up words and messed with punctuation for visual effect, Minor’s additions, subtractions, and radical indentations suggest what is linguistically possible with even infinitesimal changes. In “Low and Slow to Taste,” the first prose poem in the collection, Minor uses brackets to suggest alternate readings and other possibilities:

These elements are essences such as have no mor[t]ality. They [they] neither have color nor tenor nor faith so they [they] can’t conceive of the future: they [they] have been or are, weathered…Your will is mine [ours].

The first use of the brackets in “mor[t]ality” suggests two possible words, both of which function the same way syntactically but are different semantically. They [they], are not at all different syntactically or semantically, but there is nevertheless an element of difference suggested, especially since it comes after the “mor[t]ality” edit — we read difference and discord even if, linguistically, there is none. “Your will is mine [ours]” is an opening of possibility and ownership, with the simple implied expansion of a singular to a plural possessive pronoun. 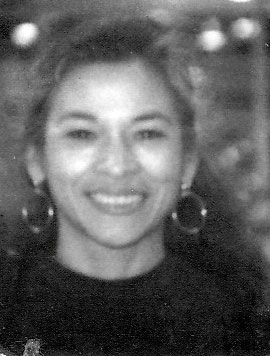 Brackets or parentheses normally indicate something that could be omitted but has been left in for explanation. Minor’s brackets suggest possibility, alternative, and more often addition instead of subtraction. This process is especially apparent in the title poem, in which all of the brackets used are a “she” pronoun and an action: asked, said, told, states, calls. Grammatically speaking, “she asked” or “she said” could be omitted, and the line can be read without the bracketed phrase and still make perfect syntactic sense. However, by bracketing those phrases, Minor multiplies the instances of the “she” subject throughout the poem, thus returning agency to this person the poem purports to be about, giving “her” actions instead of letting the poem happen around her.

Minor’s linguistic cartwheeling also serves to emphatically resist normal conventions of reading. When interlinear or interverbal typographical interruptions occur, we have to forget about left-to-right reading — instead, we back up mid-word and reread, the line suddenly veering off in an entirely new direction. Minor introduces this condition for reading in the first poem, “Apellido,” most powerfully in the line

… from father’s fine-grind bones and nourishment through
mothers’ s[our]ed milk.

The bracketed alternative loops us back to “soured” and “our,” and makes us think of how those two might work in tandem or drive each other apart. Minor needs to look no further than inside her own words to suggest changes, alternatives, and hidden potential energy in language. She is also resisting the convention that what readers see on the page is the edited, completed poem — instead, she has left the process of composition on the page, or at least the poet’s process of entertaining other words or meanings. It’s as if as we read, we come to a fork and instead of choosing one direction for readers to take, she has left both paths open to us.

What I found most compelling about the resistance to stability in these poems was how that instability highlighted fundamental failure of language and communication, despite all the linguistic and typographical tools we have at our disposal. Minor uses both English and Spanish, often in the same poem but never in balance, and one illustrates the shortcomings of the other or exposes the difficulty of existing bilingually. In “Interstitial 0.2,” for example, the first line of each couplet in English is followed by an offset “me dijo,” (he told me):

Empty air has its own mechanism, me dijo.
Its gears accord to whim.

The disconnect suggested in this poem is twofold: firstly because the English lines are grammatically and semantically dense and difficult to untangle, and secondly because there is a divide between what is said in English and how it is told that it has been said, which is in Spanish. Did the “he” tell the speaker in English or Spanish? The answer to that question spawns two more: at what point did that translation occur, and what was lost along the way?

Minor’s collection poses far more questions than it answers, but we should be asking questions of our language, our conventions of communication, and our poetics. Minor’s poems ultimately assert that communication, above all else, is difficult work, and sometimes a bit of linguistic and typographic experimentation will go a long way in reminding us just how hard it is to speak, to read, and to listen.