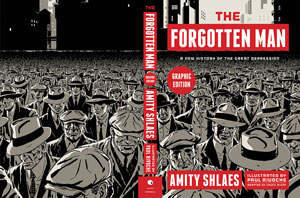 The new graphic novel edition of Amity Shlaes’s The Forgotten Man, illustrated by Paul Rivoche, is a thorough historical account of America during the Great Depression years. From the starkly illustrated cover of the masses—grim faced men with shadows for eyes, in a sea of Stetson wearing unfortunates—to the beautifully rendered illustrative black and white style on each page, this book is a visual treat. Spanning from 1927 to 1940, Shlaes is able to cover a wide swath of economic and cultural changes. While the crux of the book is “the Forgotten Man,”  the working class men and women who thrive or suffer depending on how the government is able to deal with the economy in light of recent disasters, this book is about historical change and how the U.S. ultimately gets out of the Depression. 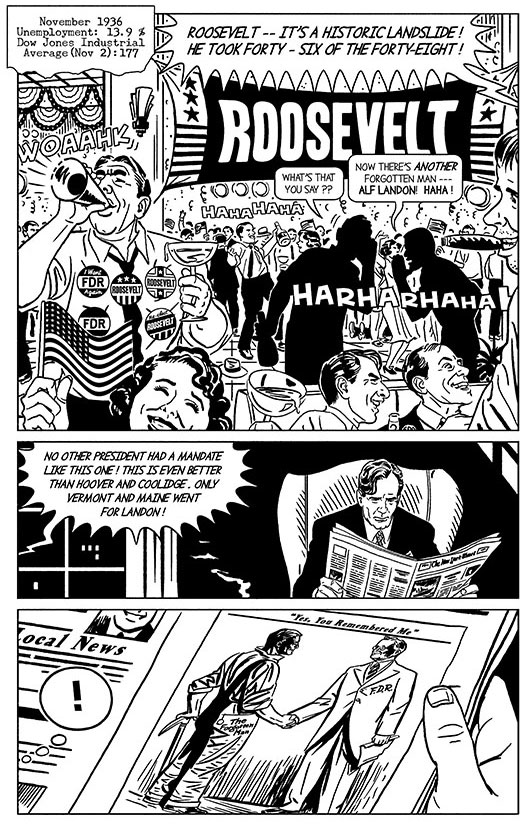 Rivoche’s panels are drawn with simple yet carefully detailed scenes. His characters either evoke this general period of history or are specifically recognizable for their significance in this era. Narrated by Wendell Lewis Willkie, The Forgotten Man begins with his excited foray into the utilities industry and the optimistic attitude that electricity would “energize” the country. The opportunities of America as presented to the workingman—native and immigrant alike—often differ from the realities that they face on a daily basis. Willkie tells the tale with the Forgotten Man as the fulcrum of the drama that unfolds on a local and international level. Politicians, bankers, professors, dictators, and revolutionaries all feature as characters in the greater story of how the U.S. recovered from the Depression. 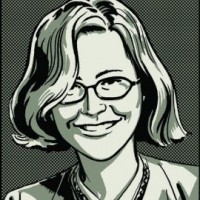 Shlaes does a beautiful job of weaving an overarching political narrative with what is happening on the ground. Scenes of conversations with the president and labor leaders are interspersed with scenes depicting how people are affected by these decisions. The Forgotten Man—“The man who pays, the man who prays, the man who is never thought of”—is the fodder that keeps both the government in business and business afloat.  This a progressive tale that operates on a linear time line and, as graphic narrative, succeeds in articulating a series of events that are precipitated by or engaged with other events. The opening pages show the stark conditions of men starving in city streets “four years into the New Deal,” in 1932. Henry Willkie sets up the story by asking how America got to that point of struggle. Each chapter is marked with a yearly date, the unemployment rate of that period, and the Dow Jones Industrial Average. The audience witnesses the desperation of the average American, a general disillusionment with the current capitalist system, and a serious inquiry into Soviet communism as it develops in Russia. And while the economy and society are not at their most robust in America, drawing a comparison to Russia and Germany highlights the privilege America still enjoys and the character it possesses that propels it as a nation into World War II. 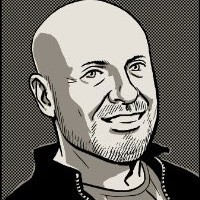 Throughout The Forgotten Man, major events are illustrated and retold with their players, both high and low, featured. When Shlaes outlines the flood of 1927 or the Stock Market crash of 1929, he shows how the people affected by those events fare, while politicians and businessmen fight to either restructure and fix these issues for their people’s benefit or for their own survival. As a graphic narrative and essential historical read, The Forgotten Man succeeds. The look and feel of the art compliments the text as a tour of America during the Great Depression. Shlaes has done her homework – the addendum includes a comprehensive timeline spanning the Hoover, Coolidge, and Roosevelt presidencies, as well as a cast of characters with biographical info. The Forgotten Man is a thoroughly enjoyable read and stands out as a graphic triumph in history.