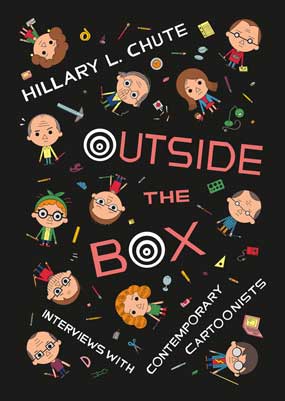 OUTSIDE THE BOX: INTERVIEWS WITH CONTEMPORARY CARTOONISTS
By Hillary L. Chute
University of Chicago Press, 272 Pages

Outside the Box: Interviews with Contemporary Cartoonists by Hillary Chute contains interviews with Scott McCloud, Charles Burns, Lynda Barry, Aline Kominsky-Crumb, Daniel Clowes, Phoebe Gloeckner, Joe Sacco, Alison Bechdel, Françoise Mouly, Adrian Tomine, Art Spiegelman and Chris Ware. If you know comics you’ll recognize this as the auteur scene, and if you don’t you’ve just been given your starter syllabus. Many of these interviews appeared before, especially in Believer magazine, but those have been expanded, and several others are appearing for the first time in print. It is a valuable record of some of the industry’s greatest talents contemplating their work, their influences, and comics culture at large.

There is some precedent for such a collection, such as Todd Hignite’s In the Studio: Visits with Contemporary Cartoonists (2007), which interviewed many of the same artists. That work, as its title suggests, was more about the creative process, and Hignite was mostly interested in the physical details of draftsmanship. Chute, a professor of English at the University of Chicago, is possibly the world’s only full-time graphic novel scholar, so approaches her interviewees with a wider range of subjects. The result is a less focused volume than Hignite’s but allows for, say, Tomine’s interesting accounts of dealing with race in his work, or the inclusion of Mouly, who, while not a creator of comics, has been central to the growth of comics culture over the past generation.

No one is better poised for such a project than Chute. She edited Spiegelman’s MetaMaus, and co-taught a course on comics and autobiography with Bechdel. But more importantly, Chute is one of the best writers we have on comics. Her first book, Graphic Women: Life Narrative and Contemporary Comics (2010), as well as articles in academic journals like PMLA and Modern Fiction Studies, are models of comics reading and criticism.

Chute is unobstrusive with her questions, and often the simplest ones lead to the richest (and longest) meditations. Lynda Barry delivers a wonderful, Gertrude Stein-esque ramble on what numbers look like, all prompted by Chute’s short remark, “Yes, the book has a questioning mode.”  It helps that most of these artists are veterans who have had ample time to contemplate their medium. 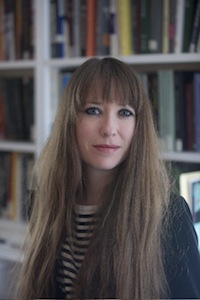 One theme that many artists return to is that of physicality and print culture. (Kinko’s gets its own line in the index.) Several interviewees speculate that the increase in serious attention given to comics is the result of the virtualization of so much of today’s media, so that a heavy, thick-papered book cuts against the grain of contemporary culture and compensates for a lost connection to physical objects. While McCloud is bullish on web comics and dismisses the paper attachment as a “fetish,” most of the other artists relate their unwillingness to imagine their work independent of paper. This inevitably leads to a culture of nostalgia, visible in the work of Barry and Ware (and if we draw farther afield, artists like Ben Katchor or Seth). And while Tomine laments that “there’s almost a cultural stereotype of the nostalgic cartoonist guy, and you don’t want to play into it too much,” he must know he is doing a poor job of it during his interview, where he defends his decision, unique amongst the interviewees, to put out his work as separate issues initially available only at comic book stores. Clowes, by contrast, regrets publishing his great work The Death Ray as a comic and now only does work straight to book form.

A related issue is the long and painstaking process of creating a comic that is so out of step with the instantaneousness of social media. Sacco, a comics journalist, is the most salient example here: he went to Bosnia in 1995, and the result was the impressive Safe Area Gorazde…published in 2000. For a culture habituated to a continuous feed of information, his creative process reads like a geeky form of sadomasochism. But Sacco’s work—he signs and dates every page—never lets us forget how his source material has been manipulated and formed, and reminds us that we misuse the term “immediate” to refer to the fast speed of new kinds of mediation.

With the exception of Mouly, all of these interviewees are artists who write, or writers who draw. This is auteur tradition, as opposed to the collaborative work that is standard at Marvel or D.C. It’s this attention to literary, often autobiographical work that has drawn some negative attention to Chute, since it taps into some unease over what the comics canon is going to look like. Chute’s success has made her a target for critics—mostly male—who accuse her of snubbing genre comics, especially superhero comics. Some of the comments you can find on academic chat boards are so strident in their misogyny you wonder if it’s parody—one poster lists his favorite critics and writes, “No Chute here!” Does he know he’s supposed to be writing academic discourse and not a sign for his boys club that meets in a treehouse? The fact that a woman has earned alpha dog status is not sitting well with an audience who turned to comics in the first place because of their issues with girls. (I speak from personal authority.)

Sexism aside, Chute takes seriously the issue of canon creation, and even includes, in her introduction, some passages verbatim from an exchange she had in PMLA, in which she defended her work against charges of elitism. While it may seem like a paradox to be an elitist comics scholar, Chute has displayed little interest in superheroes throughout her career, and Outside the Box has no Alan Moore, Frank Miller or Grant Morrison. Chute makes clear her preferred genealogy: “The underground comics community of artists and publishers was, in large part, the genesis of contemporary comics,” and “I am more interested…in the single vision of the auteur of fiction or nonfiction comics.” However, this is not to preclude or circumscribe what scholars should be writing about: she states her desire “for more, not fewer, conversations about comics…with many kinds of perspectives and objects of analysis.” Most scholars do not have to defend themselves like this—if you write on James Joyce, no one asks what you have against crime fiction—but such debates are inevitable as comics scholarship grows up (even as some individual scholars refuse to do so). Quality works like this will ultimately be to everyone’s benefit—readers, scholars and artists alike.

Seamus O’Malley is an English Lecturer at Stern College for Women, Yeshiva University. He received his Ph.D. from the CUNY Graduate Center. He has published on W.B. Yeats, Ford Madox Ford, Rebecca West, Robert Louis Stevenson, Frank McGuinness, Edmund Wilson, and Alan Moore. His book Making History New: Modernism and Historical Narrative will be published by Oxford University Press in the fall of 2014.