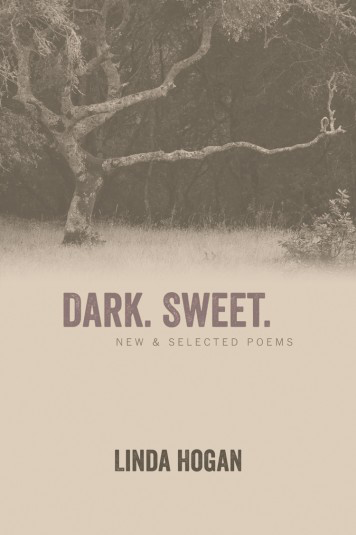 Opening Linda Hogan’s Dark. Sweet. is like coming upon the entrance to a dark cave and striking a match to find the interior covered in Paleolithic paintings. Her imagery is primordial—simple, direct representations of the natural world that recur throughout her poetry to tell and retell the history and oral stories of the Chickasaw, her own personal history, and her concerns for the present. The same images are reused and recast with each poem, accumulating new layers of meaning as her writing progresses from the late ’70s to the present day. The reader is steeped in her distinct personal symbology—a poetic world bursting with animal and plant life, ubiquitous water and sky, fragmented bodies, houses, and cities, and glimpses of tribal communities against the antithetical contemporary American society.

Also like entering a Paleolithic cave, reading Hogan’s poetry is like uncovering a record of a lost world—a world that exists in the memory of the poet, in her personal and cultural history, but also in the cultural history of America and the dark recesses of our collective unconscious. It is a faded and fragmented record the past, the fossilized shell from which our contemporary society has emerged but can neither recover nor completely shed. Hogan’s poetry, though heavily tinged with the despondency of loss, resists the complete annihilation of this continually threatened world in the desire to recover and retain its stories—to keep it alive, if only in the mind, through the preservation of memories. Her poetry attempts to preserve a sense of identity or community when the physical space of those formative places and experiences has been stolen or destroyed and the memories have become increasingly distant. What she describes is the experience of homelessness and alienation in its many forms—physical, psychic, and spiritual—and the desire to reconnect with nature and humanity in a world of increasing isolation and environmental devastation. Thus the scope of her poetic force reaches far beyond the pain of her past, into the collective pain of the present and our anxieties for the future. 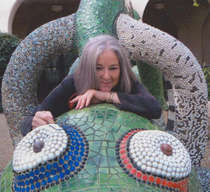 One of Hogan’s most frequently recurring images—and perhaps the most emblematic of her concerns—is the turtle. The anthology begins with a poem titled “Turtle,” and with the opening line, “I’m dreaming the old turtle back,” which progresses into a vision of humans, “The shells…on our backs”. The turtle is an obvious yet powerful symbol—it’s the animal with the house that walks, its home, its source of shelter and protection, not only ever-present but an integral part of its physiognomy. The image of the turtle is juxtaposed with the homelessness so deeply rooted in Hogan’s Chickasaw heritage, as she states, “From my family I have learned the secrets / of never having a home”. Considering the anatomy of a turtle, this juxtaposition is particularly violent and affective—the loss of the home becomes akin to losing a part of the self, and the desire to recover the home becomes the desire to recover that severed part of the self, to become whole.

The symbolism of the shell, or lack of shell, recurs throughout Hogan’s poetry, not only in the form of the animal shell, but the fragmented body or destroyed house. In these images perhaps the symbolism is more Cartesian: the shell without its living organism, the body without a heart or soul, the house without human life—are all violent images of the splitting of life from its physical vessel, of vulnerable beings wandering apart from their empty, dead slough, of alienation from the physical world which should be an extension of the self. The body and the environment are intimately connected as versions of home—fragmented and destroyed, they leave us broken and aching for reunification:

Ask me if you can die from a broken heart
and I will tell you, Yes,
if I could speak that word.
If they ask can you die from broken land
I would also say, Yes.

Hogan—whose language is clear, direct, pellucid—addresses homelessness and alienation not only through symbols and imagery, but through narrative, integrating both historical and personal stories and their emotional repercussions. It’s in these narratives that she makes clear her frustration with and antagonism against a society in which land and work—and everything encompassed in these spheres, i.e.: cultivating land, constructing houses, building communities—are not a necessity of existence, not a means of becoming whole by connecting with the world around us, but a means to power.

In early morning
I forget I’m in this world
with crooked chiefs
who make federal deals.

In the first light
I remember who rewards me for living
not bosses
but singing birds and blue sky.

She locates here the fault in the value system dictated by our current culture and economy—valuing monetary and political power, viewing work and land as only a means to that power—and attempts to reorder the system, placing the value of life above all else.

In a particularly heart-wrenching section of the anthology, Indios, Hogan expands on homelessness as it relates to both her cultural history and feminism, adapting the Greek tragedy of Medea as the tragedy of the Chickasaw woman who marries a white man, helping him gain access to land before he deserts her for a white woman and their mixed-race children are stoned to death. Here, again, the symbolism of the shell is evoked—the woman removed from the home, the home removed from her people, the woman emptied of parts of herself; and more than that, the woman and land as commodity, as a means to property, wealth, and power:

How many women have been criminals for love?
So many I could name. They fill this place . . .
All of us equal in here,
This house of the broken.
What I did for my husband,
I gave him all a man could desire.
He, who married me only for our land, our trees.
I helped him stake a claim to my people’s world.
If I could do it over
I would never have gone away
With the thief of human hearts.

Despite the pain, loss, and frustration that percolate through her poetry, what’s so remarkable about Dark. Sweet. is the palpable optimism and unceasing call to change. This is a poet deeply in love with humanity and the natural world, who projects a hopeful vision of the future—one in which our capacity for empathy and compassion will be recovered, in which we will overcome our fragmented associations with humanity and the world around us in which people and land are merely a means to an end, either useful or disposable in the accumulation of wealth and power. Hogan’s poetry is hopeful that by reconnecting with the whole body, the whole person, the whole earth, it is possible to overcome the pain of homelessness—to become, perhaps, like the turtle. She asks, in the final poem:

How far do we have to go, how far is it
to the holy springs, the first water,
the first bone of our creation,
to compassion for all in that beginning
human marrow?

In our present society—wrought with the alienating affects of capitalism, urbanization, gentrification, and environmental degradation—this is not a question to take lightly.