QUIET CREATURE ON THE CORNER 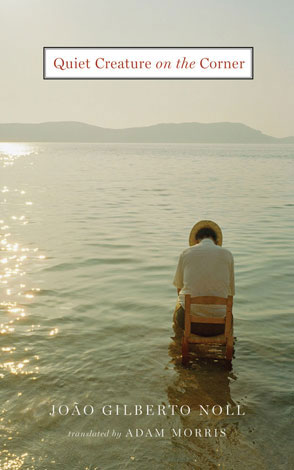 Though João Gilberto Noll has published nearly twenty books, Quiet Creature on the Corner is his first to be translated into English (by the talented Dr. Adam Morris). A five-time recipient of Brazil’s prestigious Prêmio Jabuti, Noll lives in Porto Alegre, which also happens to be the hometown of Quiet Creature’s narrator—an unemployed poet who finds himself in jail for raping his young neighbor, Mariana.

But then, in a bizarre sequence of events, the poet is soon removed from jail and carted to the Almanova Clinic before then being moved yet again, this time to the mysterious household of Kurt, a German Brazilian, for whom the classic laws of life—time, money, aging, purpose, etc.—no longer seem to apply. As the poet slowly realizes:

A period had passed since the day Kurt brought me to be with him, and now there was no denying it: this period had been longer than I had supposed.

And I wondered, a wave of goosebumps passing over the flesh of my scalp: Why this lapse in recognizing such a duration?

Quiet Creature in the Corner is about memory and forgetting, allowing yourself to become so lost that you no longer have a home or self to return to. In this state, the poet no longer feels responsible for his aging, lonely mother, for others he’s hurt, for the crimes he’s committed, for the pain and hunger that wait in the streets just outside his door. —And it’s these classic themes and conflicts that ground Quiet Creature within its surprisingly intense levels of satire and magical realism.

In his room at Kurt’s home, the poet hangs up an old engraving that he took from the maid Amália’s shed (the same shed where he goes to secretly have sex with her each day). It shows a boat setting sail, an image that prompts Kurt to say, “That engraving evokes, with impressive realism, a farewell to one’s homeland.” The engraving thus becomes the poet’s rather literal writing on the wall. It is the crystallization of all he has left behind in exchange for the soul-mushing comforts of his new reality. And it is this same wholehearted avoidance and denial of all things uncomfortable, all things itchy, unhappy, or difficult, that the poet continues rolling with throughout the entire novel:

I was afraid [Amália] was pregnant, but my dread lasted only a second, and then I returned to sucking and biting her two breasts, because I remembered it had been a long time since I came inside her, so I could keep on sucking and biting her two breasts with peace of mind … and suddenly Amália let out a yell, and shouted, murderer, murderer, twice, and I, who was wrapped in her arms, got up, took her hand, and saw deep in her eyes a sign of alarm, but concluded that I didn’t feel like deciphering it.

It isn’t until he’s faced with Kurt’s dying wife, Gerda, in her hospital room, that the poet finally begins to wonder if perhaps his current situation isn’t as comfortable as he’d first imagined:

Wouldn’t it be better to leave the room and try to forget about the existence of Kurt and Gerda, and find some less blind situation, one as clear as my hand, which opened like a fan in front of the lampshade, my fingers the succinct verses I’d like to have?

And there’s the rub. Blindness. For writers and poets, there are few artistic tools so vital as having sight, as having memory and clarity. As being present in one’s own life. In Quiet Creature we’re faced with the grotesquerie of a poet’s life as it’s drained of all memory, place, and presence. In a life free of worries about money and responsibility, the poet finds himself suddenly absent all ability to write–all the things that once made him himself.