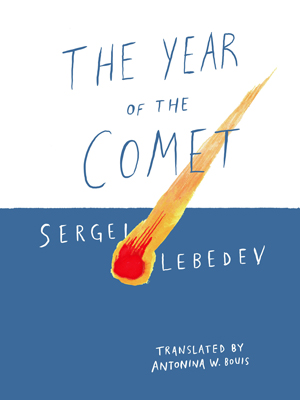 The unnamed narrator of The Year of the Comet is born the moment an earthquake strikes Moscow. “The earthquake was my first impression of being: the world was revealed to me as instability, shakiness, the wobbliness of foundations.” Therefore, he observes, “My feelings, my ability to feel, were fashioned by that underground blow. I had trouble understanding anything to do with stability, immutability, and firmness, even though I wanted those states I could not achieve; disharmony was closer and more understandable than harmony.”

And so we enter the world of The Year of the Comet, the second novel from Sergei Lebedev. That we begin with an earthquake is fitting for Sergei Lebedev, who worked for years on geological expeditions. Lebedev’s first novel, Oblivion, a critically acclaimed Wall Street Journal Best Book of 2016 also translated by Antonina W. Bouis, similarly explores a strong connection between man and land.

The narrator spends his childhood shuttled between two grandmothers who see him as the legacy of all of their lost loved ones, an amalgamation of parts of long-gone brothers and cousins and husbands. He becomes himself and also not himself. Lebedev’s choice to leave the narrator unnamed underscores a search for identity and purpose that permeates the entire novel and that reflects the dehumanizing influence of the State.

In the wake of the Civil War, famine, and World War II, whole swathes of the narrator’s personal family history are lost, seen only in snatches from photographs and left-behind objects. In the silences of untold stories and missing people, he feels that there are always things being hidden from him, secret signs that will direct his life or give him some deep insight if only he can uncover them. He is constantly searching, bestowing profundity on found objects and words. In the same way, he creates his own stories of his family’s past, trying to situate his place within them and within the Soviet Union. In this construction of history, the narrator reflects, he mirrors the USSR itself:

The USSR, continually editing and reshaping its mythological past, was essentially a matryoshka doll of images and myths that sprouted from one into another; some formed cause-and effect connections, others were pushed aside; inside each construction you could endlessly search for the truth, accepting the legends of the previous era which became the ‘real past’ by virtue of seniority. You could climb into a pit, descending deeper and deeper, without realizing that the entire construction was artificial; that was why you didn’t know where to put the spaces of silence, areas that were forced outside the limits of the Soviet universe.

The formative year, when Haley’s comet returns, comes in 1986. His grandmother shows him a drawing of herself as a little girl with the comet overhead and he asks her when the comet came last, eventually calculating that it came in 1910.

“You’re right,” she said with a smile. “You figured it correctly. World War I started four years later. Back then everyone thought that the comet was an omen of great misfortune, and so it was. Of course, then came the revolution,” Grandmother went on, correcting herself. “And the revolution made people joyful.”

He is shocked to realize that his grandmother existed before 1917, before the October Revolution that led to the creation of the USSR. It is then that he begins to peek outside the temporal and cultural borders that form the USSR.

It is also 1986 that a serial killer known as “Mister” is on the loose, dumping the bodies of children in places where he should have been noticed. The fact that he is not leads the police to speculate that Mister is unrecognizable because he blends in with the crowd, “a simple good Soviet man.” In the narrator’s imagination, however, this fact becomes magnified. Mister becomes “more Soviet than any Soviet man…an invader from the world beyond who preached the destruction of the Soviet Union, living only for hatred of the USSR.” The narrator becomes convinced that his destiny, his very purpose in life, is to sacrifice himself to Mister, to give the detectives a sign that would lead to his capture, and in doing so, can take his place in history as a hero. “I was delighted by the correspondence of my plan with the Soviet faith in which I was brought up, which considered sacrifice the highest and noblest act.”

When he finally comes face-to-face to Mister, he realizes that Mister is nothing like how he imagined. “The evil was real, my fantasies about the saboteur were not.”

In the aftermath, the narrator is able to look beyond his own made-up stories and begin to face reality as it truly is, as the first rumblings of turmoil tremble across the land. Five years after this formative year, in 1991, would come the collapse of the Soviet Union, as if Haley’s comet bookends the rise and fall of not only the nation, but the corresponding fortunes of the narrator’s family.

The Year of the Comet is written in dense, descriptive and metaphoric prose, as the eyes of a young boy transform the ordinariness of daily life into the extraordinary. Yet, there are signs throughout this book that it is really written from the perspective of an adult, looking back in time. And so, through the remove of history, and perhaps through clouded lenses, the novel reads almost as if the narrator is moving through a dream. Emotions seem muted, even in passages that address deep turmoil. The reader is told of these moments of angst, but it is related in such a way that the reader observes it, instead of experiencing it. In this way, the novel becomes an almost-nostalgic snapshot of a transitory moment, a remembrance of a lost way of life, before the imminent political upheaval and the inexorable process of aging, of personal change.

While this style of writing fits an adult remembering his coming of age, it sacrifices a sense of urgency. Instead of fear of the unknown, the reader is instead reassured, as if it is the grandmother speaking, that everything will turn out well in the future, not just for the narrator and his family, but for the country of Russia as well.

Christina Tang-Bernas lives in California with her extroverted husband and introverted cat. Her work has appeared in WomenArts Quarterly Journal, Kansas City Voices, and Brevity Magazine. When she isn’t writing, she engages a different part of her brain by copyediting academic manuscripts. Find out more at christinatangbernas.com.