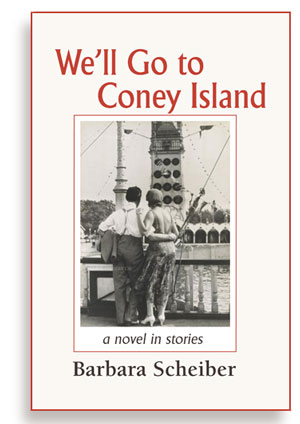 With all the recent speculation about octogenarians releasing novels, it’s exhilarating (and encouraging to writers everywhere), to read this sweeping first novel by Barbara Scheiber, published just last year when the author was 92.

We’ll Go to Coney Island, which was 30 years in the writing, tells a semi-autobiographical story about one family across generations, with a mother’s secret as the thread that connects everyone. The story is a set of relationships, conflicts, and memories as time passes. Scheiber was formerly a radio producer for NBC, and in 1975, she was involved in drafting the Education for All Handicapped Children Act.

The book’s cover is a Walker Evans photograph of the backs of a man and woman at Coney Island. Evans took the photograph, which captures the scene Scheiber describes on the page one, in 1928. The Metropolitan Museum of Art featured it as a signature poster for a retrospective of the photographer’s work in 2000.

There is double-meaning to the photograph’s use as the cover illustration for We’ll Go to Coney Island: the man in the image is Scheiber’s father, Harry A. Gair, and the woman is Harriet, his lover and later Barbara’s stepmother.

Scheiber came across the photograph in the New York Review of Books about ten years ago after she had already been working on We’ll Go to Coney Island for a decade.

Barbara’s fictionalized Harry is Aaron, the loose thread that unravels her story. In 1916, on the eve of Aaron’s wedding to Minna, the threads are just starting to become tangled. In fact, Minna holds the story together as much as Aaron pulls it apart.

Scheiber’s fictional family includes Aaron and Minna Gershon, their children, Rachel and Daniel, and grandchildren, and Aaron and Minna’s new spouses. The shadow of Aaron’s lovers drifts across that family dynamic. Sometimes, his lovers are not shadows but new characters, just as real as everyone else. When Aaron is dying in the hospital, the reader meets his latest lover and finds that the story might unravel just a little bit more.

The book’s subtitle is A Novel in Stories. I like interconnected short stories as a form, and Scheiber does an excellent job using it to her advantage. Families are full of dysfunction, memory, and tradition, and quite often, feelings, memories, and traditions cycle back across generations. Scheiber lets the reader keep moving forward through time, but not without returning the reader to 1916 every other chapter when Minna and Aaron first meet and fall in love. 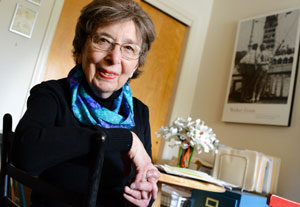 Scheiber uses the form to tell two parallel narratives—past and present—that taken separately are rather linear. Once she puts them together, the linearity is distorted. This creates emotional resonance: the past and its formative memories does not yield or relinquish its hold on the present; it continues to resurface, even when Minna, suffering from Alzheimer’s, is left in the barren room of a nursing home. But what does Minna remember in that moment? Unexpectedly, she asks the woman if she would like any eggplant. Aaron loved Minna’s eggplant.

The last chapter takes the reader back to 1916 on the eve of Minna and Aaron’s wedding, when the relationship that will allow this story to unfold in the first place is about to become official. The past has the final word. Without the past and that moment, the reader would have little interest in the person Aaron takes to Coney Island.

Aaron was a teenager in one of the Jewish settlement houses in New York, and Minna, originally from Bucharest, falls in love with him, much to her father and stepmother’s dismay. I want to say that Aaron is in love with Minna, too, but the weight of that love is hard to discern. Aaron seems to fall in love with everyone around him so that they, in turn, will fall in love with him. His many women indicate that Aaron loves to be loved, but this is not unique. Arguably, all of the other characters feel that way, too: they love to be loved by Aaron. Perhaps most notably, his daughter, Rachel, and his first wife, Minna, want something from him that he can never give. Rachel outgrows this behavior on some level, but Minna does not, even with a second husband.

The chapters that take the reader back to 1916 are told from Minna’s perspective, and in these chapters that take the reader backwards in time, Scheiber reveals the origins of the complex relationship between Aaron and Minna. About halfway through the book, Scheiber takes the reader to a crowded room in the settlement house, where she reveals Aaron’s love of words and their power, and how “often when [Minna is] with [Aaron], he disappear[s] into his ideas, as if his mind [is] a room she [can’t] enter. [That night at the settlement house], he had brought her in.” Moreover, after Minna feels like she is part of Aaron’s world of words and ideas, she resolves to use her own strength to help Aaron achieve his goal of going to law school. Scheiber writes, “[Aaron has] a golden tongue. [Minna] could help him be what was in him to be.” Minna loves Aaron and wants to demonstrate her love by helping him achieve his goal, but helping him become an attorney does not make Aaron belong to Minna anymore than he belongs to any of his other women.

Scheiber always returns her reader to Minna’s perspective as a young girl in 1916. This way she becomes the thread that connects all of the chapters. Here, Scheiber writes fluid and quick-moving sentences, which makes the many years that Scheiber describes quite literally adhere to the adage, “time flies.”

Approaching the decision to marry Aaron, Minna sees him with another woman, Dora. She has to turn away Meyer Shub, the permitted choice of her father. She doesn’t love him. And yet, she’s just seen Aaron with Dora. Should she turn him down too? She cannot, for “whatever choice she made would be a lie. Whatever she did, she would keep the truth a secret.” For the rest of her life, throughout the arc of generations of her family, Minna tries to keep the truth a secret. And just what is that secret—that Minna started her marriage to Aaron with only a fraction of him. She never had all of him, so when they are divorced, it is only a reminder of that truth she had tried to hide. Of course, it’s the secret, and the way that Minna keeps it, that pushes the reader along.

Even as Minna begins to suffer from Alzheimer’s, turning her into what the nursing home facility calls a “forgetter,” she tries to keep the truth a secret. After Aaron dies, Minna insists that the old will that leaves her fifty percent of his estate is still valid.

Minna likely knows that the old will is no good, that Aaron left her no money. However, she desperately wants to refuse that truth, to bury it inside of herself, so that she can keep fighting—not for Aaron but for Aaron to love her in a way that confirms her own claim to him, her own love for him. Until her children tell her that Aaron wrote another will (and even then she still clings to hope that she can get some of Aaron’s money), Minna believes that she can still at least have part of Aaron. By way of his money, she can have part of him, lay her claim to him, redo parts of her house and always be reminded that it was Aaron’s money. In that way, Minna could feel like Aaron did something for her to let her know he loved her.

And then there is Charlotte, Aaron’s second wife, based on the woman in the Walker Evans photograph. Charlotte desperately wants to have a family and be a mother. On outings with Aaron, and his and Minna’s children Rachel and Daniel, Charlotte imagines that they are a family. But Rachel will never let her have that fantasy. Charlotte becomes upset when Rachel tells a store cashier that Charlotte is not the kids’ mother.

Charlotte suffers multiple miscarriages—she can’t have children. Later, when Rachel confides in her about her own pregnancy, Charlotte suggests letting her and Aaron raise the baby as their own. Rachel refuses. Like most of the characters, Charlotte, after a family with Aaron, doesn’t get what she wants. The rest of Aaron’s family never gets Aaron.

But what about Aaron’s son, Daniel, the boy whose brings Aaron home in the morning only to be greeted by Minna’s accusing eyes and words? It is Daniel who finally realizes his mother’s much-repeated dream to become a doctor. This is satisfying: someone has finally listened to Minna. Perhaps the characters only think they never really get what they want. Satisfaction can certainly be indirect.