THE WAY THROUGH THE WOODS: ON MUSHROOMS AND MOURNING
by Long Litt Woon
translated from the Norwegian by Barbara J. Haveland
Spiegel & Grau, 292 pages
reviewed by Beth Kephart 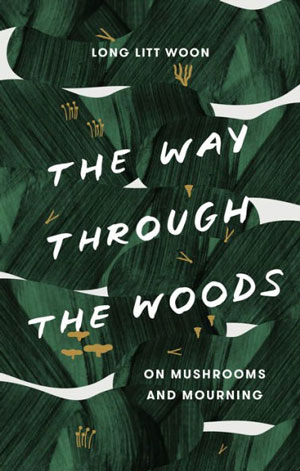 I bought Long Litt Woon’s The Way Through the Woods: On Mushrooms and Mourning for the promise embedded in the premise. How would Woon make her way back into the world after the shocking, sudden death of the fifty-four-year-old husband with whom she had spent all her adult years? What do mushrooms have to do with recovering from such a loss? Does anybody ever actually recover?

Woon, who moved to Norway from Malaysia as an exchange student at the age of eighteen and stayed because of her love for her husband, Eiolf, is not, as it turns out, interested in the literary fissures and expansions and movements that generally interest me. Her prose, as translated by Barbara J. Haveland, is determinedly straightforward, lavishly undecorated, direct and directly to the point. Her structure is neither chronological nor intuitive. She holds her memories of her husband close, revealing little of the man she clearly loved, disclosing only the smallest glimpses of herself. She begins:

This is the story of a journey that started on the day my life was turned upside down: the day when Eiolf went to work and didn’t come home. He never came home again. Life as I had known it was gone in that instant. The world would never be the same again.

It’s the mushrooms that primarily preoccupy Woon in this book—the hunt for them in Norwegian forests, the challenges presented to amateur students and foragers, the friendships that begin to form over mushroom-themed meals, the way Woon’s “concentration is sharpened and the tension mounts” as she goes out into the Fungi Kingdom and reports back on the wildly interesting species that bruise, poison, delight, elude, or (depending on your preference) catalyze hallucinations.

Woon is, as it turns out, a terrific guide to mushroom secrets, scents, and dishes. She gets so good at this mushroom thing that she passes the difficult-to-master inspector’s exam. Her plainspoken prose provides essential clarity when she reports, say, on the fact that “the bulk of the mushroom consists of a dynamic, living network of long, shoestring-like cells known as mycelium, which spread underground or through trees and other plants,” then goes on to describe the world’s largest organism, the honey fungus, which “covers a stretch of woodland corresponding to almost four square miles” and is “estimated to be between two thousand and eight thousand years old.” It’s interesting stuff, riveting in its way, and about halfway in I decided to stop looking for the lyric leap so that might I experience this tale the way Woon chose to tell it. To follow her as she zags from morels to brain mushrooms, from the vocabulary of mushroom smells to the art of catching mice, from psychedelia to mushroom “bacon.”

Sure, I would have liked to have seen so much more of the husband that was tragically lost too soon; Woon shares a few tidbits, but we rarely meet Eiolf inside a scene. Sure, I would have liked to have known more than what Woon shares about the essence of her once-shared home. But the more I read, the more I remembered that this memoir had not been written for me. It had been written because Woon discovered, in the dark country of her grief, so many lanterned forests. She discovered mushrooms hiding in plain sight, and she took them into her kitchen, and she invited friends, and she was alone no more.

Beth Kephart is the award-winning author of more than two-dozen books, an adjunct teacher at the University of Pennsylvania, and a co-founder of Juncture Workshops, which offers memoir resources and teaching. Her first memoir in many years, Wife|Daughter|Self, is due out from Forest Avenue Press in early 2021. More at bethkephartbooks.com.