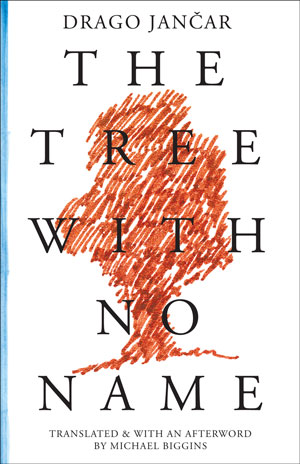 THE TREE WITH NO NAME
by Drago Jançar
translated by Michael Biggins
Dalkey Archive, 274 pages

Contention over millennials’ degree of entitlement hasn’t been limited to the United States. As we learn from Slovenian writer Drago Jançar, in fact, the generation gap has an equally special significance in the former Soviet Bloc, where, according to translator Erica Johnson Debeljak, writing on the Dalkey Archive Press website, the “new generation…takes independence and freedom, the Slovenian language, and shopping malls to be their birthright.” Communism is outdated. That’s why The Tree With No Name is so timely. The issue is not simply post-birth pangs (Slovenia was established in 1991 with the USSR’s collapse). Rather Jançar asks, what is there for the old generation in a new world?

To Janez Lipnik, the archvist protagonist who’s preternaturally incapable of letting go of the past and which he belongs to, it’s all that’s left. “Wherever there is no past,” he thinks, “the world is fundamentally unreal.” The overarching dread of becoming a living artifact overcomes Lipnik after his wife, Marijana, points out a women’s bicycle that is pulled from “the poor river whose bad luck it was to run through the center of the city.” This has happened after Lipnik has started work on the diary of “The Great Lover,” as he dubs him, who “slept his way” through World War II; after he remembers his grade school teacher, Zala, had a bike just like it; after he discovers a secret about his wife’s past, which destroys their marriage. “After,” in the sense of Klee’s Angelus Novus: In the words of Walter Benjamin, “He is about to move away from something he is fixedly contemplating.” The novel opens with chapters Eighty-six to Ninety-nine, going down to One (when the bike is found) and back up to Eighty-five, reduplicating the unhinged obsessions of the archivist to retrieve a lost world, the past, as it moves rapidly away.

An editor could make a decent supercut of various awkward phrases in the prose, like “he broke my dreams,” which distract from the otherwise beautifully oppressive surreality. Despite these phrases, the weight of this “eternally repeating story” is consistent and evenly spread. How does the poor river have bad luck then? Because, as with Lipnik, and as with the reader, it runs though the center of a Post-communist history, constantly ebbing and receding.

The Tree With No Name is not Jançar’s first work translated work into English. In 2011, Dalkey brought out his 1978 historical gothic The Galley Slave, translated into English by Michael Biggins. In translation, The Galley Slave, a now Slovenian classic, comes across as too bitter, finely tempered as almost to be Po-Mo. The plot is waylaid for cultural reflection, though the reflection is as tautly written as you’d expect from a Gothic novel. But, to our benefit in a Tree With No Name, Biggins’ handling of Jançar has improved greatly. The translated prose is as fluid and driven as the oft mentioned river running through Lipnik’s, city.

For the American reader, there is a parallel in William Faulkner’s Absalom, Absalom. After all, both Jançar and Faulkner give breath and breadth to the loser’s side, whose history is unwritten, mostly unremembered. Hence Lipnik’s insistence that “everything is interconnected,” and his attempt to rebuild memories from coincidences, much like the characters of Absalom, Absalom. Like Faulkner, Jançar gives the past a visceral emotional power:

She doesn’t understand that he’s looked into the abyss and beyond wakefulness into dreams, and beyond dreams into the past, beyond his birth, and that he’s traveling back somewhere, constantly back. That every event, the whole sequence of events of the past few weeks was borne out of that glimpse of the bottom…

Down to the breathless pace and toehold punctuation, the ordering of abstractions into causalities, the reader begins to realize this is the Slovenian Faulkner. It would be unsurprising if Biggins had this passage from Absalom, Absalom in mind while translating:

That is the substance of remembering—sense, sight, smell: the muscles with which we see and hear and feel not mind, not thought: there is no such thing as memory: the brain recalls just what the muscles grope for: no more, no less; and its resultant sum is usually incorrect and false and worthy only of the name of dream.

And not simply Biggins, who likely had considered the similairites between the Faulknerian recollection-dream and the Jançarian history-dream conflation, but Jançar himself has commented on the influence of Faulkner on his work. These obsessions meet at the titular tree, through whose dreamy roots and branches runs the veins of a past constructed from fleeting perceptions (memories of the American and Slovenian Civil War, or The Great Lover’s diary). “The only problem,” As Lipnik puts it to his wife, “is that you can’t erase anything, but you still have to tie it together, don’t you see?”

The question is not why remember, but whose memories? In one of the lighter meta-fictional moments, Lipnik ‘says’ (a consequence of this form is that verbs tend to be perpetually tentative) to passers-by, “this is no archive, this is my personal history, my embryonic history.” We live with Athena in our head and her wisdom, despite his boss, the archive’s director’s, insistence that he “was not here to reconstruct stories,” is what we birth, and lose in the birthing. Or, in one of Jancar’s subtle Greek conceptualization, in this “labyrinth of history.” Since “everything is interconnected by slender threads, which can break. It’s no surprise that we have millennial becoming a pejorative. These threads, Ariadne’s klew, which leads the way out of the labryinth is entangled and unending. At the crossroads, Drago Jançar asks who gets to decide which one “is logically interconnected, so clearly connected.” As we’re reminded of Lipnik’s honeymoon with Marijana on the island of Dugi Otok, we’re equally reminded that he has grown old. As does everyone.