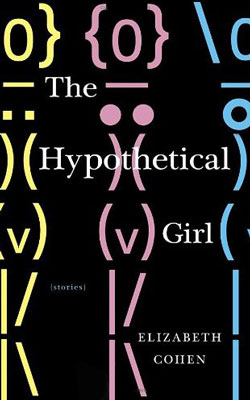 ­THE HYPOTHETICAL GIRL
by Elizabeth Cohen
Other Press, 256 pages

Like so many of the characters in Elizabeth Cohen’s fifteen incisive stories in The Hypothetical Girl, Emily in the title story is truly suffering. Her affliction is contemporary. Girl meets guy online, falls hard for him, and is rejected by him before their relationship ever has a chance to develop out in the real world. What happens when people connect online, on sites like Letsgethooked.com, Flirtypants.com, and Yummybaby.com? Many of the stories have a sad, humorous and twisted logic. Emily—who meets Nick on Matchmaker.com—walks right into the new anxiety. “I think I miss you,” she says to Nick. “Can one miss someone one has never met?” Nick’s answer (“You can, but it is ridiculous”) is devastating. In a way, it is a simple case of unrequited chat love. Nick does not see Emily as a real person, only as an online chat partner. Cohen captures his problematic point of view: “‘You are not an actual girl,’ he wrote. ‘You are hypothetical.’” Emily’s feelings for Nick, a guy locked away in the online universe, lead her to experience herself—not Nick!—as less and less real. She is overwhelmed by her feelings for a person who is real but not real; out in the world, she is fading away.

In another story, “Dog People,” the oddness of the web arrives in its absence. Clarissa and Harry meet while walking their dogs in the park. Clarissa chats on Facebook with a friend about this budding relationship. “Oh wow,” the friend writes. “A real-world man. You don’t hear much about that anymore.” In this story, though, the ending that takes place in the real world has the feel of online. The man disappears in a way that is surprisingly swift and complete, like the closing of a tab. 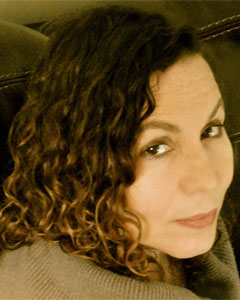 Again and again, in this collection, Cohen maps out the strange terrain of her characters’ travels online. Her characters set out full of hope—intrepid and romantic explorers. Often, it doesn’t go well. “Blame it on the Internet,” says a therapist in “Limerence.” In this tale, a guy named Larry is suffering from something that feels huge but unnameable: “It was like a drug but it was not a drug.” He had connected with Louise online, but she stopped writing. Cohen writes, “There was no minute that went by when he did not want to check his cell phone or his e-mail inbox, or rake over the text messages in the Louise file.” Larry is finally helped when his therapist finds a name for what is wrong with him. The therapist says he has a disorder called Limerence, “an obsessive, unrequited love.” Larry’s problem sounds like something that could happen to anyone, online or offline. In this case, having a name to hang onto makes all the difference for Larry, and for a little while he runs around saying the word over and over again, taking pleasure in the sound of it, relieved by the validation of his suffering as real. Cohen writes with panache about the very particular afflictions of the web that arise when the division between real and not real becomes so murky.

The fifteen tales are humane, if dark. Cohen maintains an edgy humor while looking clear eyed at what often goes wrong when her characters take risks. I found myself thinking that Cohen’s accomplishment is related to an adventure remembered by the protagonist of one of the stories, Alana in “Life Underground.” Alana recalls a childhood family trip into a cave. The tour guide showed them glittering, beautiful stalactites and stalagmites. He also brought them into an unlit chamber in the cave, letting them experience “real darkness, actual darkness, rare in our world.” Cohen’s stories, written with sharp humor and intelligence, are attuned to both light and dark.