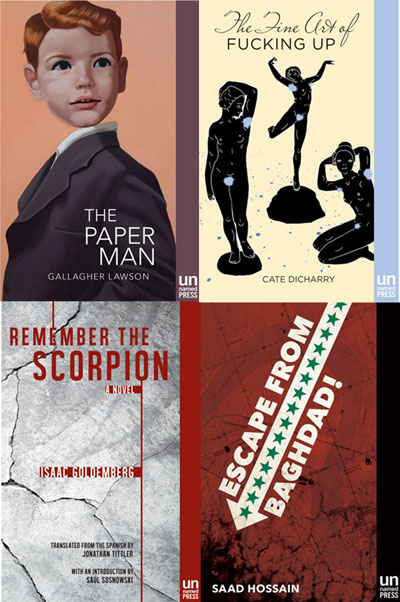 REMEMBER THE SCORPION
by Isaac Goldemberg
translated from the Spanish by Jonathan Tittler
Unnamed Press, 133 pages

THE FINE ART OF FUCKING UP
by Cate Dicharry
Unnamed Press, 230 pages

The wryly-named Unnamed Press out of Los Angeles is living the self-appointed paradox of making a name for itself. Any independent press walks the line between sufficient eclecticism to draw in a swath of curious readers, and a strong enough identity to stand out from the pack. Unnamed Press has achieved this goal with a set of spanking new novel releases: Escape from Baghdad, Remember the Scorpion, The Paper Man, and The Fine Art of Fucking Up (possible best title of the year).

A decided taste rules the selections:

There is snappy dialogue. “He’s a sullen little shit, but his work’s pretty good;” “All of Lima smells like a woman in heat.” “I dream only in American.”

There is narrative pith. The first, brief paragraph of The Fine Art of Fucking Up reads,

I am sitting behind my desk watching the downpour when I catch the scent of bacon. Dunbar is in the building again, despite the restraining order.

Who isn’t going to proceed to the second paragraph on this gambit, to see what’s what? 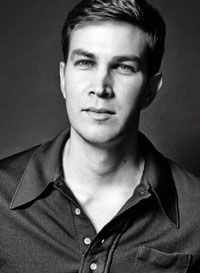 There is pungent social heft. The Paper Man lives up to his billing, literally made of paper, trying to gain entrance to a sinister peninsular city in a dystopian time. Escape from Baghdad follows Dagr and Kinza through the opposite motion, escape from the ongoing apocalypse of war. Remember the Scorpion accompanies Detective Weiss through a Lima of tremors, gambling and murder.

There is a prevalence of somber comedy, irascible, nervous, gritty, or cynical sojourners toughing it out with wit, at wits’ end.

In short, the four books I received all at once, made not for a chamber quartet, precise and sedate, but a syncopated four-hander, as they seem to quarrel among themselves for top dog status. Goldemberg, a consecrated Peruvian Jewish author, not as famous as his Nobel-winning generational counterpart, serves up a hard-boiled neo-pulp, less textured and penetrating than that of Mario Vargas Llosa’s mature work, but reminiscent of the latter’s youthful The City and the Dogs. At its weakest the pages could be a Raymond Chandler outtake. “He ended up in Chinatown, a few blocks from the Central Market.” At its most potent, this novel sketches critical moments in succinct prose. In the midst of an earthquake,

From San Cristóbal Hill . . .descended a cloud of dust that veiled the reddish brilliance of the sun, which, poised to be eclipsed, was suspended above the city sky. Flocks of birds took flight and collided with each other. 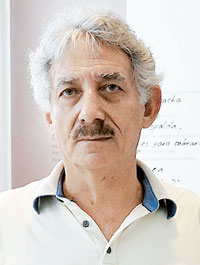 A fine introduction by the notable scholar Saúl Sosnowski and an endnote by the translator, Jonathan Tittler, concisely bookend Goldemberg work for new readers and put his novel into helpful context. Hossain and Goldemberg, Dicharry’s main men, in different ways, are plain spoken; Lawson, low-key in style, yet creates an eerie atmosphere, layering discomfort with strange prose effects. The bus in which The Paper Man journeys almost runs over a beached, mangled mermaid.

The triple set of gills—crusted with sea foam and bursting from each side of her neck, told him this creature had not originated on land. Her skull—crushed, the bones piercing the skin of her face. One of her webbed hands held a rusty knife; the large fin that extended in place of legs had been severed down the middle and was filled with a canyon of dried blood.

I was willing to coast through some blank, overly plain passages for the reward of such sensory flashes, which wax fantastical yet remain anchored in precision. I found a misnomer in a blurbed reference to Kafka, whose influence is oversold on many back covers. That comparison has come to represent a mere rough approximation to the style of writers who offer a journey into hyper-reality. Magical realism doesn’t fit as a moniker either. Let’s just call The Paper Man an ordinary world that has no problem accommodating incursions of strange business. 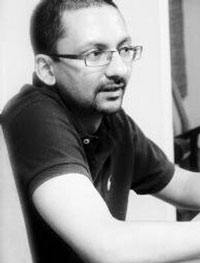 There is much to like in in Hossain’s peppery, tragicomic pilgrimage. The book is divided into thirty-six memorable, often clever, subtitles (“Blackboard Rage;” “Further Inside the Watchmaker”) and short, punchy chapters that deal three-card monte among points of view. This structure works, echoing the concussive content of men navigating a maze of erratic streets, down to their last shared nerve.

An exemplary chapter is “Death by Kibbeh,” a mere four pages in length. After winning a big poker hand, Tommy is required by the losers to spring them all to a meal on the street. There follows an extended, luxuriant description of the delights of kibbeh, followed by a sudden bomb blast and the theft of Tommy’s hummer by urban Arab guerrillas.

Now, (the vendor) mixed in salt, pepper, and a bit of lime juice into the mash, remixing the stuff with a fine wooden spoon. He took out an egg-shaped scoop and used his thumb to hollow out the center into a kind of meat donut. The stuffing balls went in there, and two quick pinches on either side completed the kibbeh, beautiful ovals with a single point end.

That is only a portion of the para-Proustian prose that expresses Tommy’s elation for his favorite quick meal. 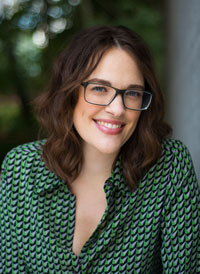 Dicharry’s dyspeptic protagonist gets the last word here, and she would like that. This novel doesn’t break the mold. Jane Smiley, Michael Chabon, and Francine Prose come to mind. But this art school confidential offers its own course of study. Wild-eyed Dunbar, the nemesis professor barred by a restraining order yet refusing to respect its terms, provides a foil and a pretext that keeps the action going. Less interesting is the narrator’s benevolent husband, whose interlocutor duties kept me unwillingly from the main action. But the catalogues of Dunbar’s misbehavior alone serve up a delicious blue plate of packed prose that draws us down into demented doings.

Dunbar’s oeuvre includes hatching ticks in the main gallery as a statement against the blood-sucking School of Visual Arts management and assigning his Performance Art II class to assemble a twelve-person Viking battleship—“my ketch, my schooner, my clinker-built knarr.

In this fervid foursome offered by Unnamed Press, we get a vibrant sample of robust, sometimes rowdy, and rigorous writing that deserves its place on a best-of list. The editors are doing something right, and looked poised to keep doing it.