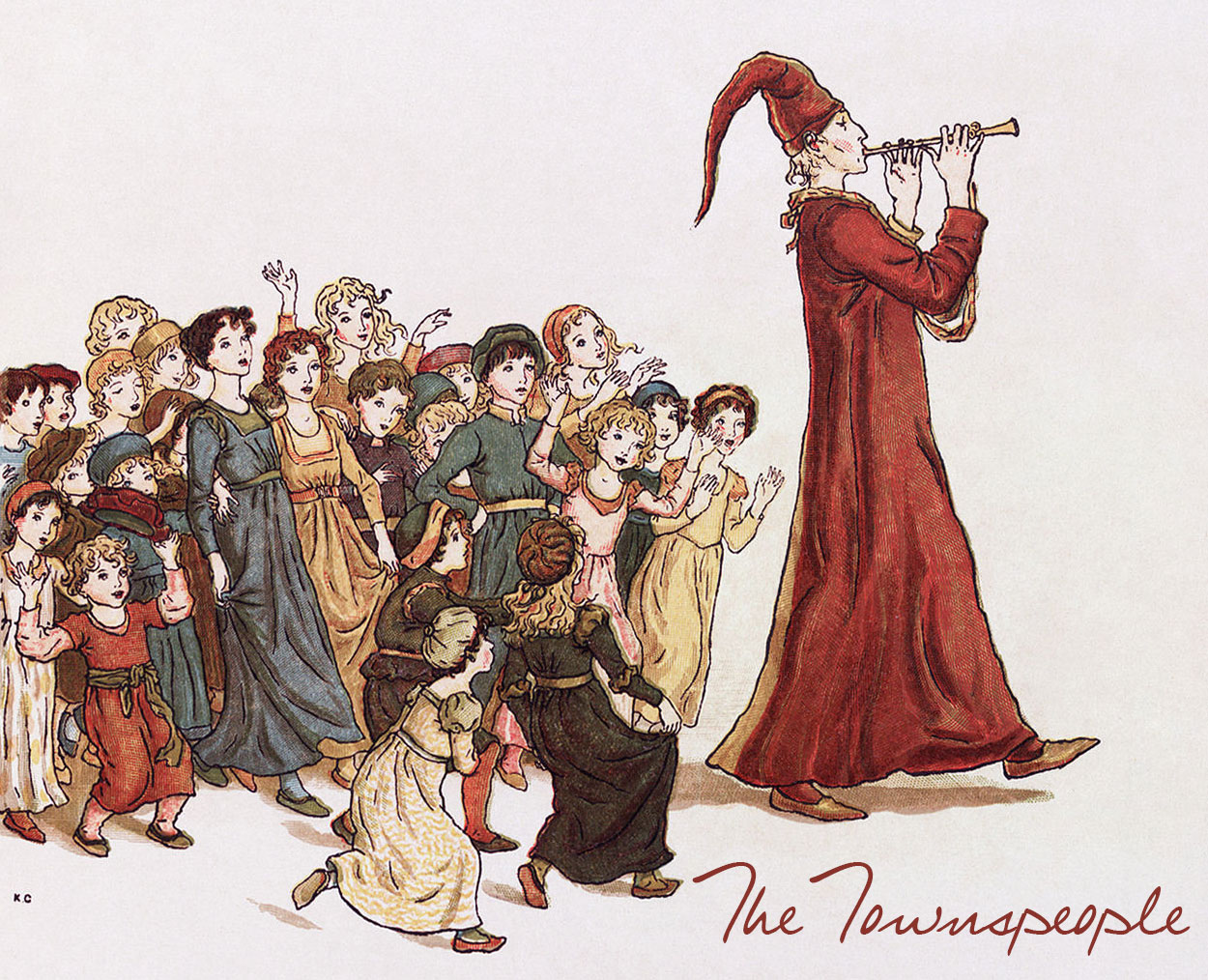 THE TOWNSPEOPLE
by Emily Livingstone

It started gradually. First, little Michael was wrinkling his nose in a way he never had. Then four-year-old Jessamyn across the street sprouted whiskers from her cheeks that were long, fine, and nearly transparent. Elisa developed a light coating of tiny hairs that were thicker than body hairs ought to be and that turned gray within a few days. Paul was the first one to grow a tail. His tail was long, pink, and hairless, and at first he delighted in it, and used it to tap other boys on the shoulder when they weren’t looking. Then he realized it was not coming off, and he wailed in his mother’s arms. His mother, for her part, tried not to cringe as his tail wrapped around her leg.

Soon all the children had fur and tails. Their ears had grown bigger, rounder, and thinner. Their noses had lengthened. The adults tried their best to continue on. They kissed their children between their beady black eyes and helped them to put on their backpacks and board the bus for school. Many of the children began walking on all fours, which greatly disturbed the adults. It wasn’t all bad—the children were not nearly as picky about eating, and in fact, seemed to think nothing of nibbling out of the garbage or off of the sidewalk.

When the children began to shrink, it became difficult to tell them apart from, well, rats, and from each other. Parents took to calling for their children, looking vaguely forward, and hoping the bulky little forms that hurtled toward them were their own.

Finally, the adults held a meeting. They tucked their children into bed, or at least, they said goodnight and shut the bedroom doors, for most of the children were nocturnal now, and declined to stay in bed at night. Then they all met in the town hall.

Was it something in the water? Was it genetically-modified vegetables? A sickness? A curse?

They didn’t know. Their children could no longer speak. They didn’t play normally. They were not affectionate and sometimes bit the hands, arms, and legs of those who fed them.

A vote was taken, and the town decided to ask for help. They were just putting together a Craigslist ad when a man wearing a tattered cape and a cap with a feather in it came strolling up to the podium like he owned the place.

“My name is Peter,” he said earnestly, “and I’ve heard of problems like this. There are towns in Europe that have precisely the same epidemic.”

“What do we do?” Michael’s father wanted to know.

“Why haven’t we heard about this?” Jessamyn’s mother asked.

“Understandably, these towns have kept this quiet. They don’t want judgment, and what could people do? Who would believe them, and even if they were believed, what course of action could be taken?”

The crowd murmured in uneasy agreement.

“My friends,” Peter said, “I will solve this problem for you. When I play my pipes”—here he held up gleaming silver pipes—“the rats will follow me. I will take them far from here and you need never be troubled by them again.”

No one had ever used the “R” word to talk about the children up until this point. Many had thought it, but no one had actually said it. There was an uncomfortable silence before Peter resumed:

“You can start your lives over. Clean up the feces. Buy new carpets. Bear new children and buy them toys that have not been gnawed. These will be your true children, and all of this will be like a nightmare you barely remember.”

“There’s nothing to fix,” Peter said. “They are just that: rats. They are perfectly fine rats, but they are rats.”

“Where will you take them?” Paul’s stepfather wanted to know.

“I’ll take them to Eden Farms,” Peter said. “There they will be housed with other rats from the towns I mentioned earlier, to live out their days comfortably, able to gnaw whatever they please and scuttle around wherever they like.”

Then Peter took a seat. There was some heated debate. Some stormed out of the meeting, went home, herded their rat-children into their cars, and drove out of town. The majority voted to take Peter up on his offer.

“Excellent,” Peter said. “There’s only the payment to be discussed.”

Peter took his money from the treasurer, and the townspeople followed him outside, where he put the silver pipes to his lips.

“Right now?” someone asked in horror.

He began to play. The melody started off happily with little runs up and down, but then it shifted into a steady, persistent rhythm with a repetitive phrase. Rats climbed out of windows and through cracks in the walls. They formed a teeming mass of gray-brown fur and twitching pink tails. They crowded round the piper, who began to skip and dance as he played, and he skipped and danced his way beyond the hills at the edge of town, with the rats following. The adults watched until the last rat was out of sight, then they shuffled back to their homes in a daze.

The next day, the town was silent. And the next. And the next. Then people began to do as the piper had suggested.  They fixed up their homes. They packed away all the pictures of the children they’d had, who now felt mostly like characters in storybooks they’d read long ago. They dared to bear new children.

Some townspeople refused to move on properly. There was a contingent who got together to find Eden Farms. There was no trace on the Internet. No one had been there. Nevertheless, they packed up their belongings, bought an RV, and went in search.

Then Debbie Johannsen came back to visit her mother. She’d been one of the ones who left with her rat-child, Dylan. Debbie came back, and in the backseat of the car was Dylan—furless, whiskerless, human.

People stared at Debbie and Dylan. She stopped the town dead in its tracks. It probably didn’t help that she looked a bit superior—that she stuck her nose in the air.

A crowd gathered outside Debbie’s mother’s house. Though this was not the age for them, the crowd had torches and pitchforks. They demanded that Debbie and Dylan come outside, then chased them out of town and over the hills, throwing rocks and shouting.

The townspeople checked their new children each morning for fur, elongated teeth, and tails.

Winston Martin thought he could see the beginnings of whiskers on his infant daughter. Chantelle Martin said he was crazy, and clutched the baby protectively, but when she slept, Winston took the child out and laid her on the hill where they’d last seen the piper.

When the police found the cold, human body the next morning, they brought Winston to the station but were unsure how to proceed.

“She had whiskers,” Winston insisted.

Julie Nguyen trapped two rats down by the docks and brought them to her house. She trained them to sit in a purse and carried them everywhere around town.

“They’re my children,” she said. “It’s my Tori and Freddy. They came right to me, back from Eden Farms.”

Eventually, many of the parents trapped rats down by the docks and brought them back home. They fed them good food, trained them to do tricks, and called them by almost-forgotten names, but the rats never became children.

As the years passed, the pain became too large, and it took up more and more space in the town, so people started to move away.

Now there is no town in that spot. There are boarded-up shops and businesses, and the highway passes close by. There is a gas station right off the exit, and sometimes travelers filling up catch a glimpse of falling-down houses.  More than likely, if they’re looking long enough, they also see the rapid progress of a gray furry form across the road. 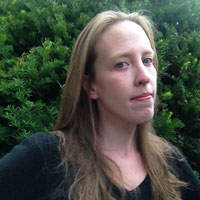 Emily Livingstone is a high school English teacher and writer living in New England with her husband, daughter, and German Shepherd. Her work has been published in The Molotov Cocktail, Chiron Review, Gravel, and others. She also writes at emilylivingstone.wordpress.com.