THE STIGMA OF BEAUTY, THE STAIN OF GLASS
Glass Art
by Judith Schaechter

I am fairly certain that many people experience my pieces kind of like this: Judith Schaechter is an artist who makes images in stained glass of anguished women set against highly decorative backgrounds. People often see my works all at once as a group — presented in a show or reproduced in an article — but to me, each piece is vastly different and each one arose over long periods of time. But yeah, I get it: anguished women and lush, decorative backgrounds. 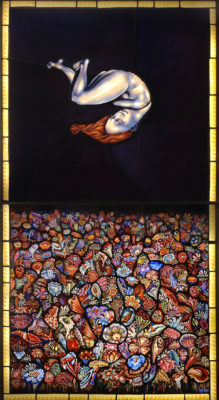 I started working in glass when I was a painting student at the Rhode Island School of Design. I took a stained glass elective course and was hooked. Looking back, I think that had a lot to do with time and tedium. I was in the habit of painting fast and furiously, with a lot of anxiety about the blank canvas. It was easy enough to cover that up, but I would later gesso over the parts that weren’t working and found that ultimately I was looking again at a blank canvas. With glass, on the other hand, it takes a long time to bring about a transformation. It can take days to make the glass do anything, and I found that during that time I would achieve what psychologists call “transference.” In other words, I’d grow deeply attached to the work.

Glass is a magical medium. I am using that word specifically because it alludes to the sort of Vegas-y glitz that has led some people to disrespect it as a medium and to distrust it as a serious contender for art making. Glass is one of the few materials that looks good before you touch it, and that’s dangerous because anything you do to it risks ruining it, as opposed, say, to clay, upon which anything is a vast improvement. But glass can be far more than merely superficial. 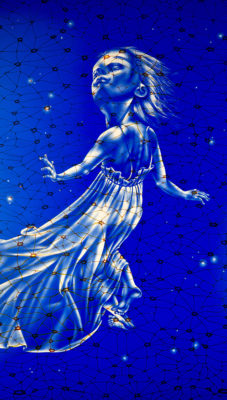 Abbot Suger (the 12th century monk who designed the Basilica of Saint-Denis) cited the spiritual promise of stained glass when he said: “stained glass is enlightenment embodied.” And how true that can feel when inside a cathedral (even if you are not religious!) But the flip side is that stained glass is particularly guilty of disillusionment; it promises so very much that when it falls short, it is extra disappointing. Stained glass suffered as a medium when demand for it decreased during the Protestant Reformation, and it suffered further as art became more and more separate from the Church. When I started working in glass, my first thought was that no one had done anything new with it in centuries, with the exception of Tiffany (whom I happen to dislike). I liked the challenge of working with a risky material and I particularly liked its neglected history.

As it turned out, the distorted, anguished figures and decorative backgrounds that looked like a pantomime of teenaged angst when I did them in oil paint, looked a lot more authentic in stained glass. Perhaps they needed real illumination to make them seem as though they were burning inside.

And so, glass it was.

Today I’m often asked, “Why do you do those things you do?” Understandably, that’s what people want to know from artists, and if we could make sense of that in words, we’d be very lucky indeed, because part of the reality is that if we could say it, we wouldn’t need to make it.

It helps to narrow it down some to two questions: why does it look the way it does, and how do you choose a subject.

I doodle a lot and I would go so far as to say I don’t have “ideas” per se. In order to launch a project, I need to literally draw it out of me. Inspiration is something that resides in me like a swamp monster in murky depths. I don’t see things in my head first and then draw them. I draw in order to see them. And so I doodle — and I see flowers, animals, female faces. Why? I honestly have no idea, and can only give a tautological response: because they interest me. 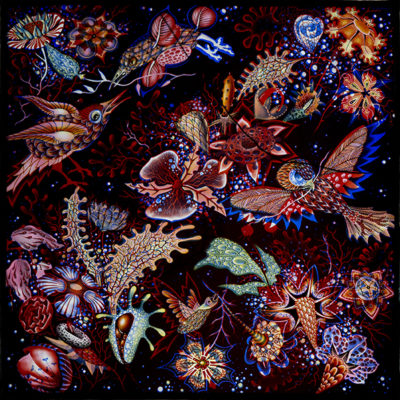 I can, however, say a few words about the significance of realism in my work. First off, perceptual realism (“realistic” realism) is not of interest to me. My flowers and faces don’t exist in nature. I have an urge to distort and reinvent — one reality is plenty in my life! — and I am attracted to other art forms of distorted realism, such as Gothic art, much Asian art, and some modern art, such as Expressionism.

As for the female faces, I think sometimes I am engaged in doll play, in that they can take on any role in a sort of proxy of selfhood. They are not self-portraits. In fact, one of my main concerns is that I want my pieces to be eternal and universal so that anyone can empathize with them. It bothers me, though, that casual observers see them as depressing. I am fascinated with the nuances of human expression and try very hard to create faces that express several emotions at once, preferably conflicting ones. So they are never just in agony, but agony tinged with ecstasy; grief offset by hope; rage tempered by serenity.

Now, about those backgrounds: they take a long time to make, longer than the figures. There is this thing in the two-dimensional arts known as the “figure-ground dilemma” — the question of what to do in the background after you’ve made a figure. Distinguishing this second dimension from the first lies at the crux of what makes us human: the ability to recognize and utilize symbolic abstractions. This is critical because one cannot help but empathize with the figure, and so its location becomes a reflection of where you are. As it was once explained to me, art is a “You Are Here” map. I hesitate to say anything mystical, or deeply philosophical (since I feel both foolish and unqualified to do so) but here goes. One of the ways art is significant beyond mere entertainment is that it contextualizes our existence in the cosmic sense. One sees an image, and one is able to echolocate off it. It’s not communication so much as telepathy. 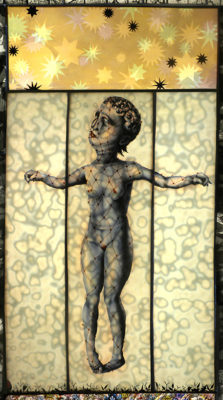 My backgrounds perhaps act as a foil for the ambivalent figure. Or maybe they’re projections of their possible psychological state, a hallucination, a dream, or even a visual representation of their speech if they could talk. However you want to see it, I consider my backgrounds to be an extension of the figure.

I believe that beauty is a Good Thing, and my works usually involve plenty of bright colors, contrasts, and patterns — abstract signifiers of beauty. But since questions around beauty have been a bugaboo in art for most of the 20th century, beauty can also be a confusing thing. Is it good for us like spinach or is it good like candy? Is it morally good, or sensually good? Mind-good or body-good? In the end, I think asking this question misses the point that beauty can be both — or, as the Abbot of Saint-Denis put it, “enlightenment embodied.” 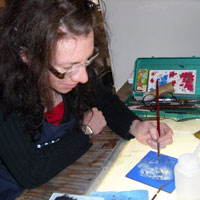 Judith Schaechter has lived and worked in Philadelphia since graduating in 1983 with a BFA from the Rhode Island School of Design Glass Program. She has exhibited widely, including New York, Los Angeles, Philadelphia, The Hague, and Vaxjo, Sweden. She is the recipient of many grants, including the Guggenheim Fellowship, two National Endowment for the Arts Fellowships in Crafts , The Louis Comfort Tiffany Award, The Joan Mitchell Award, two Pennsylvania Council on the Arts awards, The Pew Fellowship in the Arts, and a Leeway Foundation grant. More at www.judithschaechter.com and judithschaechterglass.blogspot.com. Visit her work at Claire Oliver Gallery in New York.