I was born into a family of artists, and for as long as I can remember I have been surrounded by music and painting. From an early age, my father encouraged me to carefully observe the rich palette of colors in the mountains of my native Chile, and, when we were at the beach, to make drawings in the sand. My mother encouraged me to listen to classical music.

When I studied graphic design as a university student, I was fortunate to have artist-teachers who were very talented and sensitive. Their lectures opened my eyes to a new kind of world, one that forever changed the way I looked at the environment. One of these teachers lectured on Wassily Kandinsky, an artist whose works were inspired by music and whose theories about art were shaped by his subjective experiences. The ideas in Kandinsky’s book, Concerning the Spiritual in Art, defined art as something enigmatic and mystical, born from the inner necessity of the artist and claiming its own free-standing life, its own spiritual breath. These ideas deeply touched me and remained with me, dormant until recently. I am now painting canvases inspired by music—not simply by having it on the background, but as an element alive and breathing in my work.

In spite of living far away, I feel always connected to Chile, a place I refer to as “my ancient land.” Several years ago, the nostalgia for my homeland made me recall the work of two Czech composers, Antonín Dvořák and Bedřich Smetana, whose music conveys their own love for their country. Dvořák’s New World Symphony became the incentive for a new series of paintings I began, “From The New World,” and with Smetana’s My Fatherland as inspiration, I started “My Ancient Land” series.  The sense of belonging to a place is personal and universal, and this is the reason I could and can very much identify with these musical pieces. 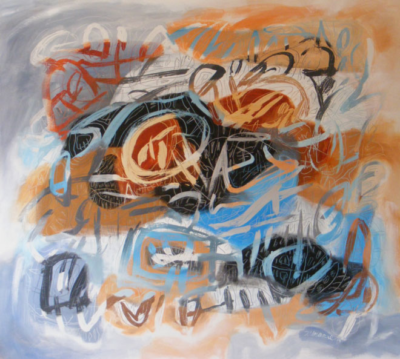 From the New World II, inspired by composer Antonín Dvořák 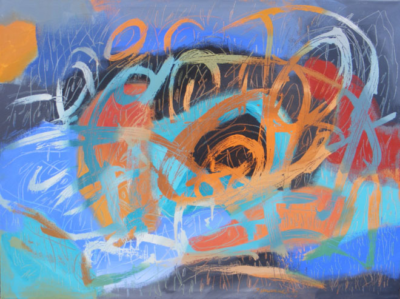 As my work evolved, I turned to Chilean classical music — six composers in particular: René Amengual (1911–1954), Eulogio Dávalos (b. 1945), Juan Orrego-Salas (b. 1917), Enrique Soro (1884-1954), Sylvia Soublette (b. 1923), and Jorge Urrutia (1905-1981). Some of these composers were stirred by the same Chilean landscapes and locales of my memory, others by the same experience of tapping into an inner “cosmos,” and one of them—Eulogio Dávalos—I was actually fortunate enough to meet in person. With this inspiration I continued painting for the series, “My Ancient Land,” which has been part of a traveling exhibit in the U.S., Chile, and Spain, curated by Gloria Garafulich-Grabois.

Many of the paintings in “My Ancient Land” series were created on large-scale canvases mounted onto walls. My ritual is as follows: once the canvas is ready, I prepare sheets of watercolor paper and smaller canvases on easels, a palette of up to twenty or thirty colors in containers, a variety of paintbrushes, and, finally—but essentially—the piece of music. I begin by quietly listening to the music. Only when I start feeling the music within me do I begin to paint. Once immersed in music and painting it becomes very physical, and I find myself expressing both the movement of the music as well as my own emotions in free and spontaneous brushstrokes that are as gestural as they are musical.

Nothing is planned, it all happens—not from the mind or intellect, but from inner emotions and sensations. I stop often to observe what is happening on the canvas and then continue, painting in layers as the movements of the music accumulate. My brushstrokes express melodic patterns as I “write” my own pictorial composition. Without a rational purpose, this is how I “paint-and-write” the music, preferably using circles, ovals, and flexible lines in a kind of dance. From there I direct my arm and hand, and in turn my brush, to follow these shapes as if they were natural musical tempos and dance figures.

Through this kind of “writing”—if I were to name my creative process—I feel most free. First, to write and paint musical notes as an artist-musician, and then to interpret them as if I were a conductor. My baton is my brush. It interprets the voices of the composers, and the silences. The bass sounds are deep blues. A variety of yellows—ranging from a bright lemon to a yellow-orange—suggest a mystical air. White is the air itself, offering a transparent hint of layers below: the musical notes that repeat themselves in the colored sounds. The choice of colors does not stem from intellectual decisions, but rather from internal perceptions, wordless sensations. Kandinsky wrote: “the sound of colors is so definite that it would be hard to find anyone who would express bright yellow with bass notes or a dark lake with treble.” For me, the most powerful part of that observation is that all of us knows what he means, without being taught, without putting it into words. It is as if we all have an inner homeland in common, a place where we are most free to color out loud. 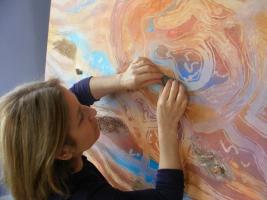 Jacqueline Unanue is a Chilean born visual artist of Spanish ancestry who has resided in Philadelphia since 2000 with her husband Ricardo Guajardo, who is an artist and designer as well. She studied design at the Universidad de Chile de Valparaíso. While a student, she became interested in the rock art found in her native country, traveling extensively through Chile’s Atacama Desert. She also traveled to the pre-historic Altamira caves in the Basque Country. Unanue has received numerous awards and grants—among them the Latin American Women in Art and Culture Tribute in 2015—and has widely exhibited her work in Chile, Spain, Finland, Ecuador, and Argentina, as well as in galleries in Washington DC, Philadelphia, Chicago, and New York. Her work can also be found in many private collections in the Americas and Europe, and she is currently represented by the 3rd Street Gallery in Philadelphia. www.jacquelineunanue.com