ON SNAPSHOTS
by Jay Pastelak

“All photographs are memento mori. To take a photograph is to participate in another person’s (or thing’s) mortality, vulnerability, mutability. Precisely by slicing out this moment and freezing it, all photographs testify to time’s relentless melt.”
—Susan Sontag

On Easter Sundays, when we were kids, after mass and before we changed from our Easter clothes, our mother would parade my sisters and me out to the yard and pose us before the forsythia for a photo. Sorry—for a picture. We knew those things that came from a camera were photographs but we called them pictures because, well, that’s what they were: pictures of us.

Later, I’d come to call them snapshots, these little segments of our life, but at the time they were just pictures. They were important to us, but they weren’t photographs. Photographs depicted bigger, important events: the school photographer made photographs because he had those lights and the camera wasn’t hanging around his neck; it wasn’t even in his hand but mounted on what I came to understand was a tripod. That was serious. That was photography. At home, we took pictures.

Everyone takes pictures. My mother-in-law had boxes of pictures from years before, some going back to her early 20th-century girlhood, some older than she. She knew who was who, what was going on, and the minutiae of the relationships between those depicted in the pictures. No visit was complete without a review of the photos, an oral history of my wife’s family back two generations.

Years later, as she was packing to enter assisted living, I acquired a shoebox of pictures no one else wanted: pictures in which no one could name the subject or the event or some combination of important information on the who-what-where continuum. I took them because I like looking at snapshots and I thought I could work a presentation about different photographic visions from the contents of the box, considering myself clever to use family snapshots for the visuals. But when it came time to organize the presentation, I found I couldn’t do what I’d so smugly assumed that I could because the box really only contained one kind of vision. Sure, there was a variety of pictures, and a variety of views, but they were really all the same picture: a person, usually fully contained in the frame, sometimes indoors, sometimes out, sometimes beside a car or in front of a house or by a Christmas tree. Despite the pictures’ various trappings, each was the same: a person modified by an event or an object.

In grad school, I learned about the “Snapshot Aesthet-ic,” pictures in which heads are deliberately cut off and horizons purposefully tilted in an attempt to utilize the “flaws” of snapshot photography, creating an intentionally random kind of photographic vision. Such pictures are formal and completely self-conscious. But the snapshots in my shoebox were informal and completely unconscious. The makers of the photos in my box weren’t concerned with the formal qualities of photography; they were concerned with making sure the person or thing being recorded was safely contained within the picture. My mother would look at her envelope of pictures when they came back from wherever they were “developed” and chide my father if he had accidentally cut off the top of someone’s head or not centered his subject. (He never could seem to get it right.) The random, off-key photos made by people like Mark Cohen would have been completely unacceptable to Mom’s aesthetic. It wasn’t important that the faces were too magenta or the grain from her disc camera partially obliterated details, as long as she could identify the person and the person was wholly in the frame. Despite the conceits of art photography, snapshots are often carefully composed, such as they are.

Other photographs are primarily about observing, about looking at things. And outsiders looking in at something make them. Snapshots, on the other hand, are made by someone on the inside, a participant looking at things without observing them. In a snapshot, there is no objectivity, only partisanship. If photographs act as a fetish for the memory, then snapshots are the ultimate fetish objects. They’re about recording Uncle Henry, not for the purpose of observing how Uncle Henry carries himself or looks when he’s distracted, but because he’s Uncle Henry and we have to remember what he looks like. And hopefully he’s smiling because we want to recall Uncle Henry as a pleasant, even jocular fellow. Even if Uncle Henry rarely smiles, he smiles for the camera.

We’re supposed to like Uncle Henry, so to photograph him in what appears to be a compromising position would be an affront to Uncle Henry. Call it naiveté or fear of upsetting social norms; snapshots have a language based in something other than detached observation. Makers of snapshots, and there are probably billions, don’t care about observation or the objective “photographic truth” of the kind that seems to populate the world of photographic art.

Snapshots can be utterly charming; the best can border on real observation. And yet, I suspect it’s some viewer other than the maker who applies that observation. I culled the most interesting, the most “aesthetic,” the best, if you will, from the box I received from my mother-in-law, but I doubt she would approve of my choices. Mom-in-law cared that “This is Hazel.” As for me, I care mostly about the organization of elements within the frame and that strange sense of dislocation that comes from not really knowing who is who or what, actually, is going on. It’s not that I don’t care the subject is Hazel; I just care less than Mom.

Except, I care when they’re mine.

There are three photos hanging above my desk right now: a portrait of my wife wearing a blindfold prior to taking a whack at a piñata and two Polaroids of my friend Roy, taken in the 1970s. In one, Roy sits in a chair smoking a cigar, holding a Styrofoam cup of beer. Behind him is a pumpkin on a windowsill that appears balanced on his left shoulder. In the other photo, he’s wearing opaque, protective goggles that went with a sun lamp. On the bottom of the photo I wrote, “Roy in the best of all possible worlds.”

The picture of my wife is more serious, a 10 x 10 black-and-white print. But the photos of Roy are SX-70s, taken at parties, no doubt, when we were both a lot younger. They have timelessness for me; when I look at them not only do I recall Roy, I return to that time and all that went with it. And that, I suppose, is the ultimate magic of the snapshot: a way to keep time at bay at least for a little while, a way to hold on. Because photography is not only about looking and remembering but it’s also about proof, and about eternity: I stood in front of that forsythia, I was there at that party, I was. Here are the pictures that prove: I was. 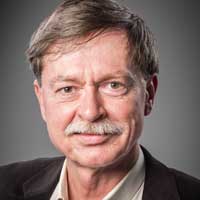 Jay Pastelak has been making pictures most of his life. He began painting at the age of eight, and received his BFA in painting from Kutztown University and his MFA in photography from the Rochester Institute of Technology. He currently teaches digital photography at The Art Institute of Philadelphia. Jay makes art photographs and resides in suburban Philadelphia with his family.