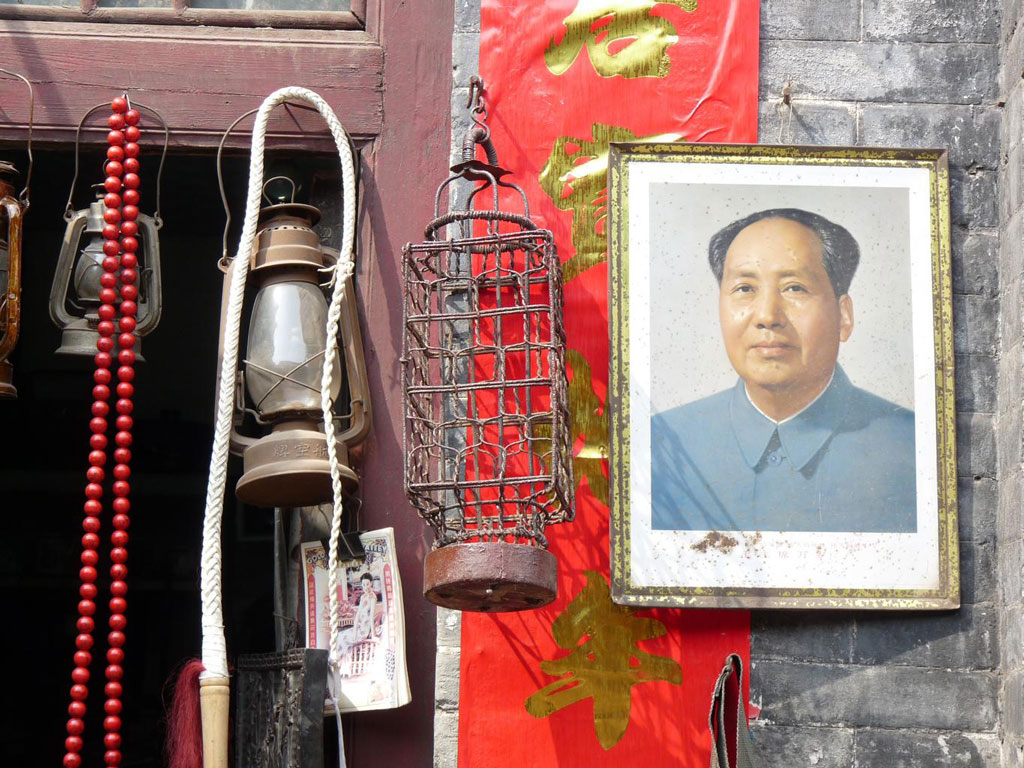 THE REVOLUTION IS NOT DEAD: I’M WEARING IT
by Holly Li

It was a dingy street stall, somewhere in the back alleys of Tiananmen Square in Beijing.

The uninterested teenage boy manning the booth flipped through a magazine while I rummaged through bins of t-shirts wrapped in clear plastic. Some were printed with Chinese words; most had faces I didn’t recognize. “An old Chinese Communist hero,” my dad would explain as I pointed indiscriminately at one and looked to him. “Another old hero,” he chuckled, as I held up yet another generic grinning face, this one with rosy cheeks and a red star cap. For seven yuan (a dollar), I could afford to buy them all, but I took my time. I made piles of favorites, weighed options carefully on a rubric of juvenile aesthetic taste and shock value, then narrowed them down. Eventually, I settled on the Glorious One: a white t-shirt featuring a smiling crowd of men and women, thrusting Mao’s bible in the air against a rising red sun. Poorly translated English reads underneath: “Careful Study Marxism and study society.”

“This is the one!” I exclaimed, as my dad paid the vendor, amused.

I was seven years old and had a strange fascination with Communism.

Growing up, I was as un-Chinese as you could get. Raised my entire life in rural towns—first in south Georgia, then in the Appalachian hills of Ohio—I’d become more accustomed to the esoteric ways of deer-hunting and bluegrass music than mooncakes and lantern festivals. I could use chopsticks and whine in my parents’ tongue, but I didn’t like the food, I’d never met my relatives, and I didn’t much care to. For their part, my parents tried their best to share stories of the motherland, skillfully wielding anecdotes of childhood famine when I complained about oatmeal for breakfast or dropping stories of the Red Police in between bites of rice at the dinner table. My parents had been poster children for the Communist Revolution: their parents had been taken away; they’d lived through the heart of the food rations (without which my dad insists he’d have grown to be six feet tall); and at the age of twelve, they’d both been selected by scouts to be sent to Olympic training camps where Communist coaches hoped to cultivate a winning team well in advance of the 1984 games and win gold for China’s first appearance on the international stage.

I took in these stories with wide eyes and childlike wonder. For a kid raised in a small Ohioan town, these stories might just as well have been legend. Thus when third grade came around and kids were finally old enough to realize I looked different, I began to look for something to explain my straight black hair and almond-shaped eyes. A Communist Revolution, I thought, now that’s something authentically Chinese! To me, it was a perfect cultural narrative: a proud, age-old civilization reborn upon the death of the last empire. An unending class struggle fought by farmers, led by a tyrannical demagogue. A sprinkle of nationalism and behold: What a dramatic battle to become something.

Finally, it was a part of my heritage I liked and felt like I understood. Out of my third-grade identity crisis came a sense of urgency to learn and love this dark history. It could redeem me on both accounts: make me proud to be Chinese; and make me cool to be Chinese.

My parents—who fled the Reds—could not understand this obsession. At dinner, they continued to imbue me with stories of political corruption, the brainwashing, the cold murder of relatives by the Party. Communism had done a lot of good for the country, they conceded, but they weren’t about to hang a poster of Mao any time soon. I did, though: two of them, in fact, in my childhood bedroom. I knew the Communists were complicated, but there was something about the saturated ink of the posters, the unabashed thick block print, and the rosy smiles of children saluting doves that demanded your attention and stirred within you a confused allegiance. The China they talked about became the only version of their homeland I could imagine; their Communist childhoods had already become my favorite epic. At lunch, my friends would talk about American Girl dolls. I would slip in quietly: “my grandpa was tortured because he was a nationalist.”

The t-shirt, then, became a prized possession. I wore it proudly as if to say: Witness me! I am indeed Chinese! My people did something gnarly! No matter that it was a few sizes too big. In between Abercrombie hoodies and Limited Too jeans, the shirt stayed constant.

Sometime around 2011, graphic tees became all the rage. There were the basic level ones: the one-word slogans in attempted laconic edginess; “Friday” in Helvetica bold on a white t-shirt. The next level was an image of some kind, a brand, or a panda. But god-level was the perfect, esoteric quirky tee: one featuring a vintage ad, perhaps, or an obscure artist’s boob sketch. Bonus points if it looked faded, featured another language, and had whiffs of politically charged counterculturalism.

I had a winner on my hands.

Suddenly, Urban Outfitters was scrambling to find any artwork vaguely Oriental. Artists and wannabes in Brooklyn were shelling out big bucks for “worn-in” old Asian souvenir t-shirts. And while the Chinese people hadn’t figured out how they felt about Communism, hipsters certainly had. Expensive Etsy shops stocked custom screen-printed Maoist shirts. Streetwear brands in L.A began to sell stickers of Mao edited with rosy Instagram filters. I can’t quite pinpoint how Communism became hot. Perhaps it was the resurgence of Kim Jong Un memes or Communism’s inevitable turn in the hipster cycle of nostalgia. Either way, my shirt was gold by all accounts. It miraculously still fit, and was soft and broken in from years of wear. Its boxy cut, the cheapest manufacturing measure then, was now the chic look on the street. Its ink, red and black, had faded and crinkled in just the right places, aspirationally weathered.

The shirt had until then been a sort of cultural heirloom to myself: unarguable evidence that I had roots and knew them. But now I was getting stopped by the hippest women all the time, usually with pierced noses, trendy bangs, and vintage mules. They luhved my shirt. Where did I gat it?

There’s a satisfaction to having the world suddenly appreciate what you always have. To me, it felt like it was time they did. Communism may just be a quirky t-shirt to them now, but the mere appreciation is enough for me. Allegations of cultural appropriation seem silly: the very fact that a teenager in Minnesota could love a shirt featuring a quote my parents recited every single day as children blows my mind, and reminds me that the world is a small and peculiar place where we can all enjoy the same things. We choose odd things to celebrate, but the very celebration of them at all is in itself a powerful thing.

Because what used to be the stories I would tell myself at seven slowly burgeoned into real appreciation over the years, as I visited the hometowns of my parents, read Chinese history books, and asked my grandparents about the Mao framed on their living room wall.

Now, as an unapologetic hipster, I can only say that I was a Communist before it was cool, that I was Chinese before it was aesthetic, and that I will continue to brandish myself proudly—even when the world moves on to the next celebrated trend of Mexican bodegas or vintage Italian sardine cans. 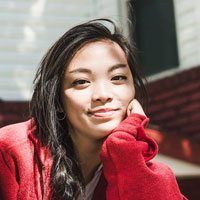 Holly Li is a recent graduate of the University of Pennsylvania, headed to the West Coast to pursue surfing or perhaps a promising career in hip-hop dance. She spent her childhood, however, in rural Ohio, surrounded by poets and hippies. The provincial nature of her Appalachian town is largely to blame for her dogged optimism, Asian American growing pains, and deep-rooted love for folk music.